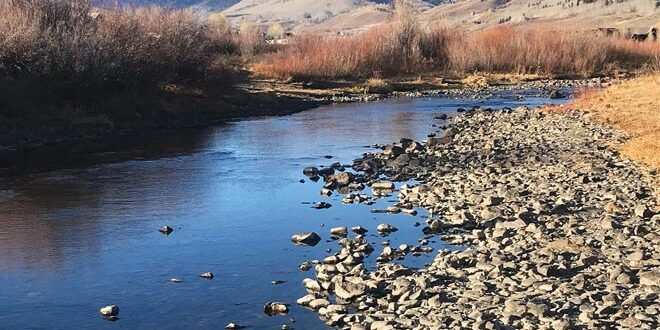 Drought in the valley a concern as low moisture impacts county

Bracing for a dry, warm winter

Between the lack of moisture this spring, summer and fall, rising temperatures and a heads-up statewide wildfire season, the Gunnison Valley continues to feel the severe effects of drought as we head into what’s expected to be a warmer than average winter season.

According to the United States Drought Monitor’s latest update on October 27, every region of Colorado is currently in at least moderate drought, with more than 21 percent of the state in the most severe “exceptional” category. The last time the entire state of Colorado had been in drought was July 2013. Most of Gunnison County is one level below, in “extreme” drought, with the northwestern tip in the “exceptional” category.

Water availability is a growing concern as we experience less and less precipitation and rising temps. Due to such dry soil moisture conditions and early warm temperatures this past spring, last winter’s average snowpack dried up very quickly and the water supply in Gunnison County “was literally disappearing before our very eyes,” said Sonja Chavez, general manager for the Upper Gunnison River Water Conservancy District (UGRWCD).

“We knew things were really dry and we knew we weren’t going to have a lot of water, and were likely going to have a deficit at the end of the year,” said Chavez. So the UGRWCD, in partnership with the Taylor Local Users Group (TLUG), made the decision to forego typical fall water releases from Taylor Reservoir in order to provide enough water for water users this summer.

This, said Chavez, meant agricultural water users would finish their only hay crop of the season, forego any potential second cut and not put fall water on their fields. “Upper Gunnison users had to go into their irrigation season having less water available to them,” said Chavez, which will then affect their crop supply. Bill Trampe of the Colorado River District estimates that hay crops around Gunnison were at 50 percent to 60 percent of normal.

The water adjustments were also intended to let recreational water users make the most of a limited seasonal water supply. But the lower water levels limited the boating season, impacted water temperatures in the fisheries and ended up funneling anglers to certain segments of the rivers. This then put more pressure and impact on those river sections experiencing higher concentrations of people.

Even though Colorado already experienced a couple of early wet snow storms this fall, bringing a little moisture to our soils and helping to tame the wildfires, Chavez said the combination of warm weather in between storms and already dry soils are not reassuring looking ahead to 2021. “The soils are like a sponge,” she said. “If the soils are wet going into winter and the water freezes and stays there, the soils will melt come spring and help get the crops going. But if you don’t have that and you go into the next season dry, it’s much harder to fill that crop.”
Crested Butte Mountain Resort has a water right to the East River and has begun snowmaking on the mountain in preparation for the winter season. According to CBMR senior communications specialist Will Shoemaker, “We pay very close attention to our water right on the East River and so far, we have been able to get off to a successful start for snowmaking.” Time will tell how much help the mountain needs from the East River versus the real deal.

The National Oceanic and Atmospheric Administration’s (NOAA) annual winter outlook calls for a drier-than-average and warmer than average winter season in Colorado, especially for the southern half of the state. This, according to the Rocky Mountain Biological Laboratory (RMBL), will likely lead to an escalation of the drought we are experiencing.

NOAA has also determined that we will enter into La Niña this winter, which occurs when the sea surface temperatures in the Pacific are cooler than average. For Colorado, this typically means the southern part of the state will feel impacts of fewer storm systems and drier winter weather—which will then impact our spring soils and water levels once again next spring, continuing the vicious cycle.

Everyone do your snow dances, and think cold, wet, happy thoughts.