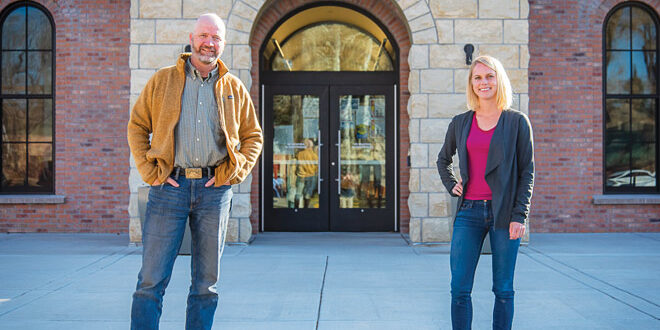 With a giant voter turnout in Gunnison County, it appears a pretty consistent party line vote carried the day for Democrats this election season, as those with Ds next to their names in the main races garnered more than 60 percent of the votes cast.

Turnout was huge, with more than 88 percent of eligible voters in the county casting a vote this year. More than 11,000 people out of the 12,448 voters in Gunnison County who are considered active took the time to vote. As of Wednesday morning, only about 300 ballots were left to tabulate, and county elections director Diane Folowell described Election Day as running very smoothly, thanks in large part to the number of people who voted early. In fact the elections office had received 9,835 ballots by Monday evening.

In the race for District 2 Gunnison County Commissioner, eight-year incumbent Jonathan Houck received 6,641 votes, or 63 percent of the total, over unaffiliated challenger Trudy Vader. Vader tallied 3,913 votes, or 37 percent of the votes cast in that race.

In District 1, Liz Smith, who was appointed earlier this year to replace commissioner John Messner, retained the seat over Republican Dave Taylor 6,516 votes to 4,202, or 61 percent to 39 percent.

In the race for U.S. Senate, Gunnison County voters followed the trend and cast their ballots for Democrat John Hickenlooper over incumbent Cory Gardner 62 percent to 35 percent, or 6,772 votes to 3,842.

Meanwhile, in the race for the Third Congressional District, Gunnison County voters supported Democrat Diane Mitsch Bush over Lauren Boebert 63 percent to 34 percent, but Boebert carried the district to win the seat in Congress.

While Kanye West pulled in 20 Gunnison County voters in the race for U.S. President, 6,976 people pulled the lever for the Joe Biden/Kamala Harris ticket over Donald Trump/Mike Pence, who gathered 3,599 votes.

Houck said he is still excited to do the work of county commissioner. “I am honored with this result from the community,” said Houck on Tuesday night. “The community knows me and it means a lot that they trust me to continue the work we are doing. Obviously COVID threw us all a curveball, but I think the direction we have been on reflects the community, and the community supports that effort. Is it always perfect? No. But we have been willing to reassess when needed and keep moving forward.

“Seeing Liz win like she did is also comforting,” Houck continued. “It demonstrated the voters want people who will work hard for the things they believe in and who are inclusive. We both tried to message that and I think people saw that difference. Folks here want people in politics who get things done and right now with as much public land as we have in the county and statewide challenges to fund housing and transportation, that sometimes means working at the state and national level. We are doing that and it is paying benefits. It is a unique time and I am excited to continue the work we are doing for the citizens of Gunnison County.”

Liz Smith said she was surprised at her margin of victory over Taylor, but she is ready to keep digging into the work of county commissioner.

“It was an odd situation to get appointed to replace John Messner as a sitting commissioner and immediately have to start campaigning last summer,” Smith said. “I am grateful to have had so many people jump in and support me in a challenging situation. But I’ve always pursued purpose over a career and I can’t imagine anything more meaningful than to take on as a commissioner the challenges the county is facing. There is nothing more meaningful to me than the work the commissioners do, so to be able to get out of bed every morning and work to make the community better is a great opportunity.

“Looking ahead, Jonathan and I have talked and agree affordable housing is a top priority,” Smith continued. “The Mt. Emmons situation with water quality issues is an area I’m ready to dig into. I am really looking forward to working with and learning from Jonathan and Roland [Mason]. I think I’ll bring a different perspective to the board—we may not always agree but we’ll figure it out.”

Houck and Smith will officially begin their new terms in January.

As for the election itself, Gunnison County clerk Kathy Simillion and elections director Diane Folowell both reiterated that new technology used in the office, along with people turning ballots in before Election Day, made the 2020 election a smooth one.

“Given it was a presidential election and we were dealing with a pandemic, everything went really well,” said Simillion. “People were able to vote easily and the protocols we put in place kept everyone safe. The county showed the same trend as the state, and people voting early made a huge difference and allowed us to keep up with the counting.”

“It was extremely smooth this year. The new machine we purchased that helped verify signatures really helped,” added Folowell. “Thanks to everyone who stepped up and got their ballots back early.”

The office will continue to collect ballots cast before 7 p.m. Tuesday. Those include ballots coming from the military or overseas voters. They will also work to rectify problems that came up with signatures until November 11. Folowell said they hope to officially close out the election the week of Thanksgiving.

Further down the ballot, county voters overwhelmingly agreed to raise property taxes to fund water in the region, as ballot issue 7A was approved here 78 percent to 22 percent.

Local voters also agreed to impose a new tax on nicotine products, while rejecting state limits on abortion and the reintroduction of grey wolves into the state.