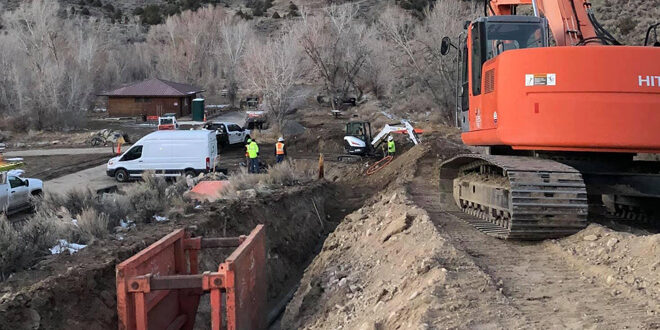 A contractor putting in a water line near Cimmaron cut through a CenturyLink fiber line Thursday morning and that resulted in most cell phone and Internet service going down in Gunnison and Hinsdale counties. That included the ability for people to call 911 in an emergency. County officials scrambled to make sure emergency services were at the ready and in the end, the approximate 10-hour outage showed how fragile the area’s connectivity is.

The outage certainly brought stress to some — 911 capability was lost while those who work remotely from the valley were cut off without warning — and bliss to others who were forcefully disconnected from the outside world.

“Like so much we normally take for granted, when the technology we rely on is working, it is great,” said Crested Butte chief marshal Mike Reily. “When it doesn’t, it is really frustrating.”

The outage occurred about 8:30 a.m. on November 12.  Local Internet aficionado Corey Bryndal realized there was a problem when the outage dragged on for hours. He figured the fiber line was cut between Gunnison and Montrose and went to investigate. Driving toward Montrose, he saw workers dealing with the situation and chatted with them while they worked. “A contractor working on a water line in the morning fell victim to insufficient utility locates,” he said. “The old MNT/CenturyLink fiber line installed in 1995 made a difficult jog in its route near the Cimmaron Visitors Center campground.”

He explained the line was not clearly documented at the time and the contractor working Thursday morning accidentally found the fiber. “Contractors completed installing a new fiber-cement hand hold about 6 p.m. this evening and immediately began splicing and cable repair work.” That took about a half hour before service was restored.

Service was restored at 6:31 Thursday evening.

Reily said he was at home and realized he had no Internet and phone service. “I didn’t know if it was the end of the world or a local problem,” he said. “I came into town for a morning staff meeting and the hardest part was trying to figure out the situation. We had no way to do that. It was a little weird.”

He and Crested Butte town manager Dara MacDonald walked over to the CB fire station to see if they had more information and determine what plan could be put in place.

“While we were meeting with their staff someone came in and said his friend was having a major health issue,” Reily relayed. “The EMTs responded to the medical emergency and that indicated to us what people would do with 911 capability not being up. They would go and seek out emergency personnel at the fire stations and law enforcement offices.  So we sent people to be at all the fire stations in the valley. Our radios were working so that allowed emergency personnel to communicate. We figured that is where people were going to go if they needed help and they did. That was good.”

“I was quite pleased with the level of countywide cooperation,” he said. “The County Emergency Operations Center (EOC) was coordinating our efforts within an hour of the outage and I spent most of the day at the EOC in Gunnison serving as a link to the North Valley. We were able to quickly staff (by 10 a.m.) all of our fire stations with personnel who could receive reports of emergencies. The statewide public safety radio system remained operational so we had good communication amongst responders all day. The adaptability of our local police and fire personnel was also commendable as we worked through the day. The Town governments and School District were also eager to help and were a pleasure to work with.”

Reaching out to the public…and GVH stayed online

Reily said they eventually figured out that some CenturyLink landlines were also working so they could communicate via fax with places like dispatch in Montrose. “We tried to get situational awareness as best we could,” he said. “We had no idea what was going on or long it would last.”

Caffrey said his crew fielded a ton of public inquiries about the outage itself. Reily said he and his officers elevated their presence in town to answer whatever questions they could. Signs were put up to inform people how best to handle emergencies by seeking out responders at the fire stations. Information was also placed on KBUT and other local radio stations since they were able to broadcast during the outage.

At least one entity in the county did not suffer a complete outage. Gunnison Valley Health did not lose Internet or phone service within its network.

“Yes, the hospital has a redundant Internet connection that is not tied into the CenturyLink fiber line that keeps getting cut between Gunnison and Montrose,” said director of information systems for GVH Trevor Smith. “We have a microwave tower that connects GVH by way of W mountain, over to the Monarch Ski area and down into Salida that provides us with a 100mb redundant Internet connection that is not tied into the CenturyLink dark fiber. This is what allows us to maintain essential services during Internet outages. Still, the hospital was impacted. Our phones were down outside GVH. We contract for phone services with a provider that uses CenturyLinks fiber. So, we did not have phone service outside of the hospital but we did have in-house phone service.”

Caffrey said there were indeed lessons learned from the Thursday event. “We figured out that Friday the 13th can sometimes come a day early,” he quipped. “We absolutely need redundant telecommunications infrastructure. We can’t be reliant on a single piece of infrastructure for 911 service, all forms of Internet service, cellular communications and telephone switching. Additionally CenturyLink, and I assume many other telecommunications providers, rely on multiple subcontractors from all over Western Colorado who take time to assemble, locate and repair outages. It was also interesting to find out that there apparently is redundant fiber optic infrastructure running over Cottonwood Pass that is not yet hooked up.”

Virgil Turner of Region 10 has been working to expand broadband capacity throughout the Western Slope for years. He told MacDonald on Thursday that the group had received a proposal for a circuit from Gunnison to Denver using the Cottonwood Pass route. “Lumen was going to complete the Cottonwood Pass build this year but was delayed due to COVID,” he said. The hope was to complete it by end of November 2020.”

But that is then and this is now. Caffrey said local personnel went old-school. “We were glad that we have an adequate supply of handheld radios and spare batteries,” Caffrey concluded. “We also got some utility out our of our two satellite phones which we otherwise don’t use very much. We may look at maintaining a few more analog phone lines. We were also glad we still have a siren on the roof should we have needed an alternate method to notify our members or the public of an emergency. We also seem to have gotten rid of all of our FM radios in the age of streaming and will probably make some minor investments in having FM radio and over-the-air TV available in our stations.”

Some loved it – others hated it

In the meantime, the fragility of the single line system put some locals on edge knowing that 911 was down and some people need more regular access to emergency responders than others. Several people that rely on the Internet for work realized the outage could last most of the day so they packed up their computers and headed to Montrose to work. Still others took advantage of not having global connectivity and picked up a book or took a ski up Snodgrass. No matter what you did, like Reily concluded — technology is great when it works and frustrating when it doesn’t.

We will have more information on the outage and potential for further redundancy in next week’s edition of the Crested Butte News.