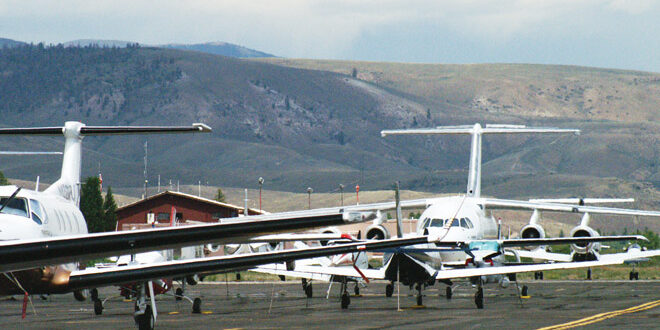 Private planes coming into the Valley at record numbers

Despite its quiet, humble location in the southwestern corner just outside city limits, Gunnison’s private aircraft facility is increasingly becoming a hotspot for jet setters. Even as commercial aviation numbers are down in 2020, the Gunnison Valley has had more private planes touch down than ever before. And that may be an indicator of what is to come this winter.

Airport managers have reported a substantial increase in airport activity beginning in early July. Gunnison Crested Butte Airport (GUC) manager Rick Lamport said that in 2019, which was a strong year in its own rite, the airport counted 1,296 operations between January and August. That number includes all landings and takeoffs, whether commercial or private.

This year, GUC has counted 1,772 for the same period despite reduced commercial flights.

“Fortunately for us, when this [pandemic] all went down, we lost the last half of March in terms of commercial flights. But we were on the cusp of our mud season anyway. So it could have been worse, but… we didn’t lose as much as we could have if it had happened in January or July,” said Lamport.

GUC was down to just three commercial flights per week during the March and April shutdown period.

“Then we had a good summer. We didn’t have Houston flights, but our Denver flights did well. It certainly was busier,” said Lamport.

Lamport and general manager Chris Flynn of Avflight Gunnison, the company that runs GUC’s fixed base operator (FBO) down the street from the commercial operations, say the private flights also continued much later into the fall than in the past. Both managers agree that the increase is due in some part to people avoiding commercial flights due to coronavirus risks, and in some part to an overall tourism boom the Gunnison Valley is experiencing as a result of the pandemic. Either way, it is good for business.

“People were wanting to get away and they were not wanting to do that by commercial airline,” said Flynn. Avflight, a private organization, rents plane ramps, buildings and airplane hangers from the county.

“This summer we probably averaged 15 to 20 [private] planes per day from July through Labor Day,” said Flynn. “And we were busy longer than usual.”

Flynn could not disclose where those planes are originating, and said he sees a wide variety of different aircraft types.

“We see all kinds of aircraft on a day-to-day basis, from small propeller planes to large corporate jets,” he said.

As Lamport explained, “Many people who choose to fly privately do so because they don’t want to be tracked. They want to remain private.”
“A lot of these were people who didn’t want to fly commercially, and many do a plane share,” said Lamport. “That happened a lot this year and that is more common… but it was a mix and match of all planes, all different types.”

Private flights do not have to be scheduled in advance, and they do not pay fees unless they choose to park an aircraft for an extended period of time, rent a hanger or buy fuel from the GUC for an added surcharge of 12 cents per gallon.

“It’s like someone getting on a highway—they just go,” said Lamport. All flights are subject to being managed while in controlled airspace, he said, but otherwise they are free to come and go.

“People can file visual flight plans and they try to sequence these things. But we don’t always know because we don’t have a control tower at GUC. Sometimes we learn more about them as they are asking for fuel or catering. It’s a whole different world over there,” said Lamport.

Since GUC provides parking, fuel and hangers for Avflight clients, it has seen revenue increases this year with all the additional business. To park overnight, a small propeller plane is charged $7.50 per day, while a Gulfstream-five, for example, is charged $52 per day. Monthly fees are $100 for small planes and up to $700 for the largest.

“It’s been good for the airport,” said Lamport. “And we also sold more gallons of fuel.”

Flynn said revenue is also up for Avflight, and although things have been quiet in the offseason, he expects it to pick back up around this week as the holiday season begins.

The numbers aren’t in yet for the third quarter, but off-season has been shorter than usual. Lamport said the busy runways continued well into October. “When you sit beside the window every day, you can see it,” he said. “But where they are going or coming from, nobody knows.”