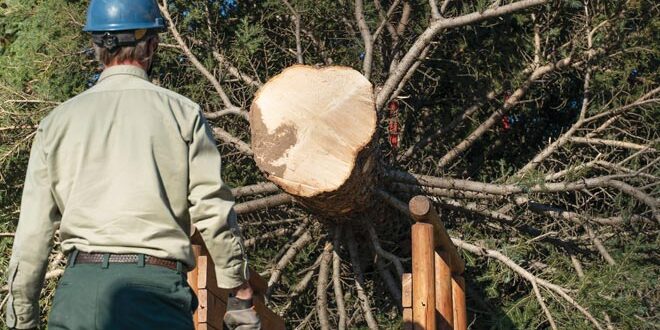 The temperature last Thursday, November 5, was unseasonably warm for early November at 9,000 feet on the Uncompahgre Plateau. A tall, stout man with a long, mustache-less beard ground an orange Stihl chainsaw through the trunk of a massive evergreen in front of 100 mostly-masked spectators. Harvey Gray is a sawyer and a 50-plus year veteran of the logging industry in the West.

“I’ve cut a lot of trees, so it wasn’t a whole lot different… But it was kind of neat, cutting one for the Capitol Building,” Gray said.

The 55-foot Engleman Spruce—soon to become a national treasure—was plucked from the Grand Mesa, Uncompahgre, and Gunnison National Forest (GMUG). This is the first time the national tree has come from the three-million-acre GMUG.

The official Capitol Christmas Tree is making its way to D.C. and will be on display from 2 to 4:30 p.m. on Thursday, November 12 at the Gunnison Community School. Everyone is welcome to come take a look.
Beth Anderson is a soil and water specialist with the GMUG and was one of the employees tasked with finding a tree worthy of national display.

“We knew we were the 2020 Christmas tree before the field season started,” Anderson said. “So we encouraged employees to go out and find the tree. We had parameters: ‘Does it look like a Christmas Tree, size, shape and what not?… As we were out doing our work, we would sometimes say ‘That looks like a good Christmas tree!’”
In a typical year, the U.S. Capitol architect would visit the national forest and hand-select a tree. But with COVID-19, 2020 is anything but typical. So GMUG employees identified 15 finalists, and put them through what Anderson called a “pageant of trees.”

Anderson explained, “Because of COVID, traveling was not going to happen, so we did it virtually. We took lots of pictures and video of the trees in the forest and sent that to [the architect] and had a meeting with our new way of conducting business—online—and he selected the tree from the 15.”

James Mills is the official photographer for the U.S. Capitol Christmas Tree and has documented the tree from national forests to its final resting place in Washington, D.C. since 2015.

This is Mills’ second trip on the U.S. Capitol Tree Tour during an election year. “Inevitably, there’s some political strife going on at some point. But what is amazing is that politics never enters the picture. No matter who we’re talking to, we collectively agree that delivering an evergreen to the people of America in Washington, D.C. is an amazing thing.”

While the tree is an annual tradition, Mills says it’s more than just a mark of the season.

“It symbolizes peace in our time,” he said. “It symbolizes for me the hope of what America can be… This is indeed the people’s tree. It is a reflection of all of what we collectively own as citizens of this country. This is yours… [Let’s] make sure a generation from now we will have trees and a forest… so we can keep doing this for another 100 years.”

Montrose County is staunchly conservative and voted nearly 2-to-1 for Donald Trump over Joe Biden. But no scent of national politics wafted through the air at last Thursday’s ceremony as the nation awaited the final tallies of the election. Keith Caddy, Republican chairman of the board of the Montrose County commissioners, spoke of the spruce as an emblem that can inspire healing in a nation desperate to move beyond conflict.

“I hope this tree, in some small way, will bring some unity to the people of this country, especially in Washington where things are all hectic and hateful, where people aren’t getting along at all,” Caddy said. “Maybe just for a few minutes, they can stand around the tree and leave it—leave it in the Senate, the House, the President’s office—and join in peace and harmony, just for a few minutes. I hope that’s what we can give the people in Washington.”