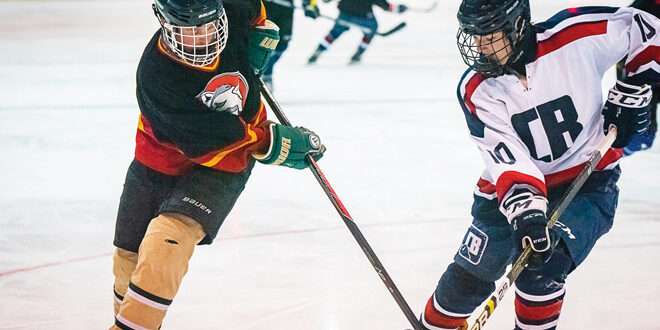 It really came down to who wanted it more when the Crested Butte Titans/Wolfpack alumni team took down the current Titans high school hockey team 6-5 in the annual Alumni Game at Big Mine Ice Arena on Saturday, December 26. And it wasn’t easy but as the game wore on, the alumni, surprisingly, did not wear out.

Alumni player Ben Reaman, who opted to sit this game out, said it best after the first period: “It always comes down to legs in the third period.”

Typically it’s the young guns with the legs in the third period as they have yet to debilitate their bodies with the lure of adulthood freedoms. Furthermore, the current high school team has been training diligently all fall and early winter including a successful club hockey season so fitness was on their side.

Regardless, it comes down to who shows up and the alumni definitely showed up. True, glances at the alumni bench showed their propensity for adulthood freedoms but, despite that and some pre-game subterfuge by the father of both an alumni player and a current high school player attempting to dull the senses of some of the alumni players, the alumni remained focused and disciplined enough to pull off the win.

But confusion among the alumni took hold following the penalty kill and the high school team opened the scoring in the eighth minute when Matthew Trujillo slipped a pass to Jack Lambert and Lambert scored.

Their lead barely lasted though, as the alumni tied the game back up soon after. Dylan Curtiss picked off an errant breakout pass and fed Sam Reaman in close with a quick pass and Reaman stuffed the puck through. Cam came up with two more key saves toward the end of the first period and the two teams were notched at one apiece.

The high school team then heeded the words of their extensive coaching staff on hand and took control of the game in the opening two minutes of the second period. Piccaro scored in the first minute of the period and then Lambert followed soon after with a goal for a quick 3-1 high school lead.

The alumni cut into the lead in the eighth minute when Joe “Willy” Coburn tipped a shot by Dylan from the point but the high school responded with two goals over the span of one minute to go up 5-2.

This is often when things unravel for the alumni as their legs typically grow tired and they resort to one-man showboating to try to salvage some of their self-respect when getting outplayed by a bunch of high school players. Remarkably though, they did not resort to old habits. Rather, they kept line changes rather fluid and shifts quick and continued to pass the puck rather than showboat. That, coupled with putting a red hot Shaughn Rourke in net, then set the stage for an alumni comeback, alumback.

It started when Dom Piccaro threaded a pass to Reaman for a goal in the 10th minute of the second period, building some momentum for the alumni. Rourke made some big stops at the start of the second period and the alumni continued to gain traction. Reaman scored in the third minute of the third period when the alumni won a faceoff in the high school zone and Reaman stuffed it top shelf.

The high school woke up from their sleep midway through the third period to set up a couple of great chances on net but Rourke continued to stand on his head in net.

Jack Collins then tied the game up 5-5 with five minutes left in regulation and two minutes later Sam Stepanek struck for the alumni for their first lead of the entire game. Rather than get caught up in their success, cooler heads remained among the alumni and they called a timeout with 90 seconds left to catch their breath and regroup for one last stand.

The high school team pulled their goalie and came oh-so-close to tying the game but struggled to find any cracks in the alumni defense and the alumni held on for the 6-5 win.

Stay tuned, hockey fans, as the adult coed town league season is slated to start on January 4. The high school season has been pushed back due to the latest COVID surge statewide but they hope to open their season in late January.