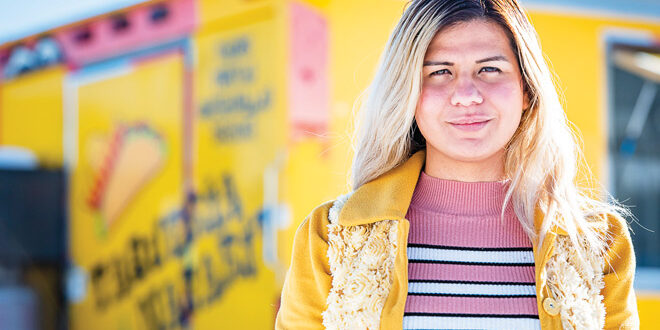 It was a new day, indeed a brand new beginning, for Liliana Alvarado when she made the choice to move to the United States in 2013. Her family encouraged her to relocate after a violent and traumatic experience in her life essentially forced her emotionally to seek a safer place to live, a place where she didn’t have to live in fear. It was one of the best decisions she could have made.

Liliana was born and raised in a town about the size of Gunnison called Santiago Ixcuintla, in the state of Nayarit in Mexico, and only 35 minutes from the local beach.

She grew up with five siblings and a large extended family that included 23 aunts and uncles and numerous cousins, and they were all close family. Her mother owned and ran a seafood restaurant while her father worked in construction. As a young student, Liliana was a shy, studious kind of kid who liked athletics, running competitively for her school and traveling all over the state for competitions. She graduated from high school in 2008 and moved three hours away to Puerto Vallarta to work.
“I started as a housekeeper for a big five star hotel. The owners were from Spain. I was trying to see what I liked for work,” Liliana says of her four years there. Her father’s family owned an automotive parts store in Tijuana so she relocated to work sales. “It’s crazy weather in Tijuana—one day it’s hot, the next day it’s raining and in winter it’s really cold down there,” she recalls.

“Tijuana was good, but something very bad happened to me and that’s what caused me to move to the United States,” she says of the violent personal affront that sent her seeking a safer environment. “I was 23 and felt I had to move to a place where I felt safe.” She had family in Colorado who implored her to come, assuring that she’d be safe there. “It was difficult thinking about leaving my family, especially my mom, but I just wanted to be safe at that time.”

Liliana first moved to Stockton, Calif. in 2013, living with her aunt and doing housekeeping for work but with no papers, she was only making $6 an hour. Six months later, in 2014, she moved to Gunnison where her sister and brother-in-law were living. “It was a big change, especially weather-wise,” she laughs. But she arrived in August to the valley’s long, sunny days, “It was a beautiful town and I fell in love with Gunnison.”

She found housekeeping work throughout the valley, working for a company. “I like to work so I work all the time,” Liliana says. “I don’t really have hobbies. I just want to work and save money because I support my mom and some of my siblings in Mexico,” she tells of the traditional and typical Mexican culture where the younger kids always care for the parents. “Always,” she emphasizes. The culture is set up so that the older kids leave, marry, and by time the younger kids are grown and able to work, the parents are along in their years and need to be taken care of. “My mom got a tourist visa so she can come visit in America now, but only in the summer because I don’t think she can come in winter. It’s really cold for my mom.”

In 2017 Liliana finally received political asylum in the United States and started her own cleaning business, Luxury Western Cleaning LLC, working all over the entire valley.

With four different businesses, the entrepreneur is not kidding when she states that she likes to work. Her retail shop, Lili’s Boutique on Main St. in Gunnison, features not only clothing but traditional Mexican foods and sundries, like breads, cookies, candies and the real deal Mexican Coca Cola. “I opened the boutique because I love clothing and I figured it would be good for my community,” she says. She originally had a salon in the boutique but her stylist moved and she hasn’t been able to replace her. Liliana also created a rental management company, Property Alvarado.

As if that wasn’t enough, she and her husband also have a construction company, Alvez Construction LLC, which does remodeling and “everything carpentry,” she says. She met her husband, Amado, in 2016 at a friend’s Latino Mardi Gras party in New Orleans. “He was the only Mexican there, everyone else was Central American. I was lucky because he was not only the only Mexican, he was single too,” she laughs. A month later and after many conversations and much correspondence, he sold everything he owned and moved to Gunnison to get to know Liliana better. They married in December of 2018.

What’s got everyone excited and buzzed about is Liliana’s newest venture, Taqueria Nayarit. “I was on Facebook and saw this taco cart for sale and decided a taco truck cart would be good for the valley. People are really excited about it. They text me every morning to see if we’re opening that day. We had been planning the cart and had applied four months ago,” she says.
“We finally opened the food truck November 16 this year. Our taco truck has quesadillas and tortas too,” she explains for the uninitiated that a torta is like a French baguette stuffed with beef or pork and topped with cilantro, onions, guacamole and red hot sauce. Currently, her food truck is operating out of Skyhigh Offroad’s parking lot in Riverland and is open 11 a.m. to 3 p.m., Monday through Friday.

If you’re wondering where Liliana finds the time to run all these separate businesses, she explains her well structured and disciplined lifestyle schedule: “Mornings, I’ll get up at 5 a.m. and run to Crested Butte to clean offices and rental houses with my cleaning company. Afterwards, from 9 a.m. to 11 a.m., I’m in the kitchen at Montanya’s preparing the food for the cart. I found an angel in Crested Butte, Karen Hoskin, who allows me to share her kitchen.”

When Liliana closes up Taqueria Nayarit for the day, she heads back down valley to Gunnison to open her boutique at 3:30 p.m., closing its doors at 8 p.m., Monday through Saturday, and finally heads home. “My husband picks me up so we can have dinner together, talk about our day and watch movies and the news.” Before Liliana trots off to a well earned sleep for the night, she’ll check her tight schedule for the following day, do bookwork and accounting and plan her next week. At 5 a.m., Liliana rises to start her work day all over again.

“But I love work and the opportunity and I love to represent my Mexican culture in the valley with my store and my tacos,” she smiles proudly. As for starting any more businesses she laughs, “No, I’m fine right now. I feel free, starting a new life in a new place, in a new country. Gunnison people are good, they’re friendly and they’ve taken me in as a local. We like to support the local stores, especially Six Points. Every year we’re excited for the rodeo and go to all the Cattlemen’s Days. Mexico is my heart but I feel at home in Gunnison. I feel good here. I know more people. I’m grateful every day for my entire community. I don’t ever want to move anywhere, I just want to be here.”