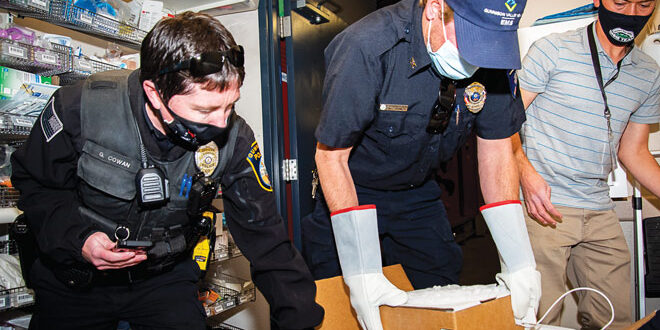 Two local doctors and a resident of the Gunnison County Senior Care Center were slated to be the first to receive the COVID-19 vaccine in Gunnison County late Wednesday afternoon at the Fred Field Western Heritage Center at the county fairgrounds.

Dr. Lor-Anne Gibans, geriatric physician for the nursing home residents; Dr. Shay Krier, Emergency Department physician and medical director of EMS, who also won the Colorado EMS director award for 2020; and Lucy Hudgeons, a resident at the Senior Care Center, were the first to roll up their sleeves and receive the first of two injections of the newly approved vaccine. They will each have to get a second dose in three weeks.

“These are some of the highest risk and frontline folks dealing with the coronavirus,” explained Gunnison County public information officer Andrew Sandstrom. “Part of the reason they were selected to be the first ones in the county to get the vaccine is to show it is safe and set an example for the community.”

The vaccine arrived at the county Health and Human Services building on Spruce Street in Gunnison about 1 o’clock on the afternoon of Tuesday, December 15. The 300 doses allocated to Gunnison County came via FedEx and were packed in dry ice to keep the vaccine extremely cold. It was then transferred to one of the county’s ultra-cold –80°F freezers. The plan was to distribute the first doses of the vaccine at the Fred Field Center Wednesday from 5 to 8 p.m. in order to catch local health care workers either leaving their shift or coming on to their evening shift.

The county’s vaccine distribution plan has several tiers. The first group prioritized to receive the vaccines is health care workers on the front lines of the pandemic, along with those living in senior housing. The hope is that a state program organized with Walgreens will take care of the vaccinations for those in Colorado’s senior care facilities. But if that doesn’t happen in a timely fashion, the county will include those local people in the priority group. Not including the senior care residents, there are 420 individuals expected to get the vaccine as soon as possible.

The second priority group will be other health care workers in the valley who have less regular direct contact with coronavirus cases. That would include first responders and medical office personnel, for example. That group is estimated to have between 800 and 1,000 people.

From there, higher risk individuals and those with underlying conditions; people over the age of 65; and those with diabetes, for example, would be next in line. School staff and other workers with a lot of public contact such as employees of grocery stores would be next, followed by the general public.

As far as timing, Sandstrom said that depends on the regularity of the vaccine shipments. The hope is to have the first group vaccinated this winter, the second group this spring and everyone else sometime this summer.
Because both the Pfizer and Moderna vaccines take two does to be complete, the federal government will hold back the second doses and send them at the appropriate time for the second shot. “We ask people to get their second dose at the same location they received the first one,” said Sandstrom. “That will help everyone keep things straight.”

While this first batch that arrived Tuesday is from Pfizer, the Moderna vaccine is expected to get federal approval this week and Gunnison County should see a delivery of that vaccine during Christmas week. The expectation is to receive between 600 and 800 doses that would then be administered either the week between Christmas and New Year’s or shortly after New Year’s.