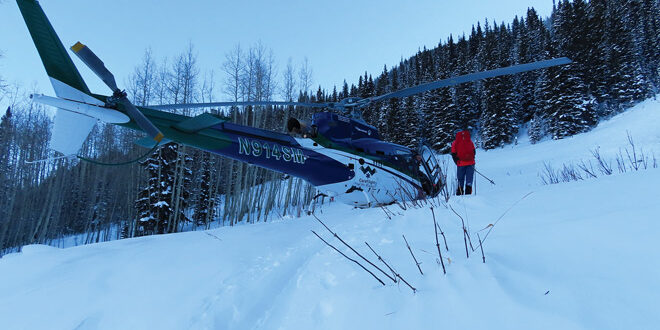 Local man injured in an avalanche on Snodgrass

Crested Butte Search and Rescue (CBSAR) was called into the field on Tuesday, December 15 at 2:28 p.m. to respond to an injured man who had been carried between 200 and 300 feet in a soft slab avalanche through trees on Snodgrass Mountain. According to Mt. Crested Butte police chief Nate Stepanek two hours later the injured man, 42-year-old Ian Schaul of Crested Butte, was in a CareFlight helicopter bound for Grand Junction with a severe lower leg injury.

Schaul and his partner were on a northeast aspect of Snodgrass Mountain at around 10,000 feet in elevation when the avalanche occurred. CBSAR president Randy Felix confirmed the party was able to make a 911 call from their position and rescue teams jumped immediately into action.

“We had 15 members of CBSAR respond,” says Felix. “It was a good turnout.”

The call was made to get a helicopter en-route as well and CareFlight 4 out of Montrose was airborne, headed to the location of the accident as determined by GPS from the 911 call. Meanwhile, CBSAR initiated their response, sending a hasty team out Gothic Road.

“The Crested Butte Fire Department captain recommended to get a helicopter coming and we had a hasty team on snowmobiles to get eyes on it from Gothic Road,” says Felix.

CBSAR worked in conjunction with CareFlight to get a plan in motion and things just fell into place to expedite the response.

“We were in contact with the helicopter and made a plan that they would do a fly-over,” explains Felix. “They radioed back and said they had a suitable LZ [landing zone].”

Ultimately, the helicopter was able to land on a flat area 300 feet above Gothic Road, between 100 and 200 feet below the victim.

“It was a super impressive backcountry landing on a bench surrounded by trees,” says Felix.
The helicopter has a flight paramedic and a flight nurse on board and the CareFlight team was able to reach the victim and transport him down the slope toward the helicopter. The CBSAR hasty team then joined Care Flight to assist in the transport and had Schaul loaded on the helicopter and in flight just two hours from the initial call.

“The helicopter crew and CBSAR team made the decision to use the rider’s snowboard as a makeshift rescue sled to help get him down to the helicopter,” says Felix. “It was remarkable how close they were able to land and get him out of there before dark. It’s never guaranteed, it just happened to come together and it was super fortunate because he had some significant injuries.”

The Crested Butte Avalanche Center (CBAC) has been touting the current hazards regarding the snowpack for several days since the last storm rolled through.

“We got one to two feet of snow on a very fragile weak layer over the weekend and since then we’ve had over 160 natural and human-triggered avalanches,” says CBAC lead forecaster Zach Guy. “Our advisories the last four days have been highlighting dangerous avalanche conditions and easily triggered slab avalanches.”

This avalanche occurred on the border of the southeast mountains of the CBAC forecast area; the avalanche danger rating for this aspect and elevation was moderate the day it occurred. And while the avalanche was relatively small, even smaller avalanches can have severe consequences.

“In this case it was a small avalanche, D1.5, approximately one foot thick,” says Guy. “Small avalanches can have larger than expected consequences if they push you into a terrain trap such as trees or a gully.”