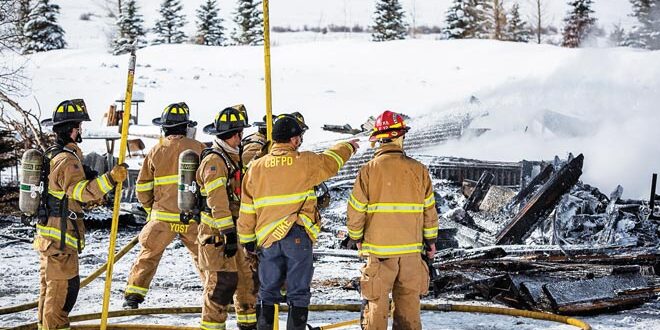 No human injuries but lots of loss

A major house fire that started late Monday night two miles south of Crested Butte across from the Brush Creek Road turn has left eight people homeless. While no one was injured in the incident, the residents of the two-unit rental property were forced to quickly evacuate the premises and lost everything in the fire, including two pets.

Crested Butte Fire Protection District fire chief Rob Weisbaum said the blaze appears to have started accidentally in a wood-burning stove located in the lower living unit. “We’re unsure on the exact cause; however, it is suspected that nearby combustible items, ash trashcan, an old chair and ski clothing, could have been the items to progress the rate of spread,” he said. “In addition, the glass on the stove door was blown out for unknown reasons.”

The emergency call came in at 11:23 Monday night and firefighters worked through the night to control the fire. “One of the occupants on the third floor woke up when he smelled smoke and heard the smoke detector,” explained Weisbaum. “He immediately went downstairs from the third level, saw the fire and quickly notified the other tenants to get out of the building. Another of them called 9-1-1 right away.”

All of the people in the home at the time, a family of four and four single residents, evacuated the property safely, according to Weisbaum, and no one suffered any injuries or illness as a result of the fire. Two pets, one cat and one dog, however, did perish in the fire.

Mt. Crested Butte police chief Nate Stepanek said not everyone was home when the fire started. “James and Regina Tafoya with their two sons lived on the third floor and were in the residence at the time,” he said. “Gavin McLaughlin, Elina Smith and Eric Rankin were on the second floor at the time. Michael Sharan and Harry Hudson reside on the first floor and neither was home at the time of the fire. Sharan arrived after the fire had started and Hudson is out of town. From the interviews that have been conducted, we believe it was accidental in nature.”

“The Crested Butte Fire Protection District had 14 members respond,” said Weisbaum. “We requested assistance from Gunnison Fire, who brought seven volunteers and Gunnison EMS, who brought two members. We had a total of three fire engines, three tender trucks, two ambulances and two chief vehicles. It was a big call.

“We used approximately 40,000 gallons of water and 40 gallons of Class A foam,” Weisbaum continued. “The house is currently smoldering and poses minimal risk to surrounding areas. We are making a game plan now to either fill the burned area with earth and snow and blanket the smoke or let it burn out over several days.”

The house’s owner George Gers said he and a partner began building the house in 1980. He began long-term renting the bedrooms and eventually the apartment in the 1990s. “It seems there has been a cast of thousands that have lived there. The countless potlucks, bonfires, dance parties, and gatherings thru the years have been amazing,” he recalled. “All the calls I’ve been receiving from past tenants, friends and roommates expressing their disbelief and condolences about this tragic incident have been gratifying. And the Aloha spirit upwelling in this community with offers of help, lodging, etc. that we’ve already received to help those that are now in need has been impressive.”

Weisbaum said the last major house fire the district responded to occurred about this time of year in 2015 near Coal Creek on Maroon Avenue.

He offered some advice for everyone. “The best advice is to be sure that your fireplace or fire stove is cleaned regularly and ensure there is not creosote buildup in the chimney,” he said. “Ensure that there are not normal combustible items near the fireplace/stove either. Limit any clutter near the fire. Routinely clean out old ashes, make sure they are cold to touch and dispose of them properly and immediately. Never leave a fire unattended and extinguish it prior to going to sleep.

“Make sure you have fire extinguishers in your house and they are checked annually to ensure they are holding a charge and will be effective,” he added. “Have and know escape plans in the event of a fire. Check your batteries for your detectors every year and replace them at the same time. These are all little things one can do to ensure you get out safely.”

Weisbaum said the obvious support of the community in a time of need makes his job easier. “This was a very unfortunate event that affected the lives of many community members. In a very short amount of time since this incident, there is already a GoFundMe page set up to help support these individuals. This is a true testament to the kind of support Crested Butte provides to those who face a life-changing crisis. Lacy Construction also helped out big time by providing a heavy excavator. This helped us remove the roof that had collapsed and limited us getting water to the fire underneath. Eric Tunkey at the Gas Café provided hot coffee and food in the early morning hours. We are so appreciative of the community efforts to help us out in our time of need as well. Thank you for stepping up, as always, Crested Butte.”

Concern about Critical Race Theory being taught in local schools