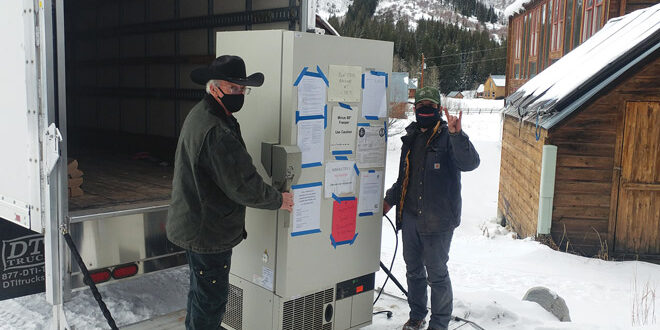 Public will likely not see vaccines “until spring or summer”

Gunnison County is as primed as possible to receive and distribute the coronavirus vaccines that are expected to come online in the next several weeks, and may become a primary distribution location for the Western Slope. The Center for Disease Control and Prevention (CDC) has announced that they will allocate doses to states by population and notified Colorado that we should expect 1.69 percent of the CDC weekly allocations once they arrive.

With existing ultra cold storage at the Health and Human Services department and additional units on loan from Rocky Mountain Biological Laboratory (RMBL), the county has the means to store and transport the two vaccine types that require the specialty freezers.

Gunnison County public health director Joni Reynolds’ extensive previous experience with infectious diseases and vaccines and the county’s success at organizing a response to the pandemic are also working in its favor. For now it is simply a waiting game and officials remind everyone to continue social distancing, wear masks in public and practice every precaution to prevent the spread of the virus, as the vaccine will not be widely available for months to come.

Vaccine storage
Rocky Mountain Biological Lab (RMBL) executive director Ian Billick, who is also on the county’s COVID-19 response team, explained the challenges of managing the two front-runner vaccines likely to be released late this year or in early 2021.

“Two of the vaccines [Pfizer and Moderna] use completely new technology involving messenger RNA (mRNA) to invoke an immune response. The mRNA is not stable and so it is packaged in little lipid packages. The mRNA and lipid packages degrade easily so they need to be kept at very low temperatures as long as possible,” said Billick.

RMBL has two –80 degree Fahrenheit freezers, funded by The National Science Foundation and Department of Energy/Lawrence Berkeley Lab. And they are not in use over the winter. “These freezers allow scientists to bridge the local ecosystems and the analytical power scientists have back in their laboratories across the world,” said Billick. “With these freezers, scientists can freeze biological processes in place, ultimately shipping them on dry ice back to their home institutions and all of their equipment there.”

Since the freezers are not needed for the coming months, RMBL agreed to lend them to the county’s COVID response effort.

“The community has been so supportive, RMBL and one of our core partners, the Lawrence Berkeley Lab, are thrilled when we can return the favor, especially for something so important as community health,” said Billick.

“It’s likely we are going to be one of the distribution points for some of the ultra cold Pfizer vaccines. We are one of four places in the Western Slope,” said Gunnison County public information officer Andrew Sandstrom. There are approximately 16 distribution sites throughout the state.

Reynolds said the freezers would be used to store the coronavirus vaccine in different county locations, “to allow us to have ultra cold storage in more than one site.” While Reynolds said she does not yet have any estimate on the number of doses we could expect to receive in Gunnison County, “My goal is to be prepared and have redundant storage options,” she said.

Reynolds said she expects to see the majority of vaccine distributions in the first quarter of 2021, and there would be a three-tiered vaccine list, with those most at risk at the front of the line, including health care workers and then those with preexisting health conditions.

According to Sandstrom this week, it is likely that Gunnison County will see an initial, minimal number of doses in mid-December. “The first phase will be to vaccinate healthcare providers. It is likely that the general public will not see vaccines until spring or summer. This is a quickly evolving situation and we will provide updates as we get them,” he stated.

Colorado is prepared to receive and distribute COVID-19 vaccine(s) as soon as one becomes available. The state has received $1 million from the federal government to use in pre-COVID-19 vaccination funding, and the state has also been notified it will receive an additional $2 million for the vaccination itself, according to Reynolds. She said Colorado public health officials anticipate distributing $1 million to public health-based organizations around the state based on populations within the jurisdictions.

Costs
Reynolds said that the vaccine itself will be provided at no cost to people but there is an expectation of billing insurance carriers for the administration fees involved. There is also a process for reimbursement for the individuals who are not insured, she said.

“That’s a significant administrative burden for our team to be able to do all of that billing, so we will be looking into that,” she said.

Reynolds has planned accordingly and included the cost of additional staffing and vaccine-related tasks in the county’s Public Health department 2021 budget. She said much of it would come from state-allocated CARES funding.

Sandstrom said it will be administered much like the flu vaccine is handled.

Test run complete
The CDC and Operation Warp Speed (OWS) chose Colorado to participate in a pilot run for COVID-19 vaccinate readiness testing in late November. The test run simulated the end-to-end logistics for the vaccine distribution, and the CDC conducted the test with external partners Pfizer, McKesson, UPS and FedEx and 10 jurisdictions.

“Participating in the end-to-end test is an opportunity to increase operational readiness as well as evaluate the state’s ability to coordinate, communicate and share information from a multi-agency, multi-jurisdictional, multi-disciplinary standpoint,” according to the press release from the CDC.

The Colorado State Joint Information Center declined to identify the locations used in the testing “for safety and privacy reasons.”

County COVID numbers
Meanwhile, there have been 235 positives recorded in Gunnison County since November 1, representing more than 44 percent of Gunnison County’s total positive cases throughout the pandemic. Many of those were discovered by contact tracing and were centered on the Western Colorado University campus.
Since the start of the pandemic at the end of last winter, there have been a total of 531 positive, 5,205 negative and 34 pending tests recorded in the county up to November 30.

“Our positivity rate has come down from where it was a couple weeks ago. So we are seeing a pretty good trend…but it’s still at a level that we need to be concerned and be vigilant,” said Sandstrom.
The positivity rate at press time was 8.39 percent, but the county public health preference is to keep the rate below 5 percent.

“We are seeing some positive trends, but we are still seeing positive tests every day. We continue to meet two indicators for a move to the Yellow level of Gunnison County’s Coronameter. We have had three or more days in a seven-day period with three or more positives per day. The second indicator regarding positivity of tests remains well over our 5 percent threshold but has come down from 16 percent,” Sandstrom said.

“The remaining indicators in the Coronameter are in regards to our ability to give care. While our local healthcare system continues to manage well, there has been an increase in hospitalizations at the state level,” noted Sandstrom.

“We’re not out of the woods yet. We’re doing a great job here locally, but we have to keep it up.”
Sandstrom also noted that vaccines will only begin to make improvements to the risk and will not mean a comprehensive, immediate eradication of the virus. “Just because we start getting doses doesn’t mean the risk will go away immediately.”