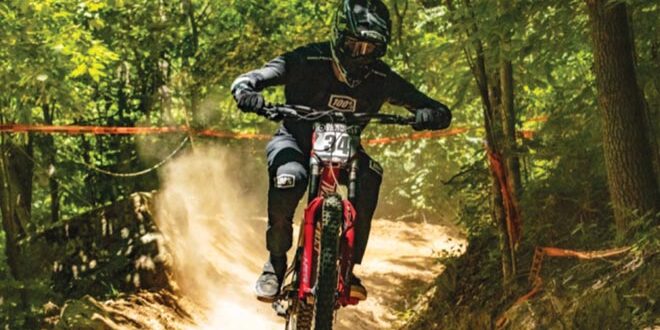 It was early summer of 2019 and Brooks Hudson was 15 years old and deep into the downhill mountain bike race circuit. Having been named to the Commencal Junior Cartel, one of the few fully supported junior race teams in the nation, Hudson was charging, racking up impressive results and was in Andorra in June training with the Commencal team to prepare for a race there before returning to the U.S. for the National Championships.

“The season was going really well,” says Hudson. “I was one of the top racers in the U.S. and favored to win U.S. Nationals.”

Then, during training, Hudson broke his leg, had to get it realigned and was on a plane back to the U.S. with his season over.

“I was just really bummed out,” says Hudson. “I was really looking forward to Nationals because they were at Winter Park and I’ve raced and trained there a lot. It’s kind of my ‘home track.’”

Hudson still decided to attend Nationals to support his Commencal teammates and it was there that things changed again, almost immediately. While the leg injury stopped his season in its tracks, a conversation at Nationals ignited his career.

“This guy comes up to me from USAC [USA Cycling] and says, ‘We know you’ve been doing big things on your bike. We want to help you get into the World Cup circuit and become a pro,’” explains Hudson. “After that I just started training harder because I knew I had a future.”

By October he was back on his bike and he continued to train on his bike, in the gym and on the snow, focusing a lot of his attention that winter on skiing and competing on the IFSA junior freeskiing circuit with the downhill bike racing season slated to start April 2020. Then COVID hit and the season was cancelled.

“That was the second Nationals I would miss in a row,” says Hudson. “It’s all part of being an athlete though. It happens.”

Hudson certainly made the most of the situation. With no official national race season happening, he and his teammates and friends decided to head to Tennessee from June to August, quarantine together in a house and continue to train and ride at Windrock Bike Park.

“We were all in it together, riding dirt bikes and bikes all summer long,” says Hudson. “No coaches, no adults, just working out together, training together and having fun. I think it was better training than staying here because I was able to experience humidity and intense heat. We were doing pump track intervals in 102 degree temperatures with 100 percent humidity.”

It turns out too that a lot of pro riders live in the area because of the bike park and Windrock hosted a series of bike races. With the bigger events in the U.S. cancelled, more riders started coming to Windrock to compete and Hudson hit a season highlight toward the end of his summer stint in Tennessee. With more top riders rolling into town, Hudson and his friends were lined up to race another event as part of the Southeast Downhill Series when they noticed numerous of the top riders in the nation also signed up.

“We didn’t expect it to be a big race until the day before when all of these guys started showing up,” says Hudson.

Hudson ended up winning the Cat I race, beating numerous second-year CAT I riders and flirting with a top five time when compared to the pro class times. It was a fitting end to a summer of hard work.

“That was the highlight of the season,” says Hudson. “I was riding really well and it all came together. It was a great way to wrap up all of the training I had done with a win. It felt really, really good.”

Hudson returned to Crested Butte to start his junior year and slip into a whirlwind of activity. Not only was Hudson in the midst of schoolwork, but also October and November is when the bike industry starts arranging their plans for the upcoming bike race season and when rankings are announced. In the end, Hudson is ranked third in the nation among CAT I junior expert riders ages 17-18 in just his first year in the category. He is also lined up for the UCI Junior World Cup circuit and following a race in Tennessee in early March, he will then hit the World Cup circuit. It starts with a race in Maribor, Slovenia in late March, four additional races throughout Europe and finishing with a sixth World Cup race in Snowshoe, West Virginia in September.

“A lot of the races are still up in the air because of COVID but I plan on doing all of them if they happen,” says Hudson. “I’m really excited to do it but super nervous as well.”

The ultimate goal for Hudson is to make the jump to the World Cup pro circuit but it depends on his results from the Junior Cat I races. Fortunately, he has both this race season and the 2022 season to make the cut and Hudson explains that a lot of the time, junior CAT I racers use the first year on the World Cup to get their European race legs and then make the jump following their second year of racing.

“The only way to qualify into the pro category is to race the Junior World Cup and most kids use the first year to get situated,” says Hudson.

Until then, Hudson will continue workouts in the gym, on his Peloton bike and on his skis. In addition, if some races happen to pop up in Arizona this winter, he will try to make those as well.

“I’ll just stay on top of my schoolwork and stay ready until the season starts,” says Hudson. “I’m really excited to race on different soil in a totally different country.”