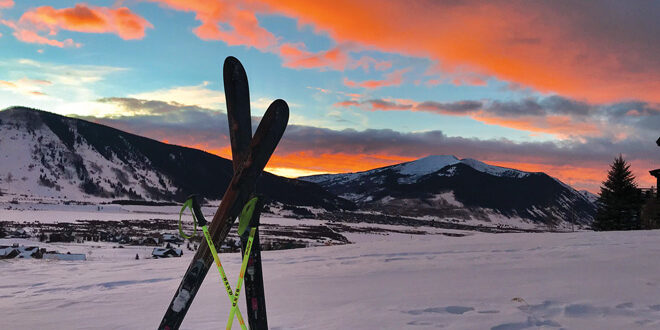 In ski town parlance, dust on crust was what we woke up to on Tuesday and Wednesday. It added a skiff of snow to what is by any measure a super lean ski season in terms of coverage. It’s been a weird winter. Heck, it’s been a weird couple of years. But walking the dog when the temperature was on the positive side of the thermometer, when the thin sheet of white covered two weeks of grit and poop, it was nice to feel a blanket of quiet that the dusting of snow provided. Crust is loud and annoying. Dust is at least the start of soft and comforting. Sort of like Donald and Joe.

As the nation moves to a new era after Wednesday’s inauguration of Joe and Kamala, one where the people in charge want to actually do the sometimes tedious work of governing instead of just crowing loudly and annoyingly about what they see in an alternative universe — we are getting some dust on the crust.

I don’t want to keep writing about D.C. (and I won’t much longer) but while we don’t always like to admit it, things happening in D.C. impact us here. Sure, we want to think we can stay above the national fray but we can’t. Whether it is coronavirus vaccine distribution; the policy of prioritizing extractive industries over all else, including community arrived compromises in the North Fork Valley; climate change ramifications that impact the ski industry; regulations that protect clean air and clean water; public land policy that impacts our literal backyard; racial justice issues; and myriad other issues that trickle down (or up) to 9,000 feet in the Rocky Mountains, we feel the effects of what happens in the Nation’s Capital. The transition from Donald to Joe is one of TV entertainment-type bluster to plodding, serious work. It is from flash to grind. From loyalty tests to civil service. Crust to dust.

Going really local, we can soon return our focus to the things that we can touch here.

—There is the effort to develop a tangible affordable housing plan throughout the valley. That is something that won’t ever be totally solved but having a roadmap can keep us on the right road to keep Crested Butte and the valley a place for all people no matter their economic situation. It feels like the movement is toward a variety of projects and partnerships and defining those is a good way to proceed.

—There is the latest school expansion proposal. A new plan was announced last week and as expected, there are certainly lots of questions to be answered. There is plenty of time to do it but before the school board even considers asking taxpayers to approve a $100 million bond issue, they need to get out the reasoning behind such a giant proposal. Does the district really have a $100 million need or is a bunch of that more a “want?” A year ago, the “cheap” alternative to expand the Crested Butte Community School was estimated to be about $30 million with the dream plan that involved a new campus site tallying about $60 million. At initial review, this plan seems like for $48 million CBCS is getting the cheap plan with a lot of polish. And with a bottom line result that could last just a few years based on enrollment projections, is it really the best long-term choice? Again, there is plenty of time to address the questions and I am confident the board and staff will be transparent about their thinking but this has a ways to go.

—The county, the ski area, and both the towns of Crested Butte and Mt. Crested Butte have climate mitigation at the top of their minds. Given the immediate and significant impacts climate change has on a ski resort, it is a good thing they are trying to take what little action they can to address the issue. While a few solar panels and requiring green building codes in second homes won’t change the world, (in fact, are second homes allowed in climate mitigation?) it is something tangible and sends a good message to all that come here.

There are of course plenty of other things to keep an eye on…local COVID protocols that seem to be working but won’t be foolproof until we get a lot more people vaccinated; backcountry crowding and how we can keep the thing that attracts people here, attractive; figuring out the best look for Elk Avenue in the summer; determining if we can do anything to improve the location and efficiency of the Post Office; and just keeping the valley a good, honest place to live and work.

Perhaps given the events of recent weeks, now is the time to settle in and regain our footing. We all should find our balance before diving back into the list of issues, both local and national.

It was good to see some snow this week. It is good to start to return to a sense of normal. Dust on crust is not the ultimate answer and those conditions can hide rocks and ice and so you need to be careful with it, but it’s better than nothing and a move in the right direction. In uncertain times, and this seems an uncertain time, a return to at least a sense of normalcy, a sense of moving in the right direction no matter how lackluster is a welcome move. This week’s skiff of snow provided hope. Wednesday’s change of leadership in the Oval Office provided hope.
We can all use some calm, quiet and comfort. And hope. It appears we are finally heading there.