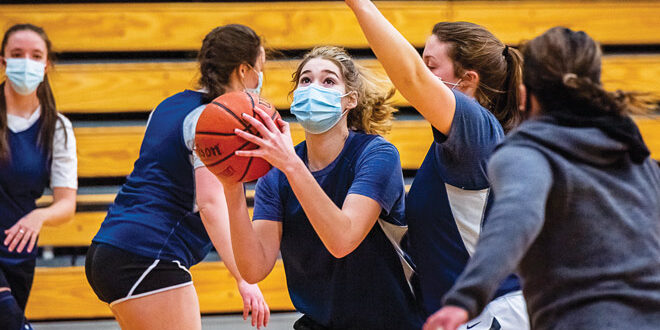 As the season approached last year, then coach Vaden Holmes and athletics director Jarrod Hinton had to take a serious look at the Crested Butte Titans girls basketball program. Playing in one of the toughest 2A leagues in the state with a young team low in numbers, the team had suffered numerous lopsided losses and wins were few and far between over the past several seasons.

As a result, Hinton and Holmes decided to move the girls basketball team last year to a JV schedule and the move had an immediate impact on the players psyche and the program’s health as they finished the year 9-9.

Holmes has since moved on from coaching the team but Amanda Reynolds stepped in to help continue the team’s progression this year along with assistants Katie MacFarlane, Shelby Kitt and Amanda’s husband Tyler.

Reynolds brings a wealth of experience to the program. Growing up in Kansas, her father was her first basketball coach at age 9 and she went on to become the starting point guard at Kansas State University. Once her kids started playing, she jumped into the coaching fray and spent the past couple of years in the background of both the Crested Butte boys and girls teams taking on the assistant coaching role with the boys team last year.

“It’s been really good getting to know both teams,” says Reynolds. “There’s a camaraderie between both teams and they really are just one unit.”
When the girls head coach position opened up, Reynolds’ name came up and after some thinking, she decided she would take over as head coach of the girls team.

“Because I had such a positive experience with the boys team, I thought this would be the right fit for me,” says Reynolds.
Then she started watching game film, further confirming that her decision was the right one.

“I looked at all of the film and what stuck out was how hard they worked and how gritty they were,” says Reynolds. “I can coach all the other areas of basketball but you can’t coach the intangibles. It’s hard to coach grit.”

Reynolds hit the ground running opening the gym to the players and motivating them to get in some off-season workouts as much as possible. Remarkably, her players answered the call and took full advantage of open gym time and workouts for the past three months.

“The entire team continued to show up religiously, even for morning strength training,” says Reynolds.

With so many players committed, the initial three months were used to get their feet underneath them so they could hit the court running once the season officially started on Monday, January 18.

“It was a nice opportunity to work on fundamentals in depth and use the time getting to know them,” says Reynolds.

Reynolds readily admits that a lot of the team dynamic and commitment comes from her six senior players. They’ve had a tough high school basketball career but their dedication has built resilience and their maturity has created chemistry.

“Our senior class is incredible in their leadership and they have a ton of heart,” says Reynolds. “Between their tough seasons to going through COVID, they’ve had some obstacles to overcome.”

Reynolds also has a lot to work with among the other nine players. Between the returning players and some who are new to the program and the game, Reynolds has seen a progression that coaches dream about.

“I’ve coached a lot of teams and seeing this team’s trajectory has been incredible,” says Reynolds. “I see things in them every practice I hadn’t seen before and that’s everything to a coach.”

They open the season at home when they host Telluride on Tuesday, January 26 at 5:30 p.m. Fans are not allowed in the gym but all games can be watched online at nfhsnetwork.com/subscribe/retail.

As for her team’s readiness for the opening game and their return to a varsity schedule, Reynolds is optimistic and excited.

“Absolutely, these student athletes are ready to play,” says Reynolds. “They’re going to be a team worth watching, they really are.”