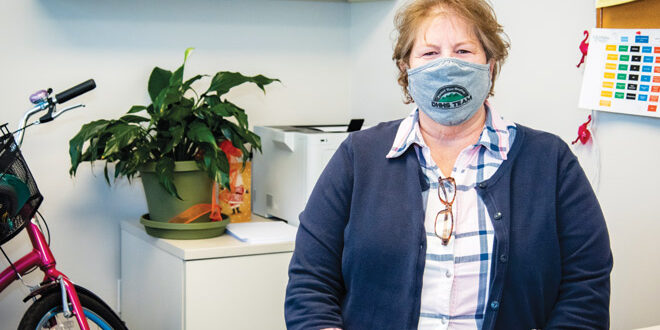 Editor’s Note: Joni is the Gunnison County Health and Human Services director and has led the local response to the coronavirus pandemic in the county. Under her guidance, the county has made its mark as one of the best places to be statistically, in not only Colorado, but in the country. For that, most of us are very grateful. Here is her personal story.
—Mark Reaman

Joni Reynolds grew up in the lush green of New England, just outside of Hartford, Connecticut, capital of insurance companies, where her dad was employed. She was one of four kids, and her mom was a homemaker until the children were older. What Joni remembers most is all the outdoor activities with friends, saying, “We had neighborhood games we would play together.” In the summer there would be swimming, kickball, softball and whiffle ball, along with Brownies and Girl Scouts and summer camps.

Joni’s academic interests were science and math throughout her years in school. She says, “I was never really talented in singing or music,” and she laughs that although she sang in the school choir, she never succeeded when it came to the tryouts. She graduated in 1978 and had her eye on physical therapy as a career.

“I think a turning point for me was when my older brother was in a motorcycle accident and sustained serious injuries. Watching him go through therapy impressed me, how they were able to work with him and help him with his recovery.” But it was a competitive and limited field that required trigonometry. “You needed to understand trig to do braces and orthotics,” she notes, and although she achieved excellent grades in all other math disciplines, trig was not one of those. So she switched her focus to nursing.

She enrolled in a nursing program at Springfield Technology Community College, and dropped out first semester. “It was an overwhelming city experience for this country girl,” Joni confesses. “It wasn’t the program, it was the city itself. It was my first real exposure to homelessness, individuals living in the street with alcohol and drugs. I felt both overwhelming sadness and confusion. I cried a lot.” So she returned home and worked for an insurance company doing data entry. When her dad was transferred to Denver, she followed her parents out there in 1979. “I actually transferred with the insurance company I was working for. I had never been out West, or beyond the East Coast.”

Joni had learned to ski as a kid. “Growing up, we water-skied. It was typical to ski behind boats in the summer and snowmobiles in the winter on the frozen river,” she says. When she got to Colorado, she headed to the Breckenridge slopes. “I was terrified. Just getting off the chairlift seemed challenging,” but she learned to enjoy it. In the summers, she explored different areas of Colorado, especially the mountains.

By the fall, she felt it was time to get back to school, signing up for a pre-nursing curriculum. She could only take a couple of classes at a time since she was working full-time to pay her tuition. “It’s usually a couple of years of full-time school before you get into nursing school and it was pretty competitive at that time,” she says. Nevertheless, she got into the University of Northern Colorado at Greeley in 1982.

In 1981, just before moving to Greeley for nursing school, Joni met Dennis Reynolds. “I didn’t want any distractions and he was a distraction but he was persistent, coming to Greeley to see me on weekends. Then he proposed on Valentine’s 1984,” she says, and the two tied the knot in May 1985. She graduated with a BSN in 1987.

In 1987, during her senior year of nursing school, Joni went to the Tri-County Public Health Department in Metro Denver, as a nursing student. Joni says, “And I knew that was it. We did clinics and home visits with families, children, young moms and dads, and teaching and support, educating new moms about breastfeeding, caring for their babies and their own health care. The prevention and the direct interaction with people in their homes was really powerful.”

After a year at St. Joseph’s, she went to work full-time as a permanent staff nurse with the Tri-County Public Health Department for three years until a colleague encouraged her to apply for the supervisor position at the El Paso County Health Department in Colorado Springs.

Joni had started grad school at CU in Denver when she took the new position, so she commuted for her Master of Science degree in Nursing (MSN) and graduated in 1992. Eight years later, Joni took a position with the State of Colorado Public Health and Environment. “I think it was the bigger picture, the ability to have an impact on a bigger scale. I wanted to be part of a larger influence.” She and Dennis moved to Monument on the edge of El Paso County, commuting to Denver daily for work for over 15 years.

With more than 15 years at the state, Joni felt she had gotten away from her passion—the connection between families and individuals. “I was doing a lot of policy work, legislature, government office and decision making. I was on the executive team as the public health director for the state for the last five years there but I was very far removed from what I loved,” she realized, although she had advanced in her career.

Joni and Dennis would escape to the Gunnison area to hunt, fish and camp. It was their go-to place, spending many days boating on Blue Mesa and Taylor reservoirs and camping, so when the position of director for Health and Human Services here became available, Joni applied. “I think people worried that I wouldn’t enjoy working in a small community compared to the state level,” where she was responsible for overseeing more than 800 people. “And it was very clear that some people wanted to see if you can cut a winter here in Gunnison,” she laughs. “In my interview, I asked one of the panelists what they thought I needed to be successful in my job here and Dr. Tarr, said, ‘You better get some warmer boots.’”

So she got herself a pair of sturdy warm boots and she was hired here in 2015. Her passion for work returned, plus she was able to do the broader connection of social service work like elder or child abuse and public assistance programs like food stamps and Medicaid.

It was the first weekend in March 2020 that the first COVID-19 cases hit. “We had met at the emergency operations center on the weekend with Scott Morrill, the county emergency manager, and C.J. Malcom, the EMS chief, to discuss what was happening. We met to develop a response plan for the county. We saw cases in the country but not in the county yet.” In their first meeting of all the different agency reps, from the hospital, doctors, county leadership, town councils, they got a text from the state of the first positive case in Gunnison County. “We then developed a unified incident command, which is an emergency response to build an organization—planning, operations and logistics, to organize the work, do the work and support the work. That’s standard for any emergency situation.”

They started testing in late March with dozens of positive cases daily. Several people had to be ventilated and flown out of the Gunnison hospital. “Across the nation and globe we were seeing health care systems overwhelmed. I didn’t want to see that happen here with our limited hospital facilities and health care. At the same time, we were seeing an increase of folks coming into the county, folks arriving from out of state to stay in their part-time residences. There was an increase of cases and an increase in the severity of the cases. Based on that, I issued a new public health order for people to leave the county if this was not their primary residence.” Joni received significant backlash, as some had been here when the first cases started and felt that travel would be unsafe.

“I modified that health order to say you could remain in the county if you were already here. I wanted to do what was safest for the people and community. There were significant risks in traveling so I didn’t want that,” she says. Despite the modification to the original order, a lawsuit was filed and the Texas attorney general threatened the county on behalf of his citizens who still wanted to come to their second homes. Joni stood her ground, a difficult decision but one she felt was best for everyone with the limited resources and medical facilities. “I still focused on what was best for the whole county to reduce risks. Eventually, I issued a long-standing PHO, a county Coronameter that would monitor our county-wide risk and adjust restrictions or activities in the community.”

Happily, Gunnison County began administering the new COVID vaccines on December 16, with 1,624 to date and those numbers rising every Wednesday and Thursday during the clinics. “I think our vaccine efforts have been exquisite and organized with tremendous support from the Gunnison Valley Health and the community volunteers,” Joni says of the 40-member staff it takes to run each clinic. “My hope would be that we’re all vaccinated by summer, but my dream is to have it done by spring if we could get the vaccine.”

Joni and her husband have no plans to ever leave the Gunnison Valley. “I feel more attached and connected to my county because of this [COVID] experience and the opportunity to talk and work with so many people from different ends of our county, with the different perspectives. I understood the fear and the stress that people were processing, we all had it throughout 2020, and that helped me to understand some of the reactions that surfaced. It also helped me to gain new empathy for those various perspectives. I’ve spent my career in public health so I have that public health lens that I look through but others helped me to look through their lenses. If nothing else, we know that warm weather will come and we’ll be able to get back outdoors and enjoy our wilderness. I’m ready for the big ice melt on Blue Mesa. This spring will be more hopeful.”