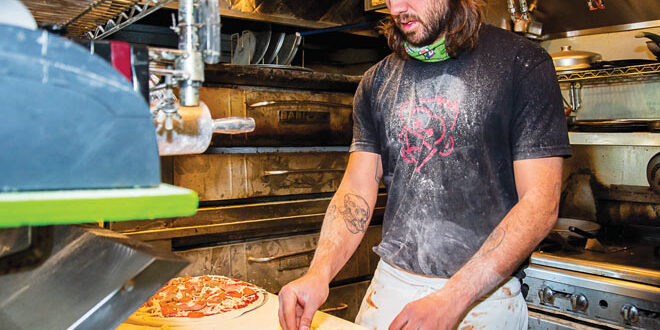 You don’t meet a lot of people born in Key West, who then up and move from Florida to Crested Butte. However, Matisse Baugh went from island life to land-locked, end-of-the-road CB when he was 8 years old, when his mom moved them behind the Ore Bucket building.

Growing up in Key West, Matisse remembers the hurricanes. “It was crazy waking up in the middle of the night and standing in six inches of water,” he recalls. They moved to Fort Walton Beach, Florida, when he was 6. He became an avid skateboarder, going to the rollerblading rink and was basically a beach rat enjoying the saltwater lifestyle.

Matisse felt the move to Crested Butte was a good thing. ”My time in CB was pretty awesome. Growing up, I had no curfew, and I was skateboarding sunup to sundown. The Big Mine park was the first skate park I really got into.”

In the winters, he was allowed to snowboard every single day. “When I was in fourth grade, my mom homeschooled me so I could get up on the mountain every day.”

He stayed a Crested Butte child until 2004 at age 12, when he went to visit his dad in Savannah, Georgia. Savannah is right on the coast so when he got the opportunity to return to beach life, he took it. “It was way different than Crested Butte. I liked the lifestyle for sure, the beach and skateboarding,” he says.

His school experience was new and unfamiliar. “I had never really seen any fights before and my first day in school I saw like four fights,” Matisse laughs. “It was a big culture shock. They really like to fight there.”

He occupied his time skateboarding through the winter, as well as surfing in the winter too, despite the chilliness of the water. “That’s when the good swells come in. I’m not a big surfer really but it was something to do outside. I was very much outdoor-oriented.” Matisse graduated high school in 2011 with not a clue as to what direction he wanted to head off to in life.

“I like to visit Georgia, but I don’t like to be there for very long. It’s a beautiful state for sure, there are 13 barrier islands, all uninhabited, with no way to get to them other than boat and that’s my favorite part. My dad had a Boston Whaler and a sailboat. We went to the islands often and camped. There’s a marine science research center on one of the islands and my dad had a friend who worked there so we camped there often.”

After graduation he narrowed it down to two destinations for home. “I thought I was going to move back to either Key West or Crested Butte,” he says. The decision was made to return to Crested Butte when an apartment became available and since he already had friends here and he was, as he puts it, “Ready to give up on Georgia,” he moved in autumn of 2012. “Coming over Cottonwood for first time since 2004, I saw a moose. There was a little bit of snow on the peaks and then topping the pass, seeing the Taylor Reservoir, I felt I was home and I thought, I’m never leaving this place.”

Once entrenched back into the CB lifestyle, which took less than a week, Matisse was at the skate park and walked over to Mikey’s to see if they needed help. “I’ve been working at Mikey’s ever since. I started as delivery but within a couple of weeks, I was working in-house, answering phones, taking orders and soon after, I was making pizzas.”

For a couple of summers, he did some raft guiding in Buena Vista, “My first roommate at Three Seasons was a raft guide and it intrigued me. I still own a raft but don’t guide or do it commercially.” On slow rafting weekends, Matisse would return home to twirl pizzas.

Like many locals, Matisse has indulged in off-season adventures, heading to Baja for some beach time. Last year, he decided to explore the Philippines, traveling throughout the country. “They have really good fried chicken but the rest of the food, not so good really. The beaches are really cool and very rocky because it’s all volcanic. The water’s really warm and the waves are pretty good for surfing. Everyone’s very nice there. My favorite was an island called Siquijor. It was very small so you could take a moped and drive the whole thing in an hour. There were a lot of hidden beaches, so you’d have to hike to them. I brought back a lot of cool shells. I saw crazy orange and blue sea urchins.”

Then COVID-19 hit. The country began closing everything down, domestic flights were being cancelled and he had booked the very last ferry to leave. “Luckily enough, the head chef at the hotel I was staying at said if I got stuck there, they’d give me a job as a cook or whatever they needed.” It was during the time on the island that a friend had contacted Matisse to tell him of Mikey Larson’s passing. “I wanted to get home fast because I didn’t know how Mary, Mikey’s wife, was doing.” Also, Matisse was the only other person at the time who knew the pizza dough recipe. “I did a FaceTime with one of the employees so they could could get the restaurant back open.”

Fortunately, he got on that last ferry and returned to Cebu City, staying at a hostel so he could catch the 1,500-mile flight to Manilla and then into Denver. “I missed all my flights and went through 10 different bookings trying to get a flight out, but they were all getting cancelled.” Then Cebu went into full lockdown with a 10 p.m. curfew and shoot-on-sight orders. It would be another week before he could successfully get a flight out on March 20.

Returning to Gunnison, Matisse went into immediate quarantine. “I wasn’t actually supposed to be returning to Gunnison at all. I had taken a job on a fishing boat in Alaska. I was pretty excited about it. They make decent money. My plan was to work all summer and travel all over in winter and then do it again.” But Mikey’s didn’t have a lot of employees and Matisse wanted to be there for Mary.

Matisse came up with the concept of partnering with another longtime Mikey’s employee, Collin Vossen, to buy the pizza business and the two moved forward on it last July 13, 2020. “I love it. I feel like it’s a great opportunity especially with how much CB is growing. During the summer we get a lot of the skateboarders,” he says, because they’re directly across from the skate park, “and in the winter there’s the sledding hill. They come and get slices and ask for hot cocoa, but we don’t have that,” he grins that it could be in their future.

“I live in the apartment that’s attached to Mikey’s. I don’t even have to go outside to get to work. It’s somewhat too attached to work,” he laughs, and adds decidedly, “In the future, I definitely want to move somewhere else but for right now I need to be here for when they need me. I take it one day at a time. It’s still really busy. We do a lot of delivery in the winter. This summer, despite COVID, was the busiest it’s ever been. People couldn’t get into restaurants with 50-percent capacity, so they ordered take-out pizza.”

As far as travel and fishing boats go, Matisse feels, “The beach isn’t going anywhere, and I can just go in the spring and fall because we close the first 10 days after ski season and first 10 days in November so those would be my travel times. I want to go to Africa next, but I don’t have anything planned right now. Crested Butte is my home. I have a lot of really good friends here. This is my family.”