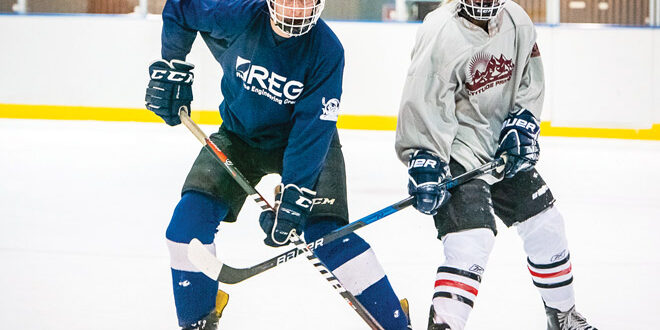 “Crested Butte, it may not snow but at least it’s cold”

Amidst all of the craziness in the world, town league hockey offers a hug-yourself (you know, cuz of COVID) calming warm feel-good sensation. Monday night was especially huggy as local high school alumni Izzie Dethloff, Leila Nichols, Eric Berglund, Joe Coburn and Dylan Curtiss were all on the ice, father/son duo of Dylan and Steve Curtiss played together and a guy was playing his 74th game of this season and has played over 180 games of hockey last year.

I’ve always thought, or maybe someone told me (Matt Nilson perhaps), that the Stanley Cup is the hardest professional sports championship to win. Not only do teams play an 82-game regular season, but also the post season consists of a qualifying round composed of best-of-five series and then all other rounds (first round, second round, conference finals and Stanley Cup finals) are best-of-seven series. Amidst all of that is a lot, and I mean A LOT, of hitting.

In our local leagues (granted non-hitting leagues) Devon Carrillo’s commitment is otherworldly and deserves the Local Amateur Sports Ironman Award (LASIA). Last fall and winter he played in more than 180 hockey games between Gunnison fall league, as well as Gunnison and Crested Butte winters leagues. On Monday night he reached 74 games when he stood between the pipes to help pace REG to a 7-2 win over Altitude Painting.

REG took control of the game from the opening face off firing the first shots only to be turned away by Altitude goalie Eric DiMarco. DiMarco’s initial magic eventually faltered though under the continuous barrage as Dylan fired a wrist shot from the blue line past him. A minute later, Dylan threaded a pass into Coburn in the high slot and Coburn spun to flick a backhand past DiMarco for a 2-0 REG lead.

Altitude Painting started tightening things up in front of their net and rode the shoulders of a Jack Seiver breakout who then skated the length of the ice to stuff a quick shot top shelf glove side on Carrillo.

The glimmer of light for Altitude was almost immediately dimmed 20 seconds later when Coburn then slipped a pass to Rewk Patten and Patten stuffed it home but Seiver lit the lamp once again as he cycled onside and then skated back into the REG zone to pick up the puck and score again while the entire REG team stood there and watched.

That renewed purpose for Altitude was stymied once again though in quick fashion as just 15 seconds later REG responded when Jake Laramie found Dylan open weak side with a pinpoint pass and Dylan poked it past DiMarco for a 4-2 REG lead heading into the second period.

Both Cody Scott and Alex Banas looked to rekindle the Altitude fire with numerous solo efforts but they were quickly turned away by the REG team defense. REG continued to pepper the Altitude net but DiMarco had seen enough shots to find his mojo and started standing on his head in net to deny the onslaught.

REG eventually found some light in the ninth minute of the second period thanks to good old-fashioned smash mouth hockey. DiMarco made a number of saves to hold off the attack but REG continued to send more players into the slot swatting and leaving DiMarco sprawling for saves until a final poke from Mike Grosinger finally beat DiMarco. Once the horn sounded at the end of the second period statisticians had DiMarco down for 24 saves in the second period alone yet Altitude still trailed 5-2 with one more period to play.

Down but not out, Altitude returned to the ice for one more period of play but once Dylan decided to go solo and score his third goal of the game midway through the third the game was over. Coburn put the finishing touches in the final two minutes to net his second goal of the game to seal the 7-2 win for REG.