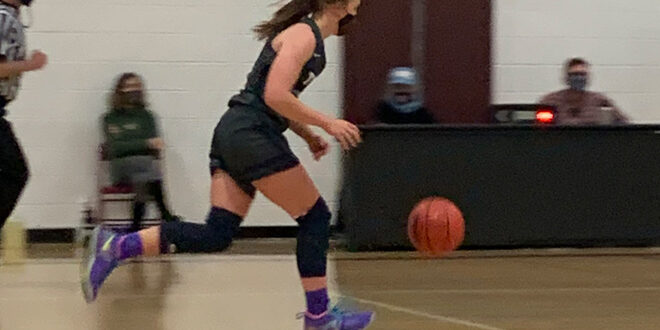 There’s something different about the Crested Butte Titans girls basketball team this year and you could see it in the opening possession of the game. Their new look continued on from that opening possession through all four quarters as the Titans took down the Telluride Miners 49-34 in the season opener Tuesday, January 26.

The two teams traded baskets in the opening minutes of the game with Colleen Harris scoring four points for the Titans. Sophia Truex then drained a three-pointer and two free throws to build a small cushion and Crested Butte then switched to a press to keep Telluride off balance. While the press had mixed results at first, the Titans held onto a three-point lead at the end of the first quarter.

“I had a feeling at the start it was going to take us a minute to really get in the groove,” says coach Amanda Reynolds. “They had never run that press before. I drew it up on the white board yesterday and we played it today.”

The Miners opened the second quarter scoring inside the paint but then Blakeley Reynolds and Harris combined for Crested Butte’s next eight points in a row to push Crested Butte ahead 17-8 forcing Telluride to call a timeout.

Telluride managed to stay within striking distance with their effort rebounding and scoring off second chances but Harris knocked down four free throws and tacked on another bucket and Reynolds sliced through from the wing to score to build a 26-16 Crested Butte lead going into halftime.

“I was happy with the fact that they’re competitors and that even though it wasn’t clicking early, I knew it would eventually,” says Reynolds.

The Miners came out of halftime rejuvenated and started to chip away at the Titan lead. The Miners pulled to within six points midway through the third as Crested Butte was noticeably struggling and picking up fouls trying to hold off the Miner attack.

The Titans’ press then started to wear Telluride down at the start of the fourth quarter forcing a couple of Miner turnovers resulting in four quick points for Crested Butte. Telluride struggled to crack the seal on the Titan team defense and with Mara Pennie crashing the boards and Harris and Reynolds scoring, Crested Butte pulled ahead 42-29 with four minutes left in the game.

Hayes Freeman then provided the crushing blows for Crested Butte. After grabbing an offensive rebound and scoring, she stole the ball on the next Miner possession to score again to help build a 17-point Titan lead and forcing the Miners to call another timeout.

“She just doesn’t quit and she seems to come on always at the right time,” says Reynolds.
The timeout proved fruitless as Crested Butte’s press and defense continued to handcuff the Miners while the Titans tacked on additional points down the stretch capped by a basket from Reynolds at the buzzer for the 49-34 win. Reynolds led the Titans with 22 points followed by Harris with 15 and the Titans shot 81-percent from the free throw line.

“They hit it hard in the second half and that’s the type of ball they play,” says Reynolds. “They did a ton of things really well and some things not so well. I was really happy with our guard play but we’re not getting the ball into the post enough so we will work on that a ton. We need the inside outside game.”