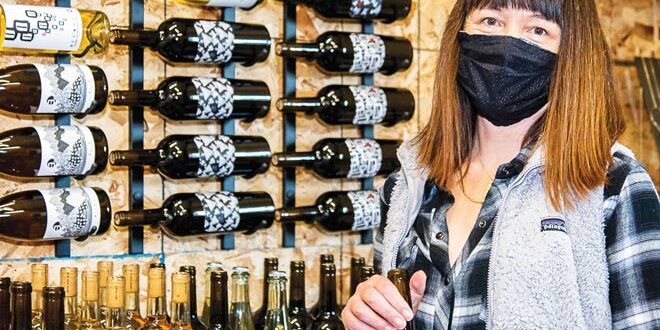 Although Shamai Mushen Buckel is the big sister in her family, Shamai actually means “little sister” in Chinese. Her mother arrived from China at four years old, while her father grew up all over the world. Shamai was raised in Gardner, Colo., on the east side of the Sangre de Cristo range in the San Luis Valley. Her mom is a medical doctor and dad was a ski patroller at Cuchara Resort, outside of La Veta.

As a kid, she’d hike over Mosca Pass to the Great Sand Dunes with other kids and families and for school outings. In the winter, she skied three days a week since her school had Fridays off, and on other days, the family would Nordic ski. When summer rolled around, they’d grab innertubes and float down the Huerfano River, which, Shamai says, was her favorite thing to do. During her childhood, she recalls that Gardner was home to several large hippie communes, so there were lots of kids to play with. “We’d go to different commune gatherings and parties,” she says.

There wasn’t much of an economy in Gardner, and though her parents had separated, they both moved to Santa Fe. Shamai was 10 when she arrived in her new home in New Mexico. She skied both Santa Fe and Taos. School, Shamai recalls, was just school. “I was a good student, mostly in AP classes.” In her junior year, she had the opportunity to visit China for two weeks, tagging along with her brother’s track team. “I had a great time. It was a fun adventure to be with 50 other kids in a foreign country and going to track meets.”

Shamai’s senior year brought even more opportunity to hit the slopes. “I went to school at 7 a.m. and was done before lunch and so I skied every day.” Senior year is also when she got her first mountain bike. “I started climbing too. I was into the outdoors, so those were the other activities that were out there to do. But skiing was my passion for sure.”

It was during her senior year that Shamai first discovered Crested Butte, when her mom brought her out to ski. “I was super lucky on that trip because it snowed a foot and a half every night.” She found her way up to the High Lift and got lost in the powder on the North Face. “I got to the back bowls. I thought it was just incredible.”

She graduated in 1993 with a plan. “I just wanted to ski,” she laughs. “I wasn’t wanting to work at the ski area. I grew up running amok on the mountain since my dad worked there. It was like our home away from home.”

During the summer after graduation, she took time to travel, adventuring off to Australia, Fiji and New Zealand. “We bought a car in Australia, a ‘75 Toyota Crown and drove it around for a month, camping on beaches,” she says of her three-month journey. Later that autumn, she and friends took a trip down to Costa Rica. “We checked out volcano Arenal, which was erupting at the time. We camped at the base and it was erupting all night. I didn’t think it was dangerous—however, they didn’t have a lot of rules back then. It was real fumy, but you could see the red lava glowing. It’s cool to see it in the day but at night it’s stunningly beautiful.”

Returning to Santa Fe, Shamai enrolled at Santa Fe Community College with no clear path. “I still just wanted to ski all the time. I loved being outdoors so I was still biking, climbing and hanging out with high school friends. We were just enjoying life.” College didn’t hold her interest, so after one semester she left to work the 1994-95 ski season at the Ski Santa Fe Resort in the rental shop, which, of course, came with a pass and ensured daily skiing.

“My brother had gone to school in Missoula, but didn’t like it,” so Shamai convinced him to move to Crested Butte with her in the fall of 1995, thinking they might both attend Western State College sometime. She started working at The Bakery but took a tumble on Twister. “I ended up breaking my leg before Christmas.” Living with her brother and another guy, she thought, “These dudes aren’t going to take care of me,” so she went home to heal in Santa Fe. “It sucked but I recovered and as soon as I could, I started working at two high-end restaurants in Santa Fe, one for lunch and the other for dinner. I just saved money because I knew I had to get back to Crested Butte.” She returned that next winter for the 1996-97 season.

Working at Butte & Co., in the rental and hard goods, Shamai felt that she was “living the life.” She enrolled at Mountain Heart Massage School, “because it seemed like it was a good idea. I’ve always been interested in wellness on multiple levels.” Hers was the first graduating class at the then-new school and with that under her belt, she enrolled at WSC in their health promotion and wellness program, graduating in 2000 with a bachelor of arts degree. “I just wanted to keep learning. I’m a life-long learner and I’ll probably figure out something else to go to school for,” she laughs. “I’m a seeker of information. I was still doing some massage work and still working at Butte & Co. because I wanted all the gear.”

Her mother wanted to take Shamai and her brother to the Great Wall in China, so in 2003 the family trio left for Beijing. “It’s been well maintained and it’s stunning… but it failed,” she said of the wall’s ancient history as a border defense. “We went to other small villages along the Great Wall where the wall was more like a mound of dirt because winds had blown dirt through the centuries. In some places, they had taken the bricks to build homes.”

In 2000, Shamai began dating Joe Buckel. “Joe was a snowmobile guide and king of Crested Butte softball,” she recalls. They married in 2006 and now have two children—their son, Cy, is 13 and their daughter, Kalyn, is 10, and both are enrolled at Crested Butte Community Shool.

“When we were dating, Joe wanted to learn to make wine. It was a hobby at that point.” Joe had gone to different wine regions around the world, doing biking tours while Shamai took care of his dogs. In 2005, Joe asked her to move to California with him so he could learn to make wine. “I had always lived in the southwest and I had always wanted to check out California. We moved to Sonoma County and Joe took winemaking classes at Napa College.”

Shamai put her massage degree to use, working at very high-end spas in Napa. “It was definitely a lot of fun, it paid well and I worked in beautiful places,” she says of the five years they were there while Joe earned his wine making certificate from UC Davis. They moved to Cortez, Colo., when Joe was hired by Sutcliffe Vineyards as winemaker. “It was a transition for sure. We had the coast, amazing food, we went to San Francisco a lot to see friends and go to concerts and ballgames. Cortez had none of that. Our son was a year-and-a-half then. I was lucky enough to be a stay at home mom,” which allowed her time to help start a Montessori charter school.

“The best thing about Cortez is the mountain biking. It was my favorite part. Also, for nine years, we owned a small 10-acre farm with apple orchards. We started thinking about starting our own wine label in 2015. We thought about planting vineyards but we didn’t have the best spot for it. In 2017, we actually got all the licensing and named it Buckel Family Wine.”

By that fall, they had moved back to Crested Butte with both kids in tow. “We had a pretty good idea of how things worked and what we wanted to do with our wine label. When you live in the Four Corners you’re closer to Phoenix, Albuquerque and Salt Lake—Denver’s really far away. When you’re selling alcohol, you sell direct to consumer and wholesale in the state and if your major market is all these out-of-state places, you have to get other licensing. So being centrally located in the state would allow us to take advantage of more regions’ markets within the state,” she surmised, even though Crested Butte is at the end of the road. “Here’s the thing—in the summer, you can drive over Kebler and Cottonwood to get to those markets. We’re pretty lucky.”
Buckel Family Wine gets their grapes from the Western Slope of Colorado, mainly Palisade, but also sources grapes from Hotchkiss and Cortez. “We actually started selling in January 2018. You can buy our wines at all the liquor stores locally in Gunnison and Crested Butte. We have a tasting room in Gunnison, which is also our production space where we make the wines. We make white, rosé, red and a petnat, which is the oldest style of making a sparkling wine and predates Champagne.”

Shamai feels they’ve found their perfect home here. “The friends and community that we have here and the access to the outdoors, the ability to play outside—I don’t see myself leaving any time in the near future.”

The Buckel Family Wines tasting room is at 1018 Highway 135 in Gunnison. Reach them online at buckelfamilywines.com.