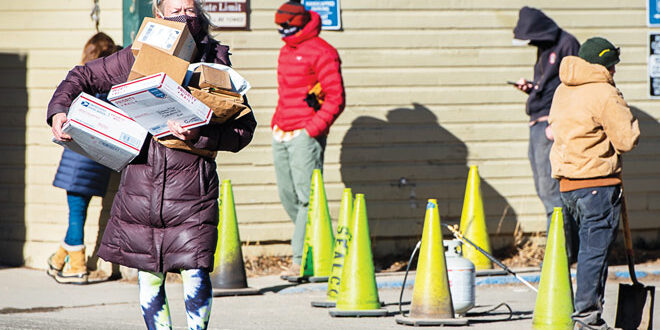 Time to move it?

While understanding that the individuals who work at the local Crested Butte post office are doing the best job possible under increasingly difficult circumstances, the Crested Butte Town Council is frustrated and wants to address several P.O. concerns ranging from its mid-town location to its efficiency during busy times like the holidays. The council plans to reach out to elected officials including U.S. senator Michael Bennet to see if any mitigation can be accomplished since local and regional efforts to communicate with post office officials have not been heeded. They also plan to contact the owner of the post office building to see if perhaps an alternative to that location is possible.

Town manager Dara MacDonald informed the council that post office frustration is not uncommon in ski towns similar to Crested Butte. She said that practices vary in different areas and in places like Breckenridge or Frisco for example, residents do not have to pay for a small post office box like they do here. “We have been told that is not an option for Crested Butte,” she reported at the January 19 Town Council meeting.

“The whole post office situation here has been a long-standing frustration,” MacDonald admitted. “Whether it is not having home delivery, paying for a P.O. box, the time it takes to pick up a package during the holidays, or the busyness it encourages given its location, along with the fact so many people living between Crested Butte South and Mt. Crested Butte have a box there, the post office is on a lot of people’s radars. It is exacerbated with things like online sales from Amazon since many times those packages are delivered to the post office.”

Council member Mallika Magner has several times expressed frustration with the local post office. “It showed a complete lack of concern for our community when they didn’t even try to go after the free air filtration systems the county was offering as a result of the COVID pandemic,” Magner said. “The lines at the post office are not just during December. They now start in September. It is a quality of life issue for people living in town. We used to have much more responsive people in charge but recently the responses have been lackadaisical. I’d really like to not take ‘no’ for an answer when it comes to our concerns. It is worth putting the effort into.”

Magner said she has heard many comments from local citizens in favor of moving the location from the middle of Elk Avenue because it contributes to “congestion and traffic.”

“I agree,” added council member Laura Mitchell. “We deliver mail to people living in Crested Butte South and Riverbend and Skyland as well as people living in town. Why is that our responsibility?”

MacDonald said it was her understanding the current post office building lease expires this April.

Council member Chris Haver said the issue was one that should be brought up with the county and Mt. Crested Butte as well. “We should also reach out to FedEx and UPS and talk about what they are doing to our community by delivering packages to the post office,” he said.

“Can we talk to the owner of the building and figure some of out-of-the-box ideas?” asked Magner. “Let’s try to come up with some creative thoughts.”

“Ideally the post office would be at the Four-way Stop and the Chamber of Commerce would be downtown,” suggested Mitchell. “Maybe that’s something to work out.”

“We should prioritize this as an issue that needs to be solved,” emphasized Magner.

“We need to keep on it,” agreed council member Will Dujardin. “I’m glad we are contacting our elected representatives like Senator Bennet.”

MacDonald made it clear that it was not the people working in the local post office who were the problem. “They are working very hard and doing the best they can with what they have,” she said. “But the town is not getting answers or even responses from the regional people.”

“The people working in the P.O. are members of our community as well,” said Magner. “This isn’t a criticism of them.”

Mayor Jim Schmidt hoped that under the Biden administration, the post office officials would be more responsive.

MacDonald said she would try to track down the owner of the post office building to have a conversation before the April lease deadline. She also said she would coordinate with senator Michael Bennet’s office to talk about the issue and continue trying to communicate with regional postal officials.