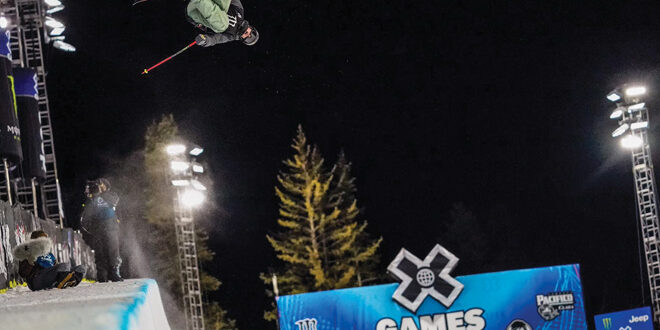 “I was just so grateful to be out there, where I was and doing what I was doing”

As the reigning World Cup halfpipe skiing champion and the first athlete, skier or snowboarder, to ever land a switch dub cork 1440, Aaron Blunck was poised to keep his momentum going into the 2021 season.

“Things were looking good, I was feeling good and ready for the season,” says Blunck.
Then on October 13 Blunck’s halfpipe ski season looked to be over when he crashed during a training run at a U.S. Ski Team camp in Saas-Fee, Switzerland.

“I had landed the switch dub cork 1440 once but was over there trying to perfect it,” says Blunck.
In one of those attempts to perfect it, Blunck crashed into the edge of the halfpipe and crumpled to the bottom with a lacerated kidney, broken pelvis, six broken ribs, a bruised heart and a bruised lung. And, for all intents and purposes, it was the end of his 2021 season.

“It was, without a doubt, the worst crash of my life,” says Blunck. “I was told that with the kidney injury, most people are bedridden for six months.”

Remarkably, after just four months, Blunck stepped up on the X Games podium in Aspen on Friday, January 30 to receive the silver medal.

His initial intention following the crash in Switzerland was to simply get back on skis by March and focus his efforts on a complete recovery for the long term.

“I just had this motivation that I had to come back from this,” explains Blunck. “Not necessarily to compete but to get back so I can have a life when I am older.”

Two months later the doctor monitoring his kidney injury cleared him to ski. He followed that up with a check-up from Dr. Griggs in Crested Butte and Griggs gave him the framework to return to action starting with visualizing the first step of getting into the gym and then going from there. One thing led to another and Blunck was back on his skis on Christmas Day.

“That was the greatest Christmas present I could have asked for,” says Blunck.

He then decided the comeback was on and committed to getting in shape and getting back into the halfpipe. Still, it wasn’t until a U.S. Ski Team camp at Copper Mountain a week before the X Games that he knew for sure.

“I thought that if I don’t feel good at the camp, I can’t do X Games,” says Blunck. “I didn’t want to take a spot from some kid that had been training hard for the past eight months. But I got to Copper and I started feeling good.”

The decision was made and Blunck was set to compete in the X Games. Yet, expectations and goals remained somewhat muted for an athlete that would typically be headed to Aspen with X Games gold on his mind.

“I felt I could probably put myself into that competitive mindset again,” says Blunck.
The X Games started as a cathartic experience for Blunck as he took the time to appreciate exactly what was going on around him.

“I was just so grateful to be out there, where I was and doing what I was doing,” says Blunck.
He landed the first two of his four runs and remained cognizant of the significance of the moment.

“I didn’t care what the result was, I was just so happy to land my first and second run,” says Blunck.

He admits he was a little over-zealous on his third run but when he slipped into the start for his fourth and final run, a friend said, “you got this, you’re back.”

Blunck carried that energy into the halfpipe and finished off the same run that won him the Grand Prix at Mammoth Mountain last year to push into second place where he remained to take home the silver medal.

“I just felt so with it at that moment skiing and I couldn’t believe what I had just done,” says Blunck. “To come back from my worst injury ever to being back where I left off.”

Unfortunately for Blunck, while he is near 100-percent, the halfpipe competition season and the 2022 Winter Olympic Games qualifiers remain in the air.

“Right now, everything is either postponed or cancelled,” says Blunck. “We just have to sit and wait and see what the rest of the year looks like.”

In the meantime, bags and skis are packed and Blunck is bound for Taos, New Mexico this week.
“I’m going storm chasing,” says Blunck.

Share
Previous Profile: Susan Kerns
Next Parking in CB isn’t a problem…managing it is