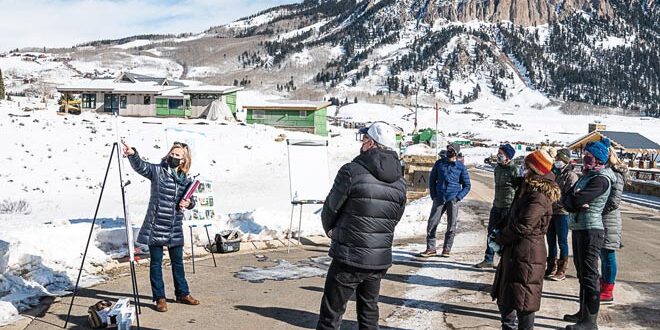 Possible to be ready this summer

With the hope of obtaining Great Outdoors Colorado (GOCO) funds along with a Gunnison County Met Rec District grant to help pay for the project, the Town of Crested Butte is moving toward constructing a new boat launch site at the Slate River annexation this summer. Council discussed the idea at a January 19 work session and ultimately landed on the most expensive but most popular option after hearing from the public. They approved up to $210,000 in funding for the project, with or without grant assistance, at the February 1 council meeting.

Given the coronavirus situation, Crested Butte Parks and Recreation director Janna Hansen explained that the state had established a grant program to help with “community resilience.” She felt the boat launch project would fit perfectly into the requirements of resource conservation, outdoor stewardship and community vitality.

She said one of the main goals with providing a boat launch off of Pyramid Avenue in the newly annexed development would be to take some pressure off the Rec Path Bridge site that is heavily used and located in the Paradise Park neighborhood. The new launch area is only .16 of an acre and would include a beach area, stone steps down a steep hillside to the Slate River, a boat slide, trash and recycling receptacles, interpretive signage, bike racks, paddleboard racks and boulder seating. A temporary porta potty would also be located at the boat launch site with a permanent restroom to be built in conjunction with development of the parcel located on the southwest corner of Eighth Street and Pyramid Avenue. The original concept included other amenities like an air compressor and water bottle filling station but those have been eliminated.

Landscape architect Margaret Loperfido of Sprout Studio explained that the allocated site was not very big but with some dirt work it could accommodate everything that was needed. She said citizens that have contributed to public comment mentioned concerns such as volume of use, potential traffic flow and noise concerns.

She said education of users was a priority and aside from signage it might be good to duplicate efforts such as those used by the Crested Butte Land Trust at certain local river put-ins. “Explaining the situation and river etiquette directly to users would be a good thing to do,” she told the council.

According to Hansen, the Crested Butte Land Trust has committed to providing a “River Steward” at the boat launch to provide educational monitoring from May 15 – August 16 depending upon river flows.

Councilwoman Laura Mitchell said having a changing area included in the plans was important, even if the changing area was screened through some jogged fencing. “The neighbors in Paradise Park don’t like seeing hiney all the time and that will happen here too,” she said. The revised plan included such screened changing areas.

Town manager Dara MacDonald said eventually the permanent restrooms planned for the site would be used both summer and winter (for the sledding hill) and be large enough to provide a place for people to change clothes. She said she was counting on Hansen “to work her grant magic” to help pay for things like the needed water and sewer lines.

Of three design alternatives presented to the town council, Hansen said she preferred the most updated design concept that expanded the beachfront along the river and the staging area on the top of the parcel. “That design certainly requires the most dirt work and even a retaining wall,” she explained. “But it is the most practical in the long run. It incorporates things we heard from the public. The council will have to choose a preferred option in February before we apply for the grant.”

Councilman Chris Haver said that preferred option would be attractive for people and would ease some pressure in the Paradise Park neighborhood.

Local fisherman and boater Ben Furimsky said signage should be very visible and probably located near the steps leading to the river. He said putting in an air compressor was likely a waste of money. “It’s a great idea but I doubt it would last long. Every air compressor I’ve ever seen at places like this are all broken,” he said. “I also have a concern about the bridge clearance during high water times which is when this will see a lot of use.”

“On a huge year, you might have to close the boat launch,” agreed Mitchell.

Council agreed on Monday to move forward with Hansen’s preferred alternative design. Hansen will apply for the grants immediately with the expectation to hear back from the state by March and the Met Rec board by May. Work will begin this spring as soon as weather permits.