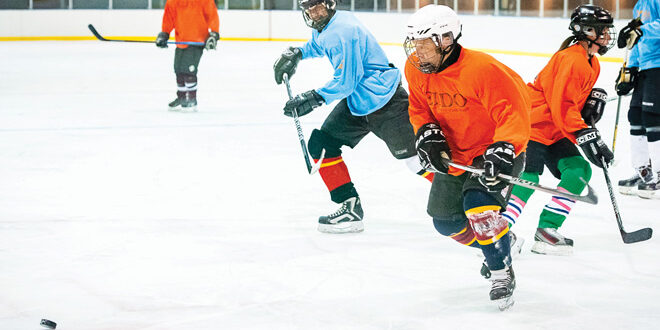 “They shoulda called you the dork.”

We had a game, a tight one too, until we didn’t as Clark’s Market scored five unanswered goals in the second period to take down the Eldo 7-3 in town league hockey action Monday night.

The Eldo threw the first punch early in the first period when Justin Blair skated in off the blue line and directly to net but Clark’s goalie Devon Carrillo stuffed the first chance and the second chance as well to prove denial ain’t just a river in Egypt.

But the blue line presence of both Blair and Ryan Carroll kept twisting the screws on Clark’s yet Clark’s held them off as they started to find their mojo through neutral ice.

The slight shift in momentum for Clark’s provided the first goal of the game as Hunter Grosvenor skated to net looking to pick the corner. Hunter Donleavey made the initial save, and a couple subsequent ones, until Shai Ovadia found the back of the net.

“Anyone touches my stuff… and I kill you.”

The Eldo answered back a couple of minutes later on a powerplay despite Carrillo’s work between the pipes as the constant Eldo attack with a man advantage resulted in a goal from CJ Hoover bringing cheers from the Eldo fans pressed against the glass.

Once back to full strength, Clark’s Market responded almost immediately as Grosvenor took a pass up the ice from Jack Weise to score in the final 10 seconds of the period for a 2-1 lead.

Donleavey did what he could in net to try and hold off the series of relentless attacks but once a seam was found, Clark’s Market started feasting like hippies on “reduced for quick sale” items.

Ovadia started the assault blasting a merciless slaphot from the faceoff circle past Donleavey. Ovadia then took the ensuing faceoff straight to net again and while Donleavey made the first stop again, Grosvenor followed to score on the rebound. Thirty seconds later Grosvenor struck again. Twenty seconds later Anthony Viera tipped a shot by Connor Sample past Donleavey. Thomas McLean then put the finishing touches on the five-goal barrage as he barreled to goal to score putting Clark’s Market up 7-1 with one period to go.

Still, if Clark’s Market can score five goals in a period, why can’t the Eldo? Well, they couldn’t. Donleavey did continue his heroics in net for the Eldo though actually losing his stick during one flurry only to continue to stack the pads, toss the blocker and whatever else he could do to keep Clark’s from scoring an eighth goal.
Brandon Muller eventually found some room to score twice for the Eldo in the final minutes of the third period for one last round of cheers from the Eldo crowd before the final horn signaling the end of the 7-3 crushing.