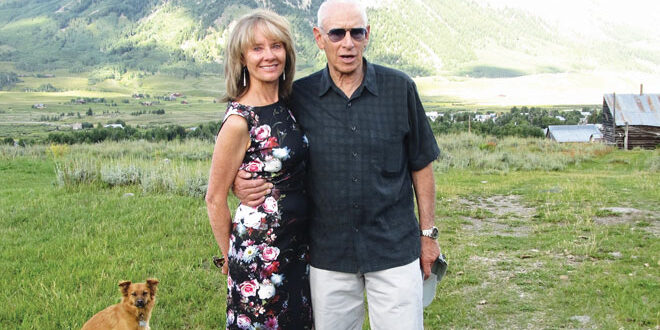 As a child, David Leinsdorf was fascinated with airplanes, cars, boats and trains, mostly because his father, Erich Leinsdorf, the renowned Grammy award-winning conductor, always traveled for his work in those modes, so David took an early interest in transportation. “I had a model plane with a U-control,” he says of the serious toy airplane with lines attached to an operator controlled handle. “You’d fly it around in circles until you were dizzy. They had a gas-powered engine, and you didn’t want to get your finger in the propeller because it would break your finger.” David’s interest in cars led the then 10-year-old to sneak off with the family vehicle and drive it up and down the driveway, which later progressed to slinking off with the auto for a cruise around the neighborhood at night when he was 12, “When nobody could see how old I was,” he grins, and adds that his parents never knew.

Raised in Larchmont, New York, a suburb of the city, David attended public schools. Despite his father’s talent and fame, David claims, “I played piano badly and briefly. I never had any talent, but my brother was a good violinist. He had more musical talent than I had but we both gave it up. My father pushed us way too hard. He wanted us to learn music because he felt it was important, but to make a career of it, you had to have a lot of talent and motivation and I lacked both. My mother was a music lover but not a musician.”

David laughs that his interest in high school was primarily girls, but he also skied quite a bit, mostly in Vermont at Stowe and Mad River resorts. “When I started driving legally,” he says, “I’d get in the car with friends and go skiing.” Before he turned 16, he’d buy the weekend tour ski trips offered by New York City ski shops that included transportation, ski pass and lessons at Catskill resorts like Belleayre and Hunter mountains.

David confesses that he wasn’t a terribly motivated high school student. He graduated in 1960, with no idea of what he wanted to do. He enrolled at Columbia College in Manhattan. “I was into jazz and NYC had wonderful jazz. The best job I ever had was after my freshman year in college. I was a waiter at the Jazz Gallery on St. Marks Place. I worked from 8 p.m. to 4 a.m. That year, the summer of 1961, the Thelonious Monk quartet played for an entire month.” He also recalls seeing legendary jazz greats such as Art Blakey and the Jazz Messengers, Cannonball Adderley and John Coltrane.

In other summers he traveled, visiting his father who was working in Europe. David tells the story of his father’s emigration from his homeland in Austria. “He emigrated in the late 1930s from Vienna when he couldn’t get work in Hitler’s Europe because he was Jewish. He was born into very modest circumstances, no assets or any real reason to stay in Europe, so he emigrated to the U.S. at the age of 24.” His father had warned his mother and aunt to leave, but the challenge of not speaking English dissuaded them. “In 1938, the Nazis came into the Jewish neighborhood, rounded up the women, took them up to the fancy neighborhood and made them scrub the cobblestone streets on their hands and knees at gunpoint. “Erich was right. We should leave,” David’s grandmother told her sister. They left Vienna and moved to New York. David’s dad went to work as an assistant conductor at New York’s Metropolitan Opera, where he made his debut conducting Richard Wagner’s Die Walkure a few weeks before his 26th birthday. “His life’s work was always music,” says David.

“I really fumbled around as to what I wanted to do in college. I only decided on law when I struggled with physics. Pre-law was not a passion, it was by default,” he says, but he also realized that studying law would give him more options, “You could go into government, or to a law firm or go into business,” not to mention the number of different fields of law. David’s parents also encouraged political discussion at their family dinner table, which heavily influenced him. He received his political science bachelor’s degree in 1964 and entered Columbia Law School.

“Girls, jazz and skiing, those were my interests but you don’t have much time in law school to do much but study and for the first time in my life, I buckled down and became a serious student,” he says. Graduating in 1967, David recalls, “I was worried about the draft,” as the Vietnam War was raging, but mumps meningitis at 13 had left him deaf in his left ear which disqualified him from service. After taking the New York bar exam, David worked for the U.S. Department of Justice in the Antitrust Division. He enjoyed the work but after two and a half years, Ralph Nader hired him to research and co-author a book about Citibank. “A very boring book,” David says. “Burned out from working 24/7 on that project and smoking two packs of cigarettes a day, I was a mess.” In June, 1971, he headed west to Telluride to visit some friends, and never returned to live in New York.

He moved to Crested Butte because Telluride didn’t have a ski area in ‘71 and David just wanted to ski. He had first discovered CB during one of the first Arts Fair weekends. “Give Me Shelter was playing at the Princess Theatre and I thought, this town is all right. There were 250 people living here. I liked Telluride better because I think it makes the rest of Colorado look like the flatlands but again, it didn’t have skiing.”
He packed up in NYC, moved to CB on Labor Day weekend 1971 and went to work doing construction. “I tied the rebar in the San Moritz condos foundation and it’s a miracle that it hasn’t slid down the hill,” he laughs. “I bought my first house at 223 Sopris for $16,000 in the autumn of ‘71.” The following year, he opened the first law office in Crested Butte. “At first I operated out of my home and Mary Yelenick, who owned the liquor store with her husband Frank, answered my phone when I couldn’t pick up.” Later, David moved into the Bullion King building above the Alpineer.

Back then, there wasn’t much law work so David continued in the construction trade for another year until becoming involved with politics. Hired as the town attorney, he resigned his position to run for Gunnison county commissioner. “I got involved in politics when Bill Crank ran for mayor in 1972. I worked on his campaign and he was elected. When there was an open seat on the county board, I went to Bill and said, ‘you ought to run for county commissioner.’ He said he was not interested, so I let him know that I would run if he wasn’t interested. Bill didn’t think I could win but I knocked on every door in the county. I stood in front of the post office, Safeway, City Market. I did a lot of campaigning. I ran against two opponents, Dick Eflin and John Rohde, and I ended up winning with 53 percent of the vote.”

David met Sandy Allen in 1976, a local ranch girl who grew up at Jack’s Cabin. Her great-grandfather homesteaded the family’s Allen Lane Ranch that’s still in operation under Sandy’s cousin Curtis Allen. “She was my insurance agent at the Verzuh agency working for Ron Coffey.” Although they didn’t start dating until 1982, Sandy worked on David’s 1978 county commissioner election campaign. “I won in ‘74, ‘78, ‘82 and ‘86. Rikki Santarelli ousted me from a fifth term in the 1990 election. As Myles Rademan told me, ‘In politics your friends come and go but your enemies accumulate.’” David and Sandy tied the knot in 1983. Their son Joseph was born in ‘85, followed by daughter Abigail in ‘88. “It was a very romantic proposal,” David says with a smile. “I said, ‘Sandy, our ski passes are no good this weekend, wanna go get married?’ She said ‘OK.’ We got in my plane and flew to Las Vegas. There was one paid witness at the We’ve Only Just Begun Wedding Chapel.” David learned to fly in 1973 in Crested Butte. “Ron Rouse taught me. He was the owner of Crested Butte Air Service, which ran commercial flights out of CB airport to Aspen and Denver.”
After his long service as commissioner, David turned his focus to his law practice, which then thrived. “And I became involved in school matters. In 1994, Joe Fitzpatrick and I spearheaded a ballot measure to split CB out of the Gunnison RE1J school district because we wanted a high school and the school board would not give us one. They said we didn’t have enough high school-aged students. So Joe and I worked together to put a measure on the ballot to separate the upper valley from the lower valley school district. We lost the battle but won the war—we lost the election because Gunnison didn’t want to lose the CB tax base but they agreed that we could have our own high school.”

David later went on to chair the school’s accountability committee, after Sandy had resigned, and served as chairman for several years, “One of the best accomplishments of that committee was hiring Stephanie Niemi as principal, who is largely responsible for making CBCS one of the premiere public schools in Colorado.”
These days find David taking three- and four-day weekends with his wife, frequently heading off to their Santa Fe casita. “But the reality is,” he smiles, “Sandy’s roots in this valley are so deep that if I wanted to leave, which I don’t, I’d have to leave alone. We do a lot of hiking and one of the nice things about Santa Fe is you can hike year-round. Regarding retirement, I cannot retire because the high point of Sandy’s day is 7:30 in the morning when I leave for the office,” he grins.