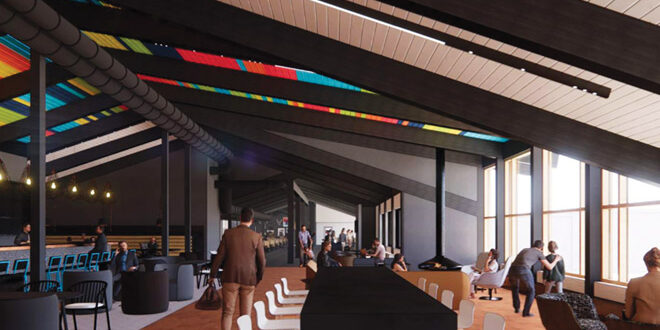 Breaking ground in late March and ready next December

As the last of the spring break crowds depart the valley and the ski season comes to a close, major renovations at the Gunnison-Crested Butte Regional Airport (GUC) are set to begin on the heels of departing flights. And believe it or not, the plan is for the new and improved airport to fully reopen from its summer construction slowdown as ski season starts up again next winter. The $22 million project to update and improve security, mechanical systems and user experience could be complete in less than nine months.

Adam Ambro with Gensler, an architect and design firm, presented the final airport design plan to Gunnison County commissioners on Tuesday, February 9, reviewing what Gensler has worked on for the past 18 months. The project’s main objectives have not changed since the county initiated the project with a much smaller budget in mind; the project became fully funded through a surprise $18 million grant from CARES Act funding in April 2020 and another $8 million in federal Airport Improvement Program money in September. The budgeting windfalls mean the full scale of desired renovations are now possible, and the project will be debt-free.

“We’re checking all these boxes and more,” said Ambro of how those original goals are addressed in the new design. There are now upgrades such as an elevator, escalators, interior design elements customized to reflect the Gunnison Valley’s location and culture, and pocket gardens and social gathering areas throughout the site. The overall effect, said Ambro, will be to create a more intuitive building for visitors with modern airport amenities while maintaining the modest character of the Gunnison Valley and its original airport design.

The existing building will be tightened up for better energy efficiency, with added insulation and geothermal technology. “The end result is that the building uses no natural gas whatsoever,” said Ambro, “It will be at, or very close to, Net Zero.” The lack of natural gas did result in scratching a large fireplace hearth from the plans that was originally to be centered in the upstairs lounge area. Rooflines will be opened to accommodate large windows, some of the downstairs footprint will be expanded, and a small new building to house the ground service equipment will be added to the site.

The parking lot will have a solar array installed as covered parking, producing additional energy in partnership with Western Colorado University, the city of Gunnison and the county.

Several aspects of the design plans incorporate local art, using large display walls for murals. Finish materials and color schemes pay tribute to the communities and landscapes found within Gunnison County, from sagebrush to aspen forests to talus fields to rivers and snow. The second floor uses brightly colored panels on the ceiling to match the vibrant palette of hues found along Elk Avenue’s creative and historic district. A topographic map of the area surrounding Blue Mesa Reservoir and GPS coordinates are placed on a prominent wall. The West Elk mountains are used for a subtle top on the airport entrance sign, modeled after the National Forest signs found so plentifully throughout the valley.

“We’ve had some really good fortune to end up where we are today,” said Ambro of the process that has allowed so much innovation and incorporated all aspects of the project in one single phase.

Gunnison County sustainability coordinator John Cattles, who has worked extensively with the design firm and the airport throughout the process, said he was thankful the plans have been able to continue throughout the pandemic. He also cautioned that the renovation process would be disruptive to the airport’s operations for the coming months, with many spaces closed off, limited areas open for travelers and temporary wall structures in place at times.

“The airport is going to operate in a very different way,” said Cattles of this coming spring and summer. “It’s going to be impactful…but we are capitalizing on having this open and ready for next ski season, opening on the second week of December if all goes well,” he said. He estimated the airport renovations would be 90-percent finished by that time.

The next steps are to finalize a maximum price guarantee contract with Shaw Construction, the contractor handling the project, and then apply for needed permits.

“One challenge we’re having is getting local contractors,” said Cattles. He said contractors have been busy with a lot of other, smaller projects, and he is hoping that if contractors have to be brought in from out of town, they can at least come from the Front Range to avoid Little Blue Canyon closures to the west.