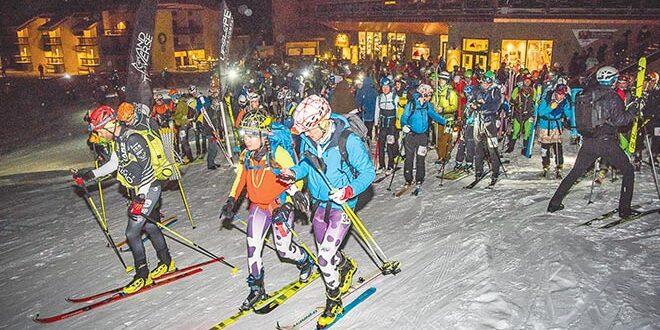 Into the night at midnight on Saturday, March 27

Ever since the cancellation of the Grand Traverse last year, Crested Butte Nordic remained diligent in their efforts to pull off the rest of their events scheduled for the summer of 2020 and into the winter of 2020/2021. Now, it seems like they will have successfully pulled off all of them as the green light is on for the 2021 Grand Traverse presented by Dynafit and Crested Butte Nordic Saturday, March 27 at midnight.

“I’m an eternal optimist,” says CB Nordic events director Andrew Arell. “I’m not surprised but it was definitely questionable. It’s gratifying that we will be able to provide a race to Aspen. Barring any major weather, we’ll go through.”

As of Monday, March 15, 200 teams were slated for the start of the race, a start that will be somewhat tweaked given COVID protocols.

There will be three 10-minute start waves with the first one actually heading up Warming House Hill from the base of Crested Butte Mountain Resort at 11:50 p.m. The second window for teams then opens at midnight with the third start window opening up at 12:10 a.m. While there are no official seeded start times, accommodations will be made for the perennial heavy hitters.

“We’ll send off the fastest teams in the front,” says Arell.

As for the “fastest teams,” no dark horse teams appear to have appeared but the usual slate of podium finishers are signed up with one team in particular gunning for the course record of six hours, 37 minutes and 38 seconds set by John Gaston and Max Taam in 2017.

“Cam Smith is teaming up with John Gaston this year looking to set a new course record,” says Arell.

As for the course itself, it will follow the usual route from Crested Butte to Aspen topping out at Star Pass and then again at Taylor Pass before the crushing slog along Richmond Ridge and finishing in Aspen.
“There’s really no standard course as changes sometimes happen as the race gets closer but there’s nothing out of the ordinary,” says Arell.

“People better have their heads screwed on coming down Aspen Mountain and banging a hard left to get to the finish line at the base of 1A,” cautions Arell.

As for the pre-race pomp and circumstance, everything will be virtual. Crested Butte Nordic teamed up with Cripple Creek Backcountry to produce some pre-race videos regarding various aspects of the race including the mandatory gear list.

“We’ve got some video tutorials trying to clarify any ambiguities in the gear list,” says Arell.

Arell warns all teams that since there is no in-person gear check prior to the race, Crested Butte Nordic will have people in place to ensure parity among the teams after the fact.

“We will have enhanced gear checks at the finish line,” says Arell.

In addition, the racer meeting will also be virtual with Crested Butte Nordic scheduling a Zoom meeting for Saturday, March 27 at 2 p.m. to give teams the final go or no go directive.

That call, ultimately, will be up to the snow safety team led by Megan Paden. Paden got a helicopter flight over the course two weeks ago. She and her team will head into the field on Tuesday, March 23 and spend the week in the mountains monitoring the snowpack and the weather.

“Course and conditions updates will be on our social media feeds throughout the week,” says Arell.
The 23rd edition of the Grand Traverse presented by Dynafit and Crested Butte Nordic will then wrap up Sunday, March 28 at 7 p.m. with the virtual awards ceremony on Facebook Live.

“Tune in as we honor and recognize these valiant participants,” says Arell.

Any and all information regarding the Grand Traverse race can be found at thegrandtraverse.org.