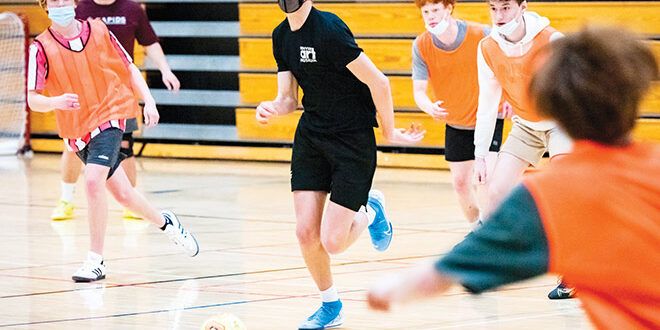 “They’re plenty capable of rising to the challenge”

With high school sports schedules thrown into a bit of disarray, the boys high school soccer season, typically played in the fall, was moved to spring and the Crested Butte Titans soccer team opened workouts on Monday, March 8.

While the high school fall season was cancelled, the high school players did manage to get in a club soccer season through the West Elk Soccer club during the fall of 2020 to continue training and development efforts that may pay off this spring.

“It definitely helped us out,” says senior Nathan Miller. “We’re still rusty but I can’t imagine how rusty we’d be without that club season. We’re definitely not in as good of shape as we usually are when we have two weeks of two-a-days, but series of sprints are getting us into shape quick.”

The climate of the Gunnison Valley can make finding grass to train on difficult in the spring, a reality the girls high school program deals with every year. Yet, thanks to the diligent work of Paul Morgan in Gunnison throughout the winter, fields in Gunnison have shed their snow making it possible for the Titans to get three workouts a week on grass and then two evenings each week in the gyms.

“Without the efforts of Paul Morgan and his crew, we wouldn’t be able to touch an outdoor field which is vital to training for outdoor soccer,” says coach Bob Piccaro.

The Titans have 30 players out this year led by a small senior class of Miller, Alex Eldridge and Gabi Marmolejo. The junior class is not much bigger so a lot rides on the large sophomore class, many of whom will be thrown into the varsity mix from day one.

“The sophomore class has some great talent and the hope is they can step up,” says Miller.

“We’re talented and tough and this group of 10th graders have been playing competitive soccer a long time,” says Piccaro. “They’re plenty capable of rising to the challenge.”

And, just like all high school sports this year, the soccer season will be fast and furious. After a week of training, the Titans jump into the fire immediately as they open with games against 3A powerhouse Salida, 2A state champions Ridgway and Colorado Rocky Mountain School (CRMS) in Carbondale in a span of five days.

“Salida will be a nice wake up call, Ridgway will be a phenomenal game and we hope to get some revenge on CRMS from our fall season games,” says Miller.

With just 10 games total allowed, that’s a third of their season in one week. From there they continue league battles until April 17 with the first round of the post season slated to start on April 21.

The Titans first home game will be at the Gunnison High School field against Ridgway on Thursday, March 18 at 4:30 p.m. Please respect COVID protocols, wear masks and remain socially distanced.