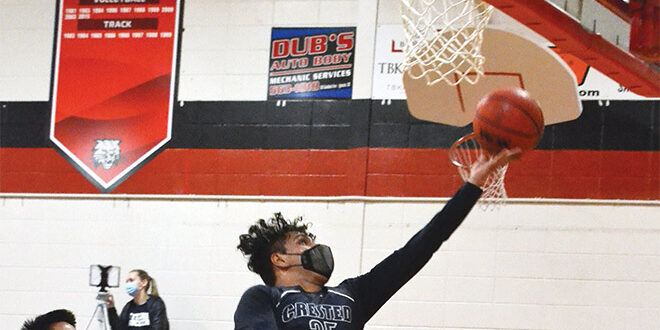 Boys basketball falls in first round of state

“At least we got to play and experience a season”

The Crested Butte Titans closed the regular season on a roll winning the last three games including a double overtime win to get the 23rd spot out of 24 available in the state tournament. Unfortunately, their late season surge stopped in the first round of the post season falling to the 10th seeded Ignacio Bobcats on Tuesday, March 9, but not without a fight.

The post season was a question mark for Crested Butte that final week and when they got the news, the Titans were ready for the next step to their season.

“I was a little nervous whether we were going to even make it or not,” says coach Brandin Hamilton. “We were dropped to the 23rd seed which just means you’re going to play a quality team for sure in the first round but I don’t think the guys were worried. They still had the mentality that they could beat anyone.”

Ignacio would prove a worthy first round opponent, as they are one of the top 10 teams in the state each year and had a strong returning group of three seniors to build their team around this year.

“Their three seniors have been the core of their program since they were sophomores,” says Hamilton.
Crested Butte struggled through the first quarter as they soon found that while Ignacio was always solid from the perimeter, they were lights out to open the game. Meanwhile, the Titans struggled to score on offense and were down 13-4 at the end of the first quarter.

“We were executing the way we wanted to and getting good looks but shots weren’t falling,” says Hamilton. “Ignacio was on fire.”

The next two quarters the two teams played fairly even basketball but Crested Butte just could not cut into the Bobcat’s lead they built in that first quarter.

“We went to a man-to-man defense and the boys did a nice job and we’d try to make a run but then they would hit a big shot,” says Hamilton. “They had five guys that were hitting the three and the three ball helped them keep their lead.”

Erik Wasinger opened the fourth quarter with a three-pointer from way downtown and when the Titans made a stop on defense and scored four more points, they finally had cracked the seal and cut Ignacio’s lead down to nine points. But the Bobcats came up with points when needed and were up 52-41 with 52 seconds left and seemingly in the driver’s seat to finish it off.

Yet, the Titans kept plugging away and the game started to unravel for Ignacio.

“I never saw in their faces that they thought the game was over,” says Hamilton.

Wasinger stepped to line to hit two of three free throws, Alan Prieto grabbed the rebound to then score two more. Prieto followed with a three-pointer on their next possession and Crested Butte kept fouling Ignacio to stop the clock. While Wasinger hit a three pointer in the end, Ignacio had hit enough free throws that it was too little, too late as Crested Butte fell 54-51.

“They just kept battling and felt like they always had a chance,” says Hamilton. “We got the chances for sure, we just ran out of time.”

While it was an early exit for the Titans from the post season, Hamilton keeps things in perspective recalling the rash of injuries and short quarantine stretch during the COVID-shortened season.

“At least we got to play and experience a season,” says Hamilton. “It just seemed like we always had some challenge ahead of us all the way to the end.”