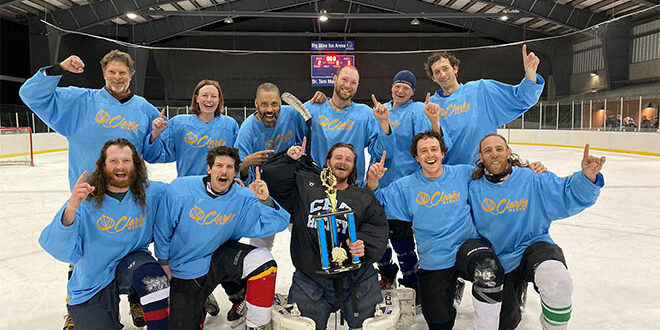 Town league hockey provided us some normalcy this winter and the season came to a climactic close Friday, March 12 when Clark’s Market took down Kochevar’s 3-2 to win the 2021 Crested Butte Town League title.
Fans were filing down Belleview, Third Street, Second Street and the adjacent alleys to the big game and it was, by far, the largest crowd ever at any town league hockey game in the 20-plus years I’ve been covering it. The glass was completely lined with beer swilling fans, two to three deep in a lot of places. Even the local police force was there. Mostly as fans but, maybe also in case there was another “incident” as the playoffs ramped up in fervor all week long.

On Monday night some consternation over a goal being waved off, among other things, led to a game misconduct, which led to the ejection of a player. But that was small potatoes compared to what allegedly transpired in the playoff game Wednesday night as reports are that Lacy’s won 10-8 but not before the fan base 75 strong were whipped into such a frenzy that fans were climbing the glass resulting in the attention of our local police. If there’s ever been a time when I “should have been there,” that was it. But, I wasn’t.

Though I was there for the finals Friday night and what a game it was.

The pace from the first drop of the puck was befitting of a showdown between the top two teams in the league as Clark’s finished the regular season ranked first and Kochevar’s second.

Kochevar’s wasted little time in flexing first when Sam Reaman opened the scoring 22 seconds into the game to put Kochevar’s up 1-0. But that would be one of a scant few opportunities all period for Kochevar’s as Clark’s defense was not only solid in one-on-one situations, but also as a team covering for each other and packing it tight in front of their own net remaining diligent about protecting their house.

Kochevar’s defense was equally stout early on and while the quick goal hinted at the start of a Kochevar’s blow-out, defense and battles in the neutral zone soon dictated play.

Hunter Grosvenor maintained his breakneck pace for Clark’s looking to equalize with a solo effort up the boards only to have his shot bang off the post and Kochevar’s held on 1-0 by the end of the first.

A Kochevar’s penalty had Clark’s in a powerplay in the opening minute of the second period but their power shift could not find any seams and their push eventually backfired. Kochevar’s packed it in to kill off the penalty and when they looked to ice the puck, Clark’s let their guard down and Sam Evans skated up ice to catch the goalie playing the puck and stripped it off him for the wraparound short-handed goal and a 2-0 Kochevar’s lead.

Clark’s remained composed though and on the powerplay and after struggling to pick the lock, Grosvenor skated around the net and out between the face off circles to fire a shot. Connor Sample had set up in the slot and tipped the puck but Eric DiMarco made the initial save. Sample stayed with the play to then knock in the rebound and get Clark’s on the scoreboard.

Twenty seconds later, Clark’s Market scored again as Grosvenor fed Shai Ovadia in the slot for a goal tying the game 2-2. Defensemen still made the difference for both teams with Ashley Brown and Jack Weise forming a formidable and well-coordinated duo for Clark’s with Thomas Mclean equally adept at poke checks to stop skaters before they could get started.

Meanwhile, Oliver Houseman proved to be the stand out defenseman for Kochevar’s allowing whoever he shared the ice with on the back line opportunities to cheat forward.

Eventually, the insane pace of the first period and the start of the second period would take its toll on both teams as legs grew weary and the pace of the game eased back and the two teams headed into the third period notched in a 2-2 tie setting the stage for the chance at some late game heroics.

Question was, who would it be? Would Reaman or Evans thread their way the length of the ice to score and win the game? Would Isaac Long, the elder ombudsman of Kochevar’s, show the young guns composure under pressure? Or, would the dynamic duo of Ovadia and Grosvenor, Ovadosvenor, combine in the clutch situation? OR, would we get a random stealing the show?

Whatever the outcome, it really would come down to who had more gas in the tank as legs and lungs were noticeably cooked on both sides.

Defensemen for both teams came up with numerous miraculous poke checks to hold off solo efforts from the all-stars.

Clark’s called a timeout with 90 seconds left in regulation and the break offered enough reprieve for Grosvenor. After spending a good portion of the third period relatively quiet, he found his step for one last surge taking a pass from Mclean to score with 43 seconds left in the game.

Kochevar’s called a timeout immediately for their last ditch effort and when Reaman won the ensuing face off, Evans scooped up the puck and headed straight to goal. Yet Donleavey made the read, stopped the shot and Clark’s Market completed the transformation from 2020 cellar dweller to 2021 champions.