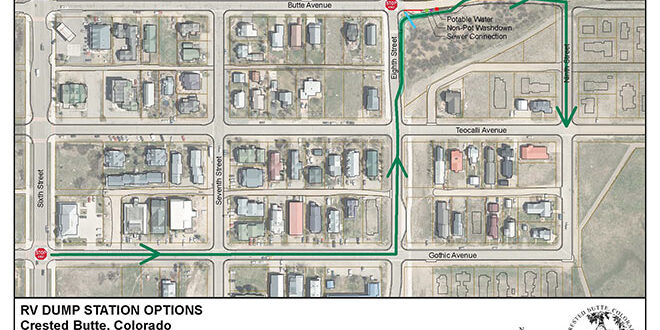 Five alternatives to be considered

The Crested Butte town council will begin on Monday to address the contentious issue of whether and how to allow Recreational Vehicles (RVs) to get rid of their waste after spending time in the nearby backcountry. Currently an RV Dump Station is located next to the town sewer plant on Butte Avenue between Eighth and Ninth Streets. But the neighborhood has filled in over recent years and the negative impacts on the growing neighborhood have compounded.

The Crested Butte planning department held a couple of neighborhood meetings about the issue in early March and the discussion at times turned contentious. Some neighbors have been very vocal about the RVs driving in and lining up in the neighborhood to dump their waste before heading down valley. They have cited safety, speeding, confrontation and congestion concerns.

Town planner Mel Yemma and community development director Troy Russ admit the neighborhood impacts need mitigating and at the April 5 town council meeting they will present several alternatives. In a memo to council, they write that, “Town Staff proposes consideration of five different alternatives to improve the RV dump station in the Town to mitigate the impacts on the neighborhood prior to the 2021 summer season. In the longer-term, the Town would continue to proactively work with our regional partners to develop solutions on backcountry waste and consideration of bringing additional stations online… The location next to the wastewater treatment plant is required due to RV septage being thick and often anerobic, which requires high flows and proximity to the plant’s headworks intake location…”

Staff has formulated five potential mitigation alternatives for the RV Dump Station. All the alternatives include things like limiting hours of operations and charging a formal fee. Currently honor-system donations are accepted. Signage and wayfinding information would be improved to ensure drivers find the proper route to the station. More monitoring of the site would also be implemented.

As for the potential alternatives:
• Town would designate a queue lane in the town’s right-of-way on Eighth Street between Teocalli and Butte with a turnaround at the dump station for smaller RVs.

• A queue lane would be opened on Butte Avenue between Eighth and Ninth Streets. This would reverse the current flow of traffic.

• A queue lane would be opened on Eighth Street between Butte and Pyramid Avenues. Development of a queue lane at this location would require relocation of the Town’s street sweeper cleanout and would cause additional operational conflict with public works, parks and recreation and Mountain Express.

• Close the station completely. In the staff report it is noted that there are two other stations in Gunnison and Taylor Park, “However, based on all the camping surrounding the Town of Crested Butte, and issues the community are facing with backcountry waste, this alternative could result in higher instances of illegal dumping in the backcountry due to the far distances to these stations.”

• Do nothing. While that is the least expensive alternative, staff is advocating for some sort of mitigation measures to take pressure off the nearby neighborhoods.

Regional discussion about opening other RV Dump Stations has started. But that is not something that will be fixed before the start of the upcoming summer season. Staff’s official recommendation will be to pursue the first alternative that will provide a queue lane off the street for the RV dump station, provide one point of access to enter the station, provide multiple ways to leave the station and disperse traffic and formalize the pay system and hours of operation.