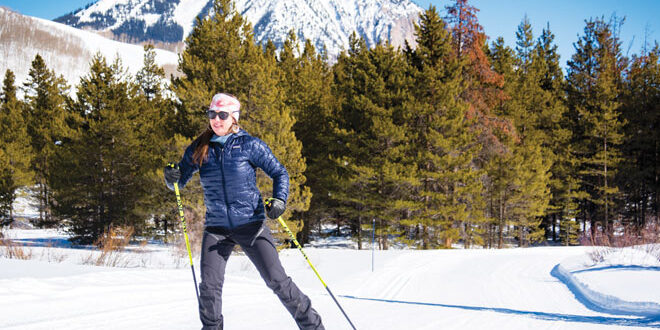 Christie Hicks smiles and says that San Luis Obispo, California was a beautiful place to grow up. It was a small city with a small-town feel, had the perfect climate and as a college and ranching town, it reminded her a little bit of the Gunnison Valley. Growing up, her family spent days on the lakes, car camping and water skiing.

Christie was a nationally ranked competitive swimmer, and the beach was only a 10-minute hike from home. However, at 17 she suffered a serious open fracture to her arm. “I was out at the lake with friends and I went off a rope swing, slipped and fell onto the rocks below,” she recalls of the injury. She had to be helicoptered out. It was 1996, the summer before her senior year and Christie was out for six months with multiple surgeries. “I never quite came back,” she says of her injury. She graduated the following year in 1997.

She had been recruited to swim for the University of Washington at Seattle, with a scholarship. “I still went, even with the injury, but I never got back to the same level as before. Swimmers train twice a day, six days a week, year-round with no break,” she explains. She decided to throw in the towel and transferred to Pomona College in Claremont, California. “When I quit swimming, I wanted to see what else there was to life,” she says. So, she set out to experience a variety of different things: Tae Kwon Do, ballroom dance, yoga and water ski club. “I wanted to do everything,” she says.

She signed up for the hardest major she felt she could handle – molecular biology. “I had been studying cell biology at University of Washington.”

It was a heavy load of academia and when she discovered that she didn’t love lab work, her focus switched to medical school. “I got great MCAT scores but delayed applying for one year to ensure it’s what I wanted to do,” she laughs and admits that she really didn’t like doctors at all. She wisely opted out and instead got a job teaching after she graduated in 2001.

Christie taught high school science for adjudicated youths in East L.A. – kids who were in gangs, had been arrested and were in juvenile hall. “The kids were from all over and really bad neighborhoods. Half of them were in a group home on campus and the rest were in foster homes. Some of them had committed violent crimes. I was only 21 and some of these kids were 18 and way bigger than me. We had to go through self defense training. The kids weren’t even allowed to take pencils home because they could stab someone,” she explains.

Despite the challenge and harshness of the job, Christie says, “I loved the people I worked with and it was really good for me, as a very privileged girl from the suburbs, to be immersed in this totally different culture. It was rough but it was really the best experience out of college I could have had,” she says of her four years there.

Christie took off seeking another path. She had applied to graduate schools for environmental science, “But the school that really captured my heart was the Audubon Expedition Institute. It was a degree in Environmental Education through Leslie University in Cambridge, Massachusetts.”

She explains that the campus was essentially a bus that traveled to different areas depending on what they were studying at the time.

“The bus was an intentional community,” she says. “We made all our decisions through full consensus. It was an outdoor school, we slept in tents outside the bus and classes were outdoors. It was experiential learning.”

The bus travelled to Alaska for a semester, spent another in the Southwest desert and by third semester, the class was motoring along the Eastern seaboard.

“It was lot of self-directed study. I focused on issues of social justice and experiential education,” she explains.

Christie became a student teacher for her fourth semester in Jackson Hole. “The bus was both the best and one of the hardest things I’ve ever done. It shaped my adult life,” she says.

She earned her Masters of Science in environmental education in 2006.

Before graduation, Christie had found summer work as a river guide in Haines, Alaska. “I loved working, living outside and loved Alaska.”

After graduation, she wanted to combine her love of teaching with the outdoors, so she took a position with the Canyonlands Field Institute in Moab, a river-based environmental education program for kids and adults that featured five-day camps and a river trip for middle schools as part of their curriculum. But guiding wasn’t paying her student loans or bills, Christie says. In 2006 she took a position teaching high school environmental studies and chemistry at a private boarding school for the arts in the mountains of Idlewild, California. During the summers she would return to work in Alaska.

Having taken her first yoga teacher’s training in 2003, she completed a 200-hour teacher training in Santa Monica in 2007. Christie moved to Idaho in 2010 because she wanted longer river trips. “Most of them were five or six days on the Salmon, Snake and Middle Fork of the Salmon.” It was summer work since she was still teaching at the arts school. “I had these parallel lives, a decade of teaching, river guiding and teaching yoga. All through my 20s and and 30s, I’d use work to get me to those places I wanted to go. I got jobs where I wanted to be, doing the things I loved.”

Alaska friends had told Christie about Crested Butte and having visited in 2008, she decided to make the move after her summer of river guiding. “I drove from California in my little VW Golf. I love the mountain culture even though I didn’t ski or mountain bike at that time, but I wanted to learn. I was enamored immediately.”

Within a week, she had the typical three jobs required for living the dream in town – a pass job at Adaptive Sports Center, serving at Uley’s and teaching at Yoga for the Peaceful. “And I just loved it all. I was a green-level skier scared to ski home from Uley’s,” she laughs. But she got one pair of Nordic skis and signed up for the Grand Traverse. “I’d take the lift up on my Nordics and ski down to try to learn.”

In way over her head, it took her and her partner 16 hours to get to Aspen. “My partner was a ballerina and had never done it either. But we finished,” she grins proudly. The following year she did it in 13 hours and claims it was way more fun. In 2015 she nailed it, coming in second overall for women in 10 hours.

During the summers, Christie did landscaping, taught yoga and worked in restaurants. Then, in the spring and fall, she’d return to Moab to river guide and teach environmental education. In 2012, she began managing the yoga studio in CB and organized a yoga trekking trip. “I’d never been to Nepal, so I coordinated the trek through Pemba Sherpa, a local Buttian.” Pemba guided the group to Everest base camp and although Christie says the yoga part didn’t work out so well, “The trekking was spectacular and it was fantastic to spend time with Pemba and his family in Nepal.”

That fall she landed a job with Youth International, a gap year, three-month backpacking program for high school kids through Thailand, India and Nepal.“By the end of that I was ready to settle back into adulthood. I’d been gallivanting around the globe. I was ready for something more permanent.” Canyonlands Field Institute hired her as the head naturalist guide. “Someone who explains nature to people, a narrator for the natural world,” she explains. Christie moved to Moab for the job, however, it wasn’t turning into a long-term position. “It was still only a nine-month position and I was almost 35 and ready to have more of a career.”
She was hired as the Wilderness Pursuit manager at Western Colorado University (WCU) in Gunnison at the end of 2013. Returning to CB she felt, “I had never really left it in my heart. All my friends were here. It was an awesome job that combined all of my interests in education and outdoors. I got to teach kids again and most importantly, I got to be outdoors and back in the valley I really love.” She bought a house in Gunnison but fell in love with the then mayor of Crested Butte, Aaron Huckstep, aka Huck, and was spending most of her time in CB, so the couple moved to CB South, and married in 2017. “I loved my WCU job but wanted to be in the Butte.”

When Keith Bauer retired from Crested Butte Nordic, Christie was hired as head honcho of the Nordic Center. “It was all hectic that year. I started my new job and got married. Now we’re just living the dream. I have a huge commitment to this community and that’s why I love working for CB Nordic, because it’s so integrated into this community on so many levels. When I moved here originally, I knew this was the place for me. The doors opened and it was so perfect. I knew I was here for good when I moved back.”