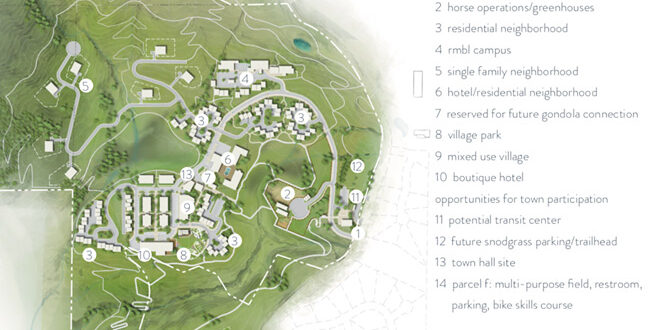 An eclectic community that respects the natural world

With the idea of developing a neighborhood that reflects the beauty and feel of the surrounding mountains, as well as the people who would want to live and work there, the owner of the North Village parcel in Mt. Crested Butte is striving to involve the broad community in his plans for the property. The bare bones conceptual design has been released and while it shows generally where residential and commercial pods would be located on the 150 acres at the base of Snodgrass Mountain, the meat of the project has yet to be detailed.

Claudio and Yvonne Alvarez purchased the property about two years ago and he said the idea was not so much to make money but to come up with a place he and his family could be comfortable in and proud of.
Speaking to Claudio last week it was obvious the family was not a big fan of traditional base area development commonly found in ski resorts. The big buildings, the tight development, the concrete was not appealing.

“The North Village property is so special and so beautiful. It is a unique piece of property inside a town,” he said during the hour-long interview. “We feel the town deserves a quaint neighborhood that mirrors the surrounding beauty. There is lots of greenery and we don’t want buildings on the ridgeline that would block the views of the incredible mountains. Our vision should be a community vision – so we want the town council and other stakeholders to help make a community vision.”

The North Village was originally meant to be the base area of a Snodgrass ski mountain with up to 3,800 units of residential and commercial building. But when the U.S. Forest Service turned down the application to expand lift-served skiing onto Snodgrass, the property sat vacant. There is a spot reserved for a potential reservoir meant to hold water for snowmaking and the town owns 17 acres earmarked for recreational playing fields. The North Village was basically downzoned in 2002 to allow for no more than 1,800 residential units and Alvarez said while no hard density number has been set with his proposal, it would be significantly less than that. The Rocky Mountain Biological Laboratory (RMBL) is a part of the plan with about 10 acres set aside for a campus that includes offices, laboratories and workforce housing.

The conceptual design, produced by Connect One Design of Basalt, includes space for a potential hotel and other commercial possibilities including a possible lift that would link the neighborhood to the existing ski area. Miles of trails will crisscross the property and a visitor’s center and community gathering spaces are part of the initial vision.

Not a normal developer
Alvarez is a former practicing doctor whose family has a history of ranching and confesses to being lucky when it comes to his financial status. A lover of nature, he sold the HMO business he started in Florida and now, among other things, owns a rum company started in Cuba by his family in 1872. He purchased a ranch at the bottom of Monarch Pass 15 years ago and was introduced to Mt. Crested Butte and the North Village property by local architect Jennifer Barvitsky.

Alvarez admits he is not a developer but describes himself as one of those guys that has to always be doing something. So, when he saw the North Village property, he started envisioning a new project that would hold some of the charm of Crested Butte while also helping RMBL.

“The vision should be one of the entire community,” he said. “We feel this 150 acres can help the town and make it even more special. We understand we are a tourist community, but locals want to live in a beautiful place and we want locals living here year round. So, we wanted to get the town council involved and want to help them with things like a post office, a multi-denomination chapel or new town hall for example.
“I don’t have the attitude that our idea is the only good idea,” Alvarez continued. “I think town needs a mixture of things and this provides a place.”

The development team, being led by Crocket Farnell of Black Dragon Development, has been working with the local Forest Service, trails people, open space and parks people. “The concept here is that you step out of your house and you can walk out in the greenery and look up and see beautiful mountains,” explained Alvarez. “There will be horses which I think is part of Colorado. Ian (Billick) wants traffic to Gothic managed well so the biological laboratory operations up in Gothic can work smoothly, so we are working to see how we can help manage that traffic. We want to move the current Snodgrass parking area that is on private property and increase the parking by shifting it to the proposed visitor center location just north of the current stables that would also have a transit center.”

Alvarez said he wants a tasteful entrance into the community off of Gothic Road. There would still be a Fantasy Ranch operation with the horses, stables and a barn but also a building for community events in the same area.

What do you want?
“Everything is up for grabs in terms of community housing,” he said. “My ultimate vision is an eclectic community with lots of local people living here. Lights in homes would be on year-round. We have had discussions with the Valley Housing Fund to see if we can help them with housing opportunities. We want to provide opportunity for whatever people think is important. People who live here will need facilities for things like health care. They’ll want to be able to get a coffee. We don’t know exactly what is needed but we want this to help give the town vibrancy and life.

“Since I’m not a developer I’m scared of doing something precipitously from an economic standpoint,” Alvarez admitted. “So I want to phase it in. The first phase would include the RMBL campus and some community housing. The expensive thing will be the infrastructure. So that’s the big question mark but I think we can overcome it by being methodical and phasing it in. The key, like in any successful business, is to stick with a good, long-term vision to accomplish this. Once we get the PUD, we’ll put it out there for people and let them help accomplish the vision.”

Farnell said the development would obviously provide any required deed restricted-housing, “but ideally we want mixed levels of income to be able to live here. The goal is to have an actual community. We want the overall site broadly zoned so it can develop organically,” he said. “We don’t want artificial constructs that sound good but don’t work in so-called planned communities. We are simply providing opportunity for meaningful growth for the town. To that end we have made significant efforts to engage the public.”

Alvarez said the project will not be done tomorrow and will grow over many years but he hopes it draws the type of people who are attracted to the valley now — those that love nature and are comfortable at the end of the road. He said his team is already considering how to be sustainable and have looked into incorporating solar and geothermal elements in the plan.

When it comes to picking his personal home site, Alvarez said he doesn’t anticipate living in a big house on top of the hill. “I want to live down low in the heart of the community so I can wake up in the morning and walk out and get that cup of coffee and talk to people.”

Farnell said it is his hope that the Mt. Crested Butte town council would jump in early and address some of its projects such as parking and playing fields so it could take advantage of scaling and crossover when infrastructure is being put in. “They could also consider leveraging their short-term lodging tax to get affordable housing built now and it will be a lot cheaper to do it all at the same time we are putting in infrastructure. There is a lot of opportunity here.

“I would love the town and Valley Housing Fund to come up with a plan for additional workforce housing,” Farnell continued. “It is a golden opportunity to do something significant in a short event horizon. But that takes cohesion across the valley.”

Alvarez emphasized that he has no interest in having an “other side of the tracks” feel with workforce housing separated from the main community. “We honestly want an eclectic community where everyone blends in nicely,” he said.

Timing…
The idea is to take more input from the public and then submit a formal PUD application to the town. Given the extensive preliminary work that’s been done, Farnell hopes for a smooth and relatively quick approval. From there he said civil design work could take place next winter and shovels could turn dirt in the summer of 2022. Alvarez said completion of the project’s first phase that would include the RMBL campus, new parking areas, a visitor’s center and some housing could be ready three to four years from now. Whether he’ll be able to grab a cup of coffee in the morning in a new community at the base of Snodgrass by 2024 is still too far away for anyone to say for sure.

A virtual open house is slated for March 11 at 5:30 p.m. and everyone is encouraged to attend and provide input. Any questions can be emailed to info@connectonedesign.com