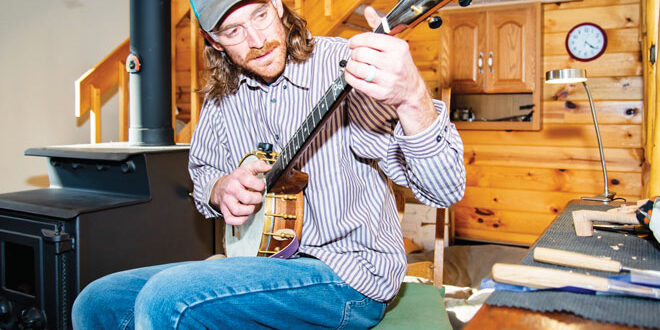 It seems as though Matt Lackey was destined to be a musician and luthier, all beginning with a childhood discovery when he was 11 years old and found a forgotten guitar in his grandmother’s attic. His dad had bought the guitar for Matt’s older brother, who then decided he didn’t want to play music.

“Dad taught me how to play a Creedence Clearwater Revival song, only three chords, the only ones Dad knew and the only ones he said I needed to start playing,” he recalls (those chords are G, C and D). Hooked on guitar at that influential age, Matt discovered his love for music. “I didn’t know where it was going to take me but it felt right,” he says of the transforming moment for the then 11-year old. When Matt was 4, the family moved from Danville, Virginia, to Concord, North Carolina when his father took a job as a mechanic and machinist for a race car team. Matt says that his dad’s job was to sit in a room all day and try to make the engines go faster. His mother worked for a bank. As the youngest of three kids, Matt admits he was spoiled, “Oh yes, I’m a mama’s boy,” he smiles.

As a child, he played baseball and basketball but he confesses, “I couldn’t make the teams.” In high school, Matt became more social. “I was just figuring out my grounds and who I was. I showed interest in some sports but high school was a transitional point.” And that’s when his focus changed. “I picked up the electric guitar,” he says, which was a different animal than the acoustic guitar from the attic. With the Internet barely alive and shuffling along in the mid-to-late 1990s, Matt self-learned guitar techniques through online lessons, finding guitar “tabs” for songs but he recalls the pain of the slow download of that era. “It was hideous how long it took to get online and you’d get online just to get kicked off.”

He persevered and found two other neighborhood friends who were also budding musicians. “They were into Nirvana grunge-type music.” Once they learned Matt knew just enough, they formed a band. “What was cool about them was they knew the tricks, the techniques. They played guitar and bass. There was a lot of jamming and they were part of the reason I started losing my grades because all I could think about in class was going over to their house after school and playing. We did school talent shows. We played a coffee shop downtown and that was the height of our career playing together.” Eventually, Matt joined a different band, a popular high school band that was composing their own songs. “We pushed that whole garage band scene because we weren’t of age yet so the only place we could play was in our garage,” he laughs.

Four years after his 2004 graduation, the band, named Offshore, headed off to find music and fame in San Francisco. They had gone through a variety of genres but moved more into reggae. “We had a love for music. I expanded into other musical instruments, mainly bass and drums. San Francisco was amazing. I had the greatest experience. I grew up in a conservative area in the south and San Francisco was a different taste of life. I met a whole different culture of people and I needed that because I had been around that one thing, conservatism, my whole life.”

Matt had moved away from home specifically for music but felt that his bandmates had lost track of their original music dream. A year later, he returned home to North Carolina because they weren’t playing enough and he missed his family. He discovered the mandolin in 2012, “Which led me to bluegrass music. My band buddy found his grandfather’s mandolin in the attic and brought it to band practice one day. I loved it. That was the ticket, it got me hooked on bluegrass. I left to go looking for music and I came to realize that my favorite music, bluegrass, was where I was born,” he says of his cultural heritage.

Matt had learned the trade of cutting and installing granite countertops before he moved to California and that talent allowed him to gain work right away and enabled him to live in the very expensive Bay Area. When he returned to North Carolina, he went back to work at that trade. “Doing granite has always been my ledge to pull myself back up on,” he says. But he was also playing music with other musicians. Seeing how interested he was in the mandolin, Matt’s father gave him one for Christmas in 2012. ”This is where the biggest transition in my life happened. I played that mando and literally wore it out,” he grins. He decided that he needed to invest in a quality instrument, “I felt it was time to buy a really expensive instrument because I just wanted to advance to that level. I wanted to sound cool and look cool. I wanted to look how I felt.”

Matt was committed to spending a few thousand dollars on a good mandolin when a friend suggested that he look into building his own for that price.”Gears started turning from that point on. I started talking to everybody and anybody about what it was going to take to build an instrument. I was enlightened to the point that I thought I could do it based on what everyone was telling me.”

Fortunately, his dad had a woodshop at the house. Matt invested in a really expensive piece of wood for his project, “A quilted maple from Canada. My dad told me I should get cheaper wood to start with so I built the first one out of mahogany. It was pretty awesome. I gave it to my dad. He doesn’t play but he’s a music appreciator.” He then built his second mandolin from the maple, having learned from the first build, “The whole experience of building an instrument has been a progression of understanding. Each instrument gets better than the last.”

That first mandolin generated enough interest that musicians wanted to purchase it, to which Matt responded, “The first one’s not for sale but I’ll build you one.” He left his full-time job at the granite shop to pursue building instruments, which later evolved into building fiddles. “I started going to fiddle conventions. I wanted to dive into that scene, meet more clientele and learn more about the music. I was going to these festivals carrying around a mandolin,” but the fiddling moved him and he felt he wanted to explore that genre musically. “I wanted to be a fiddler. It wasn’t that far a jump into making fiddles.” He had made nine mandos before taking on his first fiddle project. “I could feel my fiddle love was surpassing my love for the mandolin.”

After helping a friend build a gourd banjo, Matt dove into making one for himself, “At this point, I had to build my instruments, it was too easy to go out and buy one.” The banjo just didn’t call to him like the fiddle did, however, he was now considered a bonafide acoustical engineer, or luthier. “I hear a different quality, overall tone and playability,” he says of each new instrument he creates. He’s made 17 mandolins, seven fiddles and three banjos to date.

Matt detoured west to Colorado from a moonshine run for a friend in West Virginia. “I had a good buddy who was making good stuff. I was going to a music fest in West Virginia and to deliver moonshine to a friend.” The friend was going to an old-time music festival in Berthoud. Matt was curious about the scene in Colorado, “I wanted to see how these people were playing that type of music, having gone to festivals on the east coast and the south. I was ready to stretch my wings.”

He brought two of his newly made fiddles that summer of 2018, to sell and promote his business, “And that’s where I met Lizzy,” he grins of his new bride and fellow musician, Lizzy Plotkin. “She was interested in my fiddle and I was interested in her. She bought my fiddle and she took me to the airport and we smooched and that was all she wrote.” He made the move to Almont in 2019. “I had intentions of moving her back to North Carolina, but that didn’t work,” he laughs. “It’s expensive here and I ran out of money fast so I had to resort back to my secret weapon, the granite shop.” He landed a job making twice as much in wages as he could back east doing granite. The couple married in 2020 and are now proud owners of a house up Spring Creek. “I’ve built a wood shop and hope to transition into being a woodworker full time, not just a luthier,” he says of wanting to expand his business into making cabinets and furniture, “I want to do it all.”

Matt’s discovered skiing, too. “It’s an added bonus to living here and it’s become an outlet for me to express my thrill-seeking extreme side. Colorado has got it all when it comes to living life ­— it’s got my woman here, music, pretty views, outdoor activities and everything to encourage you to live a strong, healthy life both spiritually and mentally. This whole acoustical music experience has been a spiritual experience. It’s brought me closer to God in my life and I feel like all of these things have been given to me as blessings from God. People out here are trying to live their longest, healthiest life.” In their new lives together, Matt and Lizzy spend a lot of time playing music. “We play often around the house and I like that more intimate setting of home rather than on stage. I do miss my family. COVID keeps me from going back to see them but I want to go back and catch up with everything and once we all get vaccinated, that can become a reality again.”
You can check out Matt’s work at Lackey Instruments on Facebook.