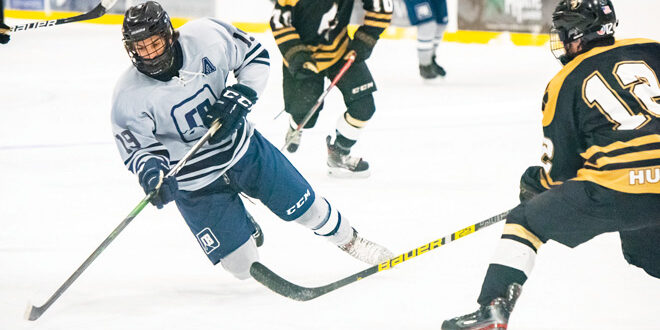 he Crested Butte Titans hockey team took matters into their own hands and punched their ticket to the 4A state hockey tournament with a 5-1 win over the Battle Mountain Huskies on Tuesday, March 9 in Gunnison.

They had been waiting all season long for this showdown and a shot at state but they had to get there with their record intact. They did that part of the job coming into the game Tuesday night with a record of 8-0 and battle Mountain kept up their end of the deal also as they entered the game 9-1-1 with the winner sealing their spot at the state tournament.

Despite the long bus ride to Gunnison, Battle Mountain came out ready to play setting the pace up and down the ice. The Titans remained composed through the first three minutes opening a couple shots of their own but a Crested Butte penalty had Battle Mountain in form to open the scoring.

They proved patient on their powerplay to get a handful of shots off but Titans’ goalie TJ Wonnacott made key saves during the attack with his players in front of him blocking other shots as Crested Butte killed the penalty and then took off from there.

“They came out hard but our kids played great, really tight defense and forcing shots from outside,” says coach Billy Watson.

The Titans opened the scoring in the ninth minute of the first period during a powerplay when Adam Collins fired a shot from the blue line with Colm Piccaro set up in the slot and Piccaro tipped the puck past the Battle Mountain goalie.

Crested Butte continued to step up their pressure in the neutral zone with heavy forechecking and backchecking and that effort led to a second Titans’ goal. As Battle Mountain looked to break out, a backcheck gave the puck to Rowan Piccaro. Rowan tripped up but fired a shot while he stepped back on his skates to beat the unsuspecting net minder for a 2-0 Titans’ lead.

Two minutes later Joseph Stock took advantage of a second effort play from Rowan and with some quick stick work opened up a shooting lane in close and finished for a 3-0 Titans’ lead by the end of the first period.

“Once we got established and playing more in their end it was hard for them to keep up,” says Watson. “It was a nice lead to have after the first period.”

The second period proved erratic for both teams up and down the ice. Battle Mountain struggled to establish any puck possession and when they did create a couple odd man rushes, the Titans and Wonnacott stopped every look Battle Mountain managed to put together.

“Our physical presence was a big thing and they just looked tentative,” says Watson. “We were breaking things up and getting great backchecking from our forwards. Out backchecking and forechecking was the difference.”

Meanwhile, when Crested Butte looked to counter, there was Battle Mountain to disrupt the play and keep Crested Butte uncomfortable as the teams skated through a scoreless second period.

“We were trying to stick to our game plan and they switched things up on us,” says Watson. “I think we were a little too overzealous leaving our defensive zone too early.”

Battle Mountain eventually found the back of the Titans’ net five minutes into the third period and things could have slipped further for Crested Butte from there. But, the Titans proved their resiliency once again as they clamped down like they had all game and got back to physical play and good puck movement.

Another quality forecheck in the neutral zone picked the puck off a Battle Mountain player and Rowan gathered it up and turned up the wing on attack. While he carried it up ice, Braydon Duncan, as he always does, got on his horse and skated straight to net dropping to a knee to stall his run and giving Rowan enough time to find him in the slot with a pass and Duncan buried it.

A minute later, Duncan’s effort did it again as he skated to a loose puck to get it to Stock. Stock took a look to find Rowan on the backdoor with a pass and Rowan netted his second goal of the game ultimately finishing off the 5-1 win.

“That just shows that they continue to get the job done and answer back as a team,” says Watson.
The win earns Crested Butte the Mountain Conference title and gets them one of four spots at the 4A state tournament starting with the semifinals on Wednesday, March 17. The 4A state championships will then be the next day on Thursday, March 18.

“They all know we have another step to take to get closer to that end goal,” says Watson. “They’re really motivated and have been ever since we started dry land training ”

“But, even a blind squirrel gets the acorn some days.” [ by Than Acuff ] …