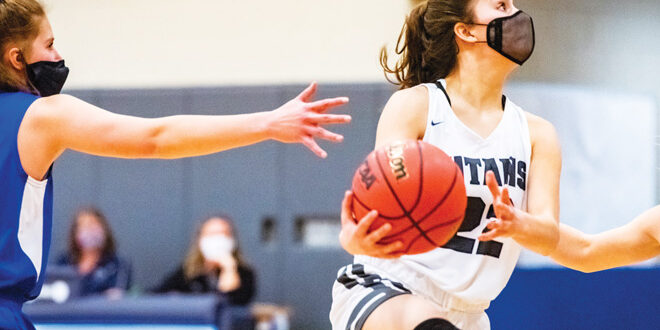 The Crested Butte Titans girls’ basketball team finished off the 2021 season on a roll winning their last three games to finish 6-7 overall. It was quite the turnaround given what the team had been through for the past six years.

From 2014-2019, the team had won just seven games total. As a result, the team dropped to a JV schedule last year in an effort to start over, get a taste for winning, focus on development rather than results and prepare for the long haul back to varsity play.

Senior Sophia Truex was a part of the lean years having played for the team as a freshman and sophomore that won just two games and often lost games by anywhere from 20-40 points.

“It was definitely a test of our commitment and our determination to come together as a team,” says Truex.
But the program turned a corner last year playing a JV schedule and Truex could see a light at the end of the tunnel.

“At first we were all surprised about the decision to play a JV schedule but it ended up being a really positive morale booster,” says Truex.

Typically, when a program drops to JV play, it’s a two-year commitment but when Amanda Reynolds stepped into the head coach position, she insisted the team had to return to a varsity schedule. Risky perhaps, but the team had a couple of things working in their favor. For one, they had six seniors. Secondly, Amanda’s daughter Blakeley Reynolds joined the team last season during the JV schedule, proving a penchant for tough play and scoring points. Thirdly, the team had senior Colleen Harris join the team for this season after her family moved to Crested Butte last year.

“The team was made up of all different assets and we could show what we’re good at and improve in other areas,” says Truex.

They opened the season with a couple of wins but then fell into a five-game slump before regaining their momentum to knock off a couple more wins. Their season came to a climactic close in the end though, winning their final three games to finish 6-7.

It started on Tuesday, March 2 with a 47-35 win over Gunnison. Crested Butte took a tenuous 24-22 lead into halftime but broke the game open in the third quarter outscoring Gunnison 16-9 and carried that lead through the fourth quarter for the win. Colleen Harris led all scorers with 28 points, Blakeley Reynolds knocked down eight points and Ellie Duryea tacked on seven points.

“We always know when we play Gunnison it’s going to be a game and I was proud of how we executed some aspects of our game,” says Amanda.

The Custer County game on Friday, March 5 had a special energy to it for the Titan girls. Not only was it senior night and the final game of the season for the team, it was also the final home game ever for six seniors.

Crested Butte jumped out to a 20-7 lead in the first quarter and never looked back eventually finishing Custer County off 62-50. Both Harris and Blakeley scored over 20 points with some of the seniors getting into the scoring as well including one senior scoring her first varsity point ever.

“Moments like that brings me coming back for more,” says Amanda. “Everything about that game that night was just so special.”

The Titans finished off their late season run the following day in South Park cruising to a 37-29 win.
“I’m so glad it came together like it did so these athletes could see what it looks like and what it feels like,” says Amanda.

“It was really exciting to see that transformation come together this season,” adds Truex. “It was the best ending for my career I could have hoped for.”

Amanda now looks ahead and credits the seniors for everything the team accomplished this season and sees it as setting the foundation for the future.

“The seniors that played and stuck through those seasons that were really tough set us up for the future,” says Amanda. “They are leaving us with a lasting legacy with their camaraderie and their willingness to teach the younger players. We’re graduating six athletes that are just remarkable human beings.”