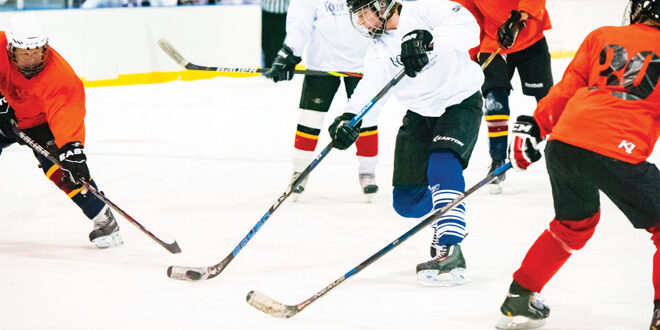 The Eldo might not have the best team, but they definitely have the best fans and a fervent fan base can make all of the difference when it’s a tight game. Unfortunately, it wasn’t a tight game Monday night in the first round of the town league hockey playoffs as Kochevar’s skated to a 9-3 win over the Eldo, despite the Eldo faithful.

It didn’t start out that bad for the Eldo as they came to play that night. They had taken down Kochevar’s earlier in the season so while, player for player, Kochevar’s is the deeper team, the idea of the Eldo handing Kochevar’s a post season upset loss was not beyond possible.

But, like I said, the Eldo was in the mix for the first period and even some of the second period.
They got an early chance when Axel Deer broke free on a loose puck but Kochevar’s goalie Eric DiMarco charged way off his line to sweep the puck clear of Deer.

The Eldo got another chance to capitalize on their early game energy when Kochevar’s was hit with a penalty but the powerplay opportunity backfired as Oliver Houseman skated in off the blue line for Kochevar’s and dropped the puck to Isaac Long who banged the puck off both posts and in for a shorthanded goal.

And while a shorthanded goal can sting, it had little effect on the Eldo’s mojo as they responded 50 seconds later when Brandon Muller battled for the puck in the corner to feed Deer for a one-timer tying the game 1-1.
Kochevar’s, while noticeably sluggish as a team to start, did have a couple of players carrying the energy for them and that was all they needed. Both Houseman and Long were on point and while Sam Reaman managed to find some openings for shots, they were either off the mark or stopped by Devun Carrillo.

Eventually they picked up the pace as the first period wore on to notch two more goals before the end of the first period. Kochevar’s took a 2-1 lead in the ninth minute when a shot from Jake Sunter was blocked but dropped to the ice for Austin Noel to poke in. A minute later Long, the elder statesman of the team, struck again as he skated into the offensive zone between the faceoff circles to blast a slapshot past Carrillo for a 3-1 Kochevar’s lead.

Reaman opened the second period with a goal for a 4-1 lead but the succession of shots merely had Carrillo step his game up a notch and the Eldo continued to get players in the slot to help Carrillo with his effort.
The Eldo, and their fans, got a massive boost four minutes into the second period as Jeff Duke skated up the boards and gained some room with a little shake-and-bake to then find Alex Albers open in the slot and Albers punched it home and we still had ourselves a game.

That is until two minutes later when the wheels fell completely off the Eldo bus. Sam Evans netted a powerplay goal in the sixth minute of the second period to put Kochevar’s up 5-2. After killing off another penalty, the Eldo started gaining some traction but when their goal was waived off, bedlam ensued. The fans went ballistic at the call and the Eldo’s top player expressed his disappointment with the ruling earning him a game misconduct and ejection from the game. Well, that and maybe some other thoughts he shared with the officials earlier in the game.

Yell at me once, shame on you. Yell at me twice, shame on you again. Yell at me a third time, hit the showers.
Carrillo and the remaining Eldo players did what they could to try to hang on but the floodgates opened up midway through the third period.

Connor Mog connected with Noel to put Kochevar’s up 6-2. Ninety seconds later Matty Cahir scored off an assist from Reaman. Deer and Albers did team up for one last Eldo goal but Kochevar’s shut the door for good scoring two more goals in the final two minutes for the 9-3 win.