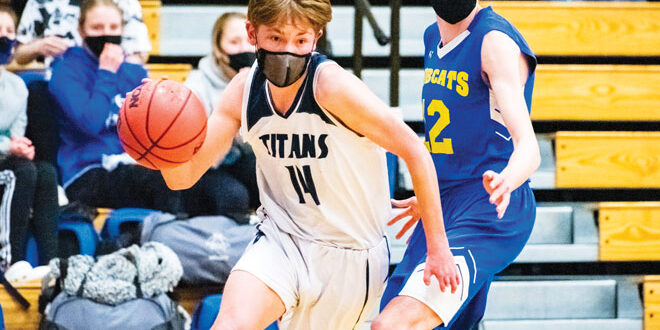 Regardless of how the post season plays out for the Crested Butte Titans, their final home game of the regular season will go down as one of the all time classic games in Titan history as Crested Butte battled through four quarters and two overtimes before beating the Custer County Bobcats 61-56.

The week started off rough as the Titans hosted a red hot Gunnison Cowboys team on Tuesday, March 2. The Cowboys proved automatic inside the paint, from the perimeter and at the free throw line as they rolled to a 71-42 win.

“We ran into a team that is clicking on all cylinders and we came out flat and eventually fell too far behind to make any sort of comeback,” says coach Brandin Hamilton.

The Titans then turned their attention to their next match up against Custer County and Hamilton knew it was going to be a tough game against the Bobcats. While they came into Mt. Olympus on Friday, March 5 with a 5-7 record, it was far from an accurate representation of Custer County’s ability.

“They’re the best team with a losing record,” says Hamilton. “They’d lost a lot of close ones to really good teams.”

It was obvious from the start that the game would be a dogfight as Custer County’s chaos left the Titans uneasy at both ends of the court. Crested Butte found ways to score but remained uneasy on offense and was down 13-11 at the end of the first quarter.

“We just couldn’t get going offensively and were out of sorts,” says Hamilton.

But the Titans resiliency showed and while the Bobcats continued to find ways to score, so did the Titans and the two teams continued brawling through the second quarter. Custer County continued to hold their slim lead though and came up out of a loose ball scramble to score at the buzzer to take a 21-18 lead into halftime.

“We had that feeling that we were frustrated and that happened throughout the first half,” says Hamilton. “I think the boys felt like they should have been up by 20 and weren’t. But I still felt good about where we were going into halftime and just had to figure some stuff out.”

Crested Butte’s defense then turned the tide in the Titan’s favor to open the third quarter. The Titans stopped Custer County on their first three trips up the court and the offense found some rhythm as Erik Wasinger hit a three pointer, John Penny and Grayson White scored in the paint and a steal, lay up from Wasinger capped a 9-0 run to pull the Titans ahead 27-21.

The Bobcats called a timeout and then pulled back into the game the remainder of the third quarter eventually knotting the game 30-30 with two free throws after the buzzer setting the stage for more mayhem in the fourth.

Crested Butte opened the fourth quarter with another 9-0 run as Wasinger found seams in the Bobcat defense, White tipped in an offensive rebound and Prieto drained a three-pointer. Yet, once again, Custer County responded catching fire from three-point range to pull back into the game eventually hitting another buzzer beater to tie the game 43-43 forcing the game into overtime.

“I think we lost focus and went flat again and as the game wore on, Custer County got more comfortable with how to get shots,” says Hamilton. “They got more confident and started getting better looks.”

The game then shot into overdrive in the first overtime. Wasinger and White hit big free throws at the start of the overtime and when Penny sank a three pointer, Crested Butte was back on top 53-49. But, the Custer County shooters could not miss from behind the arc and had a chance to take the lead with 11 seconds left with the game tied 54-54. They missed their final shot and White grabbed the rebound and went the length of the court with the clock ticking and when he drove to the hoop, a foul was called and the buzzer sounded sending White to the line to seal the win. Both of White’s shots bounced around the rim but fell to the wrong side and the two teams would then have another four-minute overtime to decide who would win.

“I just told the guys I was impressed with their resolve and they just had the attitude of, ‘alright, we got more basketball to play.’”

The Bobcats frenzy ultimately cracked as the Titans’ composure would be the final decider. After racking up a couple blocks and battling all game for rebounds, Owen Forsythe hit a massive turnaround jumper to put Crested Butte up 57-56. White then stole the ball on the next Bobcat possession and found Wasinger up court for a lay up and a 59-56 Titans’ lead. Crested Butte then tightened up on the perimeter to give Custer County no room to shoot and an offensive foul by the Bobcats gave the ball back to Crested Butte.

Down three points, Custer County was forced to foul, so they did, sending White back to the line. This time White hit both to seal the 61-56 win. Wasinger led the Titans with 23 points, Prieto scored 17 and White tacked on 11 points.

“I think our depth and staying out of foul trouble allowed us to play defense the way we wanted through the overtimes,” says Hamilton. “It was a war of attrition. Eventually we were going to grind it out.”

Crested Butte hit the road the next day to close out the regular season with a 62-35 win over South Park. Wasinger led again with 25 points and White scored 16.

Crested Butte now heads into the post season the number 23 seed to face 10th seeded Ignacio but Hamilton believes that means nothing as he feels he has a team that can do some damage to higher seeded programs.
“We have the guys that can do it,” says Hamilton. “I think we can beat anyone in 2A when we’re clicking on all cylinders.”

A win in Ignacio will then send them on to face Sanford on Thursday, March 11.