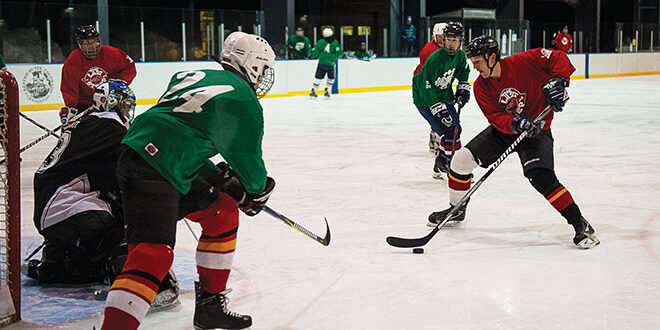 Pandemic be damned as the Crested Butte Town League hockey season continued through the winter and the playoffs start next week. It has been a great season so far and there’s no question three to four teams are legitimate contenders for the town league title. So, if you haven’t made it to a game, you should, just don’t forget to follow COVID protocols.

The Last Steep bench was down to one player and Last Steep player/manager/owner Sean Hartigan had only one thing to say to his team prior to the game.

“We gotta skate our balls off.”

The six players that were there took heed as they gave the Last Steep a run for their money never wavering in their effort to rack up a win, even without their star player Shane McGuinness. Hartigan is no fool though and he knew McGuinness’ attendance would be hampered due to his role as assistant coach for the Crested Butte Titans hockey team, the number-one ranked 4A team in the state.

With that in mind he picked up Collin Dill, an acquisition that nearly paid off on that evening and certainly will pay off in the playoffs if Dill, McGuinness and the entire Last Steep team are able to suit up for a post season run.

That said, slow and steady won the race for the Brick Oven in the end and while the Last Steep did provide surges to remain in the hunt for the win, the steadiness of the Brick Oven through all three periods made the difference in the end.

While the Last Steep opened the game “skating their balls off,” the Brick Oven bided its time through the first four minutes and struck first when Tim “Pope on a Rope” Poppe scored off an assist from Kent Preston.
The Brick Oven nearly added a second goal when the puck kicked up off goalie Lucas McMullen’s stick but he swatted at it in mid air to knock it off the post and wide of the net.

The Last Steep tasted blood though and they kept pushing and tied the game up in the seventh minute as James Brennan set up Dill for a goal to keep their energy going into the break.

The Last Steep came into the second period en fuego scoring two more goals in the first two minutes. Mike Wright put the Last Steep up 2-1 poking the puck past Devun Carrillo and then Dill attacked the offensive zone to draw three Brick Oven players before dropping the puck to Mark Goldberg and Goldberg blasted a wrist shot past Carrillo.

The Brick Oven remained unfazed at the Last Steep’s near foolhardy pace though and as the period wore on, the Last Steep wore down. The Brick Oven proved clinical in their patience as the neutral ice work of Doug Collin and Chelsea Murray proved integral to the Brick Oven’s success with two goals from Ted Trujillo, one of which came from a massive effort from Evan Albanese, tying the game 3-3 heading into the third period.

The Brick Oven retook the lead in the third minute of the third period as a shot from Albanese kicked off a defenseman’s stick and trickled past McMullen. But Dill answered back 28 seconds later to slice through the Brick Oven zone and finished with a backhand.

The Last Steep then lured the Brick Oven into five minutes of chaos as the two teams traded off rushes up and down the ice but that merely opened the game up for Trujillo as he netted another goal to put the Brick Oven back on top 5-4.

The Last Steep came right back though to provide Dill a chance to score again as well tying the game back up 5-5 with 90 seconds left in regulation.

But, again, slow and steady wins the race and the Brick Oven settled back into their game of positional hockey and with the Last Steep pressing, the Brick Oven remained solid on defense eventually opening up Albanese to break free and slip the puck past McMullen in the final minute for the 6-5 Brick Oven win.