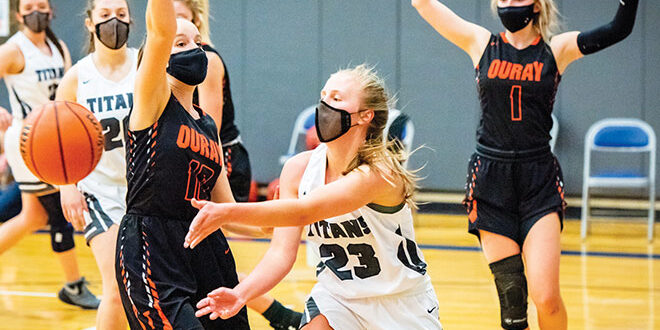 End slide with win over Ouray

The Crested Butte Titans girls’ basketball team put an end to a five-game slide when they handed the Ouray Trojans a 43-38 loss on Tuesday, February 23.

The team had struggled all season long with sleepy play in the first quarter of games. To help change that, coach Amanda Reynolds opened the game against the Trojans with a press and the ploy worked as Ouray was flustered and the Titans built a 12-5 lead by the end of the first quarter.

Solid rebounding and patience on offense continued to carry the Titans through the second quarter with nearly everyone contributing. Colleen Harris threaded through the Trojan defense for a bucket, Sophia Truex picked off a pass and went the length of the court for a lay up, Alex Downey drained a shot from the elbow and when Blakeley Reynolds buried a 14-foot jumper, the Titans were up 24-10 with three minutes left in the half.

They struggled in the third quarter as their rebounding subsided and shots stopped falling allowing Ouray to pull back within six points but regrouped during the break before the fourth quarter. Harris opened the fourth with a three-pointer and a couple steals for lay ups. Blakeley knocked down some free throws and Hayes Freeman banked her shot in off the glass as the Titans remained in the driver’s seat until the end for the 43-38 win. Harris led the team with 24 points with Blakeley scoring double digits as well and some key points from across the roster.

“It’s just a matter of putting the pieces together all at once and they’re really starting to do that,” says Reynolds.

The pieces fell apart though when they headed to Del Norte three days later. Del Norte is always a tough venue for any team and the Titans struggled to get comfortable on both sides of the ball throughout the entire game eventually falling 38-31.

“Our offense wasn’t clicking like it had in the past and it’s a hard environment to play in,” says Reynolds.
The following day the Titans returned to a more comfortable environment when they hosted the Monte Vista Pirates on Saturday, February 27 and it showed throughout the game.

Monte Vista looked to trip up the Titans early opening the game with a press but Crested Butte managed the pressure to take an early 7-4 lead. The Pirates climbed back into the game to tie it up 13-13 but the effort of Freeman down the stretch opened up a three pointer for Harris at the buzzer to put the Titans back on top 16-13.

Solid rebounding and production on offense from a variety of Titans helped pace them through the second quarter but Monte Vista matched the Titans point for point and the Titans entered halftime down 29-28.
Crested Butte struggled in the third quarter as Monte Vista stepped up their game to battle for rebounds and take control of the game to build a 43-35 lead on the Titans. The one bright spot from the quarter is Monte Vista’s aggressive play resulted in numerous fouls that would then play out in the fourth quarter.

Freeman, Ellie Duryea and Harris combined to score the first five points of the fourth quarter to help get Crested Butte back on track. Monte Vista countered with more buckets but also picked up more fouls and started losing starters to foul trouble midway through the fourth quarter.

Down eight points with three minutes left in the game, Crested Butte switched up their press forcing numerous turnovers that led to a 9-0 run and a 54-53 Titans’ lead and a Monte Vista timeout.

The game eventually came down to the wire and the Pirates retook the lead 56-55 with five seconds left. Mara Pennie came up with a big steal to set up Blakeley for a final shot but the ball dinked off the rim and out leaving the Titans with a tough 56-55 loss. While Harris and Blakeley led the team in scoring, the Titans got key production from Duryea, Truex and Freeman as well.

“That’s huge for us and I feel like we were firing as a team,” says Reynolds. “We were running our offense really efficiently and we’re getting good at finding elements we can expose. That’s a sign things are headed in the right direction.”

The Titans close out the season this weekend as they host Custer County on Friday, March 5 at 5:30 p.m. and then head to South Park on Saturday, March 6.

“As long as we stay in the game, I have a lot of confidence in our team,” says Reynolds. “They are competitors.”