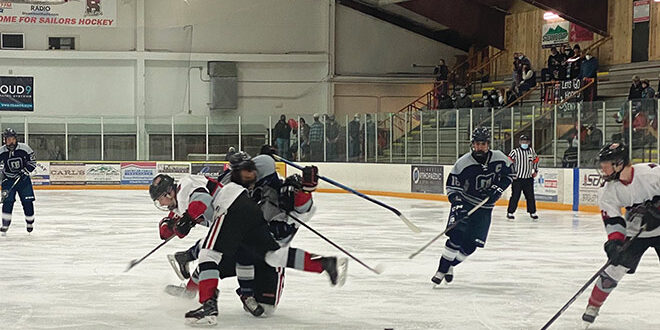 “Every game is game seven from now on”

With their latest 4-2 win over the Steamboat Springs Sailors on Friday, February 26, the Crested Butte Titans hockey team is now 8-0 and remain at the top of the Mountain League standings.

The Sailors have always been a thorn in the Titans’ side and while they had a slow start to their season, they were gaining steam having rattled off a couple of big upsets leading up to their game with Crested Butte.
Furthermore, it was senior night Friday night and the Sailor players were treated to a full smoke and light show as they took to the ice for the showdown with Crested Butte.

Steamboat took the energy from the pre-game pomp and circumstance into the first period setting the tone for the pace of the game in the early stages. In addition, Steamboat’s defense did a stellar job of shutting off opportunities for the Titans on net.

Titans’ goalie TJ Wonnacott came up with numerous big saves to hold off the initial surge and the Titans were able to counter the Sailors’ effort on loose pucks and physical play.

“They came out pretty hard and they tried to play a more physical game against us,” says coach Billy Watson. “They wanted to bring it and be physical with us but our stronger kids were winning the battles.”

Oftentimes though, physical play can result in penalties and the Titans were charged with a five-minute major following one particular hit and left to play a man down for the final five minutes of the first period.
Crested Butte’s penalty kill handcuffed the Sailors for most of the five-minute major penalty but Steamboat eventually broke the seal on Wonnacott in the final minute of the first period for a 1-0 Steamboat lead.
“TJ stood on his head in goal and we could have easily been down 3-0,” says Watson.

An entirely different Titans team returned to the ice in the second period putting on a show of what they are actually capable of as a team. Crested Butte immediately took over the energy of the arena with their puck movement and speed up and down the ice.

Crested Butte tied the game up three minutes into the second when Joseph Stock scored off an assist from Brendan Hartigan and they kept the throttle down looking to take the lead on a series of powerplays.

While the Titans’ powerplay was patient and opened up some chances, Steamboat’s goalie and their defense remained tight to hold off Crested Butte. Crested Butte showed no signs of slowing down though and while they never scored during their powerplays, they eventually took the lead in the 14th minute when Matthew Solanik drove at the near post from the wing and stuffed the puck through for a 2-1 Titans’ lead by the end of the second period.

“We had a little regroup between periods with some great leadership in the locker room from Braydon Duncan,” says Watson. “We had too many turnovers in the first period and we got that under control and were doing the simple things that we weren’t doing in the first period.

Crested Butte then added to their lead four minutes into the third period with one of the sweetest goals of the season. Sam Buckhanan carried the puck up ice and at the post drawing a Steamboat player who laid out to block the centering pass. Buckhanan then lifted the puck over the splayed out defenseman to Sam Dukeman in the slot and Dukeman swatted it home for a 3-1 Titans’ lead.

“That was an incredible pass and Sam was where he needed to be in the right spot,” says Watson.
The Sailors came close to cutting into the Titans’ lead during a powerplay but a Wonnacott save shut them down and when Jack Lambert sliced through three Steamboat players to score, Crested Butte was up 4-1 with eight minutes left to play.

The Titans had a chance to put the final nail in the coffin up 4-1 and in a powerplay situation but Steamboat caught the Titans sleeping to score a short-handed goal with five minutes left to play.

Nevertheless, Crested Butte remained focused on their game and ramped back up for the final four minutes to seal the 4-2 win and remain undefeated for the season.

The Titans still have two games remaining in the regular season though including hosting Battle Mountain on Tuesday, March 9 at 4:30 p.m. Battle Mountain sits in second place right behind Crested Butte and the winner of that game ends up winning the league. The Titans need to remain focused though as they return to the ice on Wednesday to play Summit in the last game of the regular season.

“We control our own destiny at this point and everyone has the same goal in mind,” says Watson. “We just need to bring our game and keep it simple. Every game is game seven from now on. I think the boys are ready for it.”