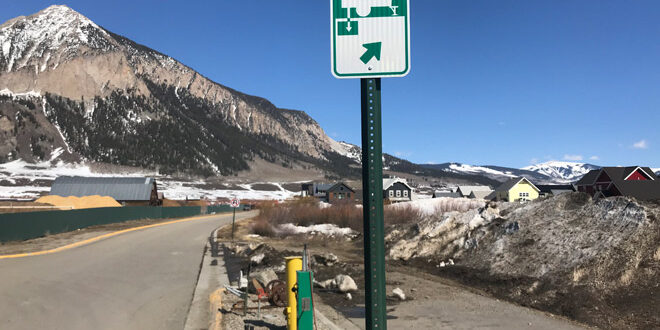 The Crested Butte town council will revisit its decision to not open the RV Dump Station located by the Crested Butte wastewater treatment plant this summer. The controversial decision was made earlier this month on a split vote and while many residents in the neighborhood applauded the decision, regional partners working on backcountry mitigation efforts were surprised and disappointed by the move. Council will relook at the decision during its May 17 meeting.

Gunnison County commissioner Jonathan Houck sits on the Sustainable Tourism and Outdoor Recreation (STOR) committee and told the council at a work session on Monday, April 19 that there seemed to be general consensus on STOR that progress on relocating the RV Dump was moving in a good direction. “But all of the partners were caught off guard by the council action and frustration over the decision was expressed at our meeting where we thought we would be discussing alternatives.”

Mayor Jim Schmidt noted that he had voted to keep it open but when he loses a vote he does his best to accept the results and move on to the best scenario. “I was very discouraged to see the email from the county manager and I get the feeling he doesn’t feel Crested Butte citizens are part of the county,” he said.

The email from county manager Matthew Birnie to members of the STOR subcommittee dealing with the RV Dump issue stated that the action was “…another unfortunate example of a preference to export the impacts of their tourist industry’s impacts down valley and should be met with condemnation, not accommodation,” he wrote. He opined it wasn’t worth “spending time on trying to find collaborative solutions” under the circumstances.

Houck admitted Birnie’s response was venting some frustration but made clear that policy decisions were made by the commissioners, not the manager. “When the issue of neighborhood concerns was first brought to STOR about six months ago, all of the partners agreed it needed to be addressed. This isn’t like deciding where to place picnic tables or flower boxes. Moving infrastructure takes time. STOR would like reconsideration of the council decision. I have been spending a lot of time looking at land that might work in and nearby town. There are technical questions to answer and policy decisions to decide. For example, would the council be willing to extend utilities outside of town to a place that could work? Is that even possible?

“But the council decision honestly makes it a harder lift for the regional partners,” Houck continued. “And the perception of the messaging coming from the town, whether intentional or not, is ‘thanks but no thanks – just take it down to Gunnison.’ We all need to work to find an answer to deal with this but the understanding of the STOR was that the town would mitigate the impacts to the neighborhood while we all figured it out. It was surprising when that didn’t happen.”

“The council recognizes it was a more weighty decision than deciding where to place picnic tables and flower boxes,” countered councilwoman Mallika Magner. “Council received a petition with 150 names of people impacted by this. Where do the parties suggest it be located?”

“The picnic table comment context was about nimbleness,” replied Houck. “Locating infrastructure is not something you can do on the fly. We showed up at a meeting to consider possible appropriate places and a decision had already been made. It is your decision as a town to make but the county doesn’t own a wastewater treatment plant in the north end of the valley. I understand the impact to that part of the community. I have friends who live there. But the message sent was that Crested Butte just wanted to offload the problem somewhere else. The STOR committee asked several questions related to moving the site and was waiting on answers and we didn’t get them.”

“Why is the council decision forestalling progress for another location,” asked Magner.

“The STOR subcommittee’s understanding was that town staff had ideas to mitigate the neighborhood problems while allowing the safe disposal of RV waste. The town decision was made without any heads up to the partners,” explained Houck. “Decisions have consequences and there are a lot of things the committee is looking at.”

“To hang it on us because we are taking care of our community is not right,” said councilwoman Laura Mitchell.

“That’s not meant as a threat. None of the partners knew that decision was coming,” said Houck. “This is a hard conversation but an honest conversation. If the town doesn’t see it as a priority, why would the county and STOR? Is the RV dump more important than other things? I don’t know. I’m not looking for a fight, I’m just trying to be honest. The regional partners were taken aback by this decision. We all benefit from tourism and it has impacts. It is part of the economy we have. I’m being honest with how the partners are receiving the message.”

Mitchell suggested that perhaps a dump could be part of the new transit facility planned for the Whetstone Industrial Park that has plans to dispose of waste collected on long haul buses. Schmidt suggested the idea of using a holding tank that would be pumped regularly by a commercial business and disposed of in either Gunnison or Crested Butte.

The council STOR representative is Mona Merrill who was on spring break and not at the council work session. Town community development director Troy Russ said Merrill had debriefed staff about the STOR subcommittee meeting and staff is ready to have continued conversations if the council requests it.

“I think Jonathan has brought up some valid points,” said councilman Will Dujardin. “If people thought closing it was a serious option, I think more people would have had a deeper conversation about it at the last meeting. One of our core values as a council is to seek collaborative solutions to regional and local issues. I think we need to revisit it at a later meeting when people know we will be talking about it.”

Citizen Kent Cowherd said the estimated $45,000 in temporary mitigation measures would be a hit to town and wondered if the partners would help with the cost. Houck said he was open to it so “everyone could get skin in the game” but pointed out spending money on temporary solutions is something every government does.

Houck said he would make himself available when the issue came up as a future agenda item.

At the end of the town council meeting, Schmidt said he had heard from some councilmembers including Merrill that the topic should be revisited.

“I admit that I possibly made a mistake and am willing to revisit it also,” said Mitchell. She said she would be missing the May 3 meeting so council agreed to put the RV Dump issue on the agenda for the May 17 council meeting.