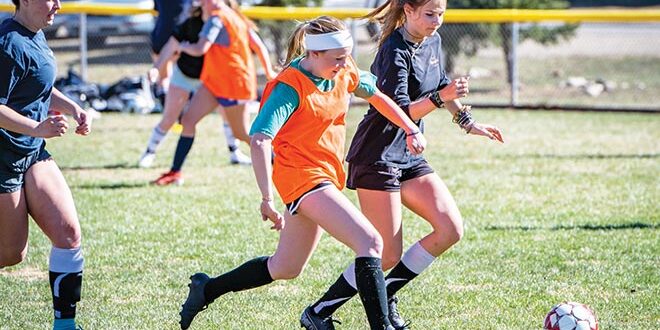 It’s been almost two years since the Crested Butte Titans girls soccer team has been able to play but they are finally back at it and couldn’t be more excited.

“The first practice they were like horses out of the gate,” says head coach Julia Kidd. “They’ve had great energy.”

Just like all of the high school sports this year, the girls soccer season has undergone some changes just to make it happen. For starters, it has been shortened to just 10 games for the regular season. But even crazier is that since the spring sports season has been pushed back in the calendar, they started on April 26. Therefore, if the Titans make it all the way to the state finals, they won’t be done with their season until June 26, well after the end of school. And with seven seniors on the Titan team, there are some questions as to who will remain playing high school sports after their graduation. While some of her seniors have said they’re in until the very end, others may have to leave upon graduation to start working and preparing for college.

“It’s been a little tricky as a coach to figure out what we want to do,” says Kidd. “How I keep their energy and enthusiasm.”

As a result, Kidd and her team have decided to just go for it with the seniors leading the charge and if some have to leave once the school year is over, then they will adjust accordingly and continue to press on as a team.

“It’s a weird dynamic but the team is bigger than just the seniors and there is talent behind them,” says Kidd. “We just have to go at it with everything we have and then march on without them.”

Kidd and the players are also seeing some benefits to the later start though. In the past, the Titans never even got to train outside until midway through or even not until the end of the season. This year they’ve been on grass since day one.

“It’s so amazing to be able to start the season playing outside on grass and warm,” says Kidd. “There are some positives to the later season for sure.”

In addition, with no season last spring, the players were so amped to get back to action that when Kidd posed the option of voluntary preseason workouts, the team jumped on the opportunity four weeks in advance of the official start date.

“Every single one who wasn’t already playing a sport showed up,” says Kidd.

So with earlier workouts and sessions on grass, Kidd sees her team of 30 players further along than any of her previous six seasons coaching.

“Every year I’ve coached it’s gotten better and better,” says Kidd. “Making the teams and splitting JV and varsity has been hard. There are a lot of kids on the bubble. I think a lot of it comes from playing for WESA, seeing the success of the boys team and they’re just in now from a young age.”

Seeing what they have seen so far, Kidd and the players have their sights set on another trip to the post season as a goal this season as well as to enjoy the fact that they are back at it after missing the season last year.

“That’s where we need to set our sights, that is the goal, to make it to the state tournament again,” says Kidd. “I haven’t really been able to be with them for two years so I’m just trying to enjoy the time I have with them.”

They open the season at home on the Crested Butte Community School soccer field on Friday, May 7 at 4 p.m. against Center and then hit the road the following day to play Del Norte.