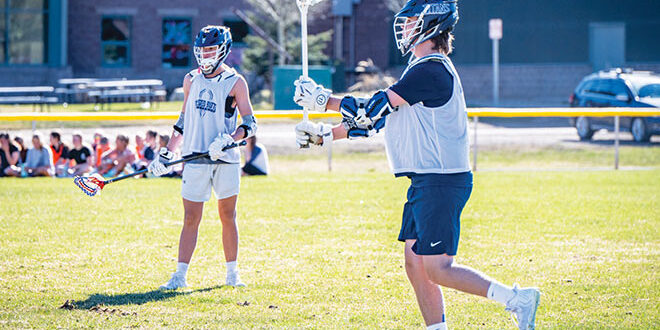 “It’s about learning the game and growing the program”

With interest in lacrosse growing locally through the West Elk Lacrosse club program and in Gunnison through Parks and Recreation, the Crested Butte Community School has now added lacrosse to their slate of high school sports and their inaugural season is currently underway with players from both Crested Butte and Gunnison playing on the team.

Leading the charge for high school lacrosse is head coach Buck Seling. Seling has a long history with the sport having played in high school in Maryland, in college at Mount Saint Mary’s University and when he moved to Colorado in 1999, Seling was instrumental in building high school lacrosse at ThunderRidge High School and throughout the Highlands Ranch area of Denver.

“I just love the sport,” says Seling. “When we started at ThunderRidge we had 24 players and it grew into three teams with a varsity, a JV and a freshman team.”

Seling then moved to Crested Butte six years ago and started helping out with the West Elk club program when and where needed including a season at the u10 level. Once he heard the high school was starting a program, he jumped at the chance.

While the season officially started on April 26, Seling got word out about voluntary practices starting April 5 and the interest was there when players were available.

“Some were still playing other sports or doing other things but we had 85-90 percent of the available players showing up,” says Seling.

Now with the season in full swing, Seling has 21 players on the squad, 16 of whom are freshmen and sophomores, with the initial focus on stick work, some conditioning and introducing the unending nuances of the game to players with a variety of experience.
“Some guys are brand new and some have been playing for seven years,” says Seling. “It’s been interesting.”

He’s also been making sure to build some team energy among the players no matter what level of player they are with the Titan Lacrosse Challenge, a series of competitions that are not necessarily focused on lacrosse.

“We’re trying to instill having fun as well as, build a bond between each other,” explains Seling. “Keep their interest, and not just completely focus on lacrosse.”

To help with the process, Seling has a staff of heavily experienced lacrosse players with collegiate experience. Len Mason is his assistant coach with Eric Walker, Jessica Wurtz and Sam Shearin helping out in volunteer positions.

Per Colorado High School Athletics rules, new programs must first go through a two-year period of JV competition before jumping into the varsity fray. While that, and the COVID shortened season, presents some scheduling difficulties, RE1J athletics director Jarrod Hinton and Seling have managed to find nine games for the Titans and are working on three more to the schedule if time and availability permits.