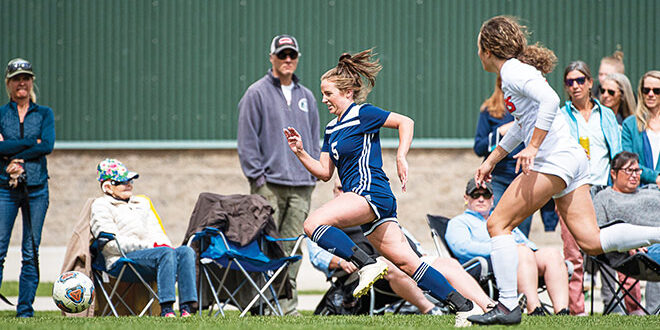 Titans soccer back on winning track

In position to make state tournament

After dropping their first and only challenging game of the season last week, the Crested Butte Titans girls soccer team returned to their winning ways with big wins over Del Norte and Center and are now 4-1 and ranked fourth in the 2A standings statewide.
The Titans’ season has been quite the rollercoaster with their only true opposition in league play coming from Ridgway and Telluride. As a result, it’s been hard to continue efforts to pick up the pace of their play when their other games end in massive blow-out wins.

They handed the Del Norte Tigers a 10-0 loss earlier in the season but rumor had it that the typically stronger program was missing all of their seniors in that first match. As a result, the Titans were looking forward to a tougher match with Del Norte the second time around on Thursday, May 20 but that never came to fruition as Crested Butte rolled to another 10-0 win.

Crested Butte went right to work in the opening minutes of the game focused on attacking the right flank with Olivia Wilson and the strikers making corner runs. The effort paid off three minutes into the game as Wilson clipped across into the 18-yard box and Leigh Harpel clipped the ball over the Del Norte goalkeeper’s outstretched hands.

Crested Butte continued to press high on Del Norte as the back line of the Titans’ defense led by Emmie Houseman held tight at the midfield line and feeding the ball back into attack.

The Titans scored three more times in the first half with Hazie McNellis, Maddie Bogard and Stevee Reinhardt all finding the back of the net for a 4-0 lead at halftime.

“They played better at moments but it’s still hard to keep up any pace with no one pressuring the ball from the other team,” says coach Julia Kidd.

The Titans then stepped things up the second half to tack on six more goals to finish with a 10-0 win for goalie and birthday girl Mara Pennie’s third shutout of the season. Reinhardt, Nevada Scales and Bogard each scored two goals with solo strikes coming from McNellis, Wilson, Harpel and Havelin Haskell and Campbell Ryan racked up a number of assists.

“Things came together better in the second half,” says Kidd. “Ellie O’Neal and Leigh (Harpel) looked good moving the ball, taking it out of chaos and not putting it back into the chaos.”

The Titans then headed to Center two days later to face a depleted Center squad. With numbers down, the teams were forced to play eight against eight and the Titans rolled to another 10-0 win finishing the game off by halftime.

“Center’s had a rough season and they just seemed to quit,” says Kidd. “And our girls wanted to get home for prom.”

Bogard and Harpel each scored two with solo goals coming from six other players again.

“Our scoring is spread out which is nice,” says Kidd.

The Titans have another easy match this week against Ignacio and then have a non-league match with a stronger Buena Vista team. They get another challenge on Tuesday, June 1 when they hit the road to face the Ridgway Demons.