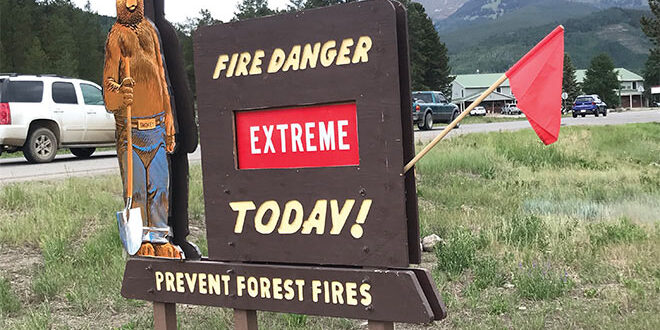 As local drought conditions have worsened and wildfires have broken out across the state and the West, Gunnison County joined the list of counties in the region to impose Stage 1 fire restrictions this week. The Gunnison County sheriff’s department, in coordination with the Gunnison Basin Wildfire Council, has enacted a Stage 1 fire ban effective Thursday, June 24 at 12:01 a.m. The restriction is in effect for all U.S. Forest Service (USFS) and Bureau of Land Management (BLM) land as well as all municipalities and unincorporated areas within Gunnison County.

Stage 1 fire restrictions prohibit any open flame that is not in a permanently constructed fire ring in a developed campground or picnic area; smoking in an open area; fireworks or explosives; and restrict operating a chainsaw and welding or other use of a torch with an open flame.

The decision to go to Stage 1 restrictions came after the Wildfire Council’s meeting on Wednesday, June 23. This was the first time the sheriff’s department has exercised its new authority to impose or remove Stage 1 or 2 fire restrictions since Gunnison County commissioners passed a formal resolution to that effect on Tuesday, June 22.

Gunnison County emergency services director Scott Morrill said the Wildfire Council has been meeting weekly since April of this year to keep a close eye on fire danger and forest fuels within the county. “Which is pretty early,” he said. “But when conditions get like this we want to be in regular communication because things can change quickly. In the wetter years, we will meet every month or every two months.”

Morrill explained that he defers to the expertise of both the USFS and BLM officers who have instruments to go out in the field and measure forest fuels. While the Gunnison Valley has been in better shape than many surrounding areas, persistent drought conditions have tipped the scales.

James Ramirez, east zone assistant fire management officer with the Grand Mesa, Uncompahgre and Gunnison National Forest (GMUG), just returned from the Robinson Fire in Wyoming and described the intricate system through which the USFS determines fire danger for a given area.

“We use science, predications, modeling and data collection to give us the best picture possible for our decision making. We use a combination of the National Fire Danger Rating System (NFDRS) and taking fuel moisture samples from our local fuels.  The NFDRS takes weather inputs from our Remote Automated Weather Stations, that are placed throughout the forest and comes up with calculations to inform us on the status of our fuels.

“We then take local samples to also compare with on site readings. Here we take live and dead fuels and dry them in an oven to get our numbers.  The NFDRS gives out several different outputs, but the biggest numbers we look at here on the GMUG are ERC (Energy Release Component) and BI (Burning Index). These numbers are compared to historical averages from the previous 11 years to give us an idea of how dry we are compared to previous years,” explains Ramirez.

Ramirez says we are in better shape than other counties due mainly to our higher elevations and proximity to the Continental Divide, which typically gets more moisture from storms.

“While we have similar fuel types to other areas, they are also different, if that makes sense; for example no two areas are exactly the same. Typically our fuels dry up slower than other areas, but this year with the high temps and low humidity we are seeing drying quicker than normal.  There is a lot that goes into this,” says Ramirez.

The new authority for the sheriff’s department is meant to allow for faster decision-making and clarity for the public. While commissioners were previously required to pass restrictions in a publicly noticed meeting, they can now ratify the sheriff’s decision during their next scheduled meeting without delaying the action. The county can now more quickly coordinate with USFS and BLM fire restrictions.

County attorney Matthew Hoyt reviewed the new resolution. “It also provides some checks and balances in that the sheriff is to check with the board [of commissioners] within three business days, formally, to let the board know of the decisions chosen by the sheriff, “ he said. “It also requires the sheriff to consult with other fire managers in the county so he is not making this decision on his own.” The resolution will sunset at the end of the year, and sheriff John Gallowich agreed that at that time he would like to consult with commissioners about any fine-tuning needed.

In the meantime, Gallowich said he would remain in close communication with commissioners wherever possible.
“I think it’s a good idea, and at the end of the season we can get together and see if it worked well,” said Gallowich.
“I think this is a good move, and it’s going to make it much easier to respond as things change with this drought,” said Morrill.

Fire restrictions are now in place in all counties to the north, west and southwest of Gunnison County, and the Pitkin County sheriff implemented Stage 2 restrictions there on Tuesday. The White River National Forest is going to Stage 2 fire restrictions on Thursday at 12:01 a.m.