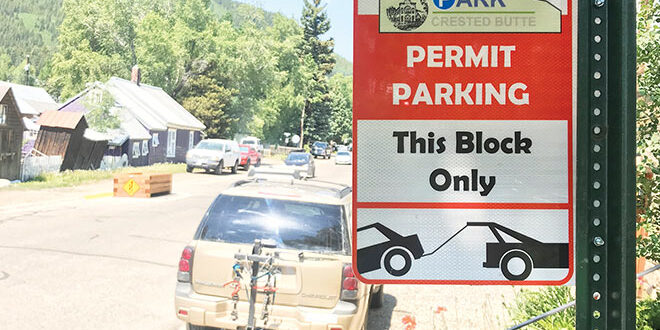 Not enough permits a problem?

Crested Butte’s new pilot parking management plan begins this week and the expectation on every front is that the implementation will bring challenges and growing pains. The town council approved the program without much enthusiasm Monday along with new parking fines with the intent of opening up more parking in the core area of town.

Concerns over the lean number of permits being distributed to both residents and businesses were again voiced and community development director Troy Russ and town planner Mel Yemma emphasized that the program was a work in progress that had flexibility to adjust on the fly.

Interstate Parking out of Denver will be administering the parking management program and warning tickets will be issued until July 5 when citations with fines will start being handed out. Town staff will be closely watching parking availability in the pilot area over the next two weeks and if it is determined more spaces than expected are free, more permits will be distributed.

Parking fines will be increased so, for example, someone violating the two-hour limit on Elk Avenue will get a ticket for $32 instead of the current $20.

“I have already received complaints from neighbors on Maroon and Sopris concerned about just having friends wanting to come by and visit and getting ticketed if they don’t have a permit,” said mayor Jim Schmidt.

“I’m hearing a lot of feedback that businesses getting just one parking permit for their employees is an issue,” added councilwoman Mallika Magner.

Russ said once residential permits were accounted for, 155 permits were available for businesses. Each Elk Avenue business is entitled to one permit and some that paid a parking in lieu fee will be given two.

“For the first year we felt this was the most equitable way,” said Yemma.

“The long-term public parking lots (at First and Elk, the Four-way Stop and by the CB Fire Hall) are available for free to employees also,” said Russ.

Magner suggested taking one of those lots and dedicating it to employee parking. Russ said that was not considered since public lots should be available to the public given the two-hour parking restrictions on Elk.

Councilman Jason MacMillan said he has heard from residents worried about not having enough permits for the vehicles associated with their homes.

“We’ll be conducting parking studies every day leading up to July 5 and Interstate will be monitoring the situation all summer,” said Russ. “We assume 65 percent of the spaces on Maroon and Sopris will be used at any one time so there should be available spaces and we can adjust permitting accordingly. We will gain a lot of knowledge over the next two weeks.”

Councilman Will Dujardin suggested instead of issuing permits to businesses the town should deal directly with employees.
Russ made it clear that if council approved the pilot program it was too late to change the process since some permits had already been distributed.

“Parking is a precious resource and we have ample parking on the public lots,” he said. “Everyone would love to park right in front of where they work but that won’t happen. This plan is a way to manage the parking.”

Schmidt repeatedly voiced his displeasure with the plan saying he thought focusing on just the two-hour parking limit on Elk Avenue would be more than sufficient to manage parking. “What happens when the plumber needs to work on a house or a house cleaner comes to service a home? What if I want to visit a friend for a half hour? I see lots of problems with this. I think we are going too far ahead.”

Russ and Yemma said Interstate representatives would be very accommodating to unique situations and permits were available for contractors.

“This is the first step in the managing parking resource and we know it’s not perfect,” said Yemma. “But we can adjust moving forward.”

Citizen Alex Richland pointed out that many homes on Sopris and Maroon house several people. Russ said most houses would receive between one and three parking permits.

“We’re in a housing crisis so if a house has six locals living there it should be given extra permits,” Richland suggested.
Russ said that sort of information will probably come to light in the next two weeks. “The plan’s priority was to prioritize residents and accommodate businesses,” he said.

Martha Keene expressed concern that workers driving in from Gunnison or CB South would end up with parking tickets thus penalizing the workers already under pressure in the valley. “They don’t have a place to live and now some will get tickets to park when they go to work? That needs to be taken into consideration.”

Lauren O’Rourke said she was having trouble finding any contact with Interstate Parking. Russ said there is a link on the town’s website to parkcrestedbutte.com.

“I haven’t heard anyone say this a great idea that will work,” said former mayor Alan Bernholtz. “I get that it’s not easy and a lot of work went into it. But a lot of people can live in one house and would need parking permits. What happens when my kids start to drive? If someone lives in a house they should be able to park on their block. Why not have parking permits for the entire town? This is opening a can of worms.”

Bernholtz said he has four vehicles and wondered where he would park them if only issued two permits. Russ said his extra cars were a low priority and he would have to park them out of the Sopris permit zone. He said a town-wide parking system was probably coming in the future.

“You have to get into the hot tub slowly,” he said.

“You obviously don’t know me at all,” retorted Bernholtz to laughs.

Russ said everyone understands the initial implementation will be difficult. “The first time is really hard and we will be all ears and try to adjust and make it work,” promised Russ.

Other issues mentioned in the long discussion included monitoring the post office parking lot to free spaces for those coming to check their mail, preparing for parking issues when Alpenglow begins at the Center for the Arts, and accommodating the not unusual situation of employees who are injured.

“I appreciate the complexity of this,” said councilman Chris Haver. “Down the line it might not be worth doing the one-way traffic on Elk Avenue given the impacts. But I hope this plan can be flexible. Let’s try it and see.”

Council agreed 5-1 with that sentiment with Schmidt voting against the plan and councilwoman Mona Merrill not able to vote by Zoom given some technical issues. Be aware of where you park this summer.