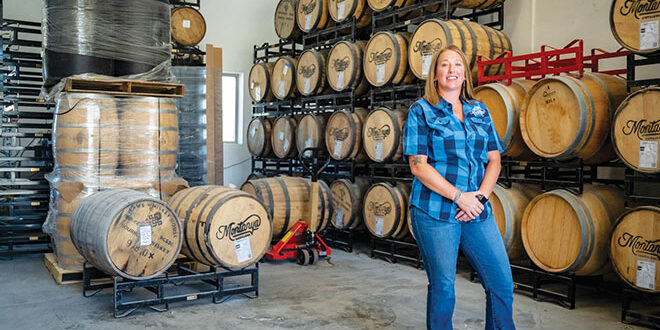 — Of Rollerskates and Rum —

Crash is my nickname,” Renée Newton laughs and explains, “it was my roller derby name.” The roller derby queen played on a team that she helped to start in Wilmington, North Carolina in 2005. “I was always an athlete and around that time there was a big resurgence of women roller derby teams. My best friend and I and a few other town girls started the Cape Fear Roller Girls,” she says of the team that’s still playing the circuit.

She played with them for eight years before moving to the Gunnison Valley, sight unseen, where she became part of the notorious Gunnison Valley Roller Girls, who successfully competed for three years. The team would travel all over the U.S. to play tournaments. “We were kind of a big deal, for being from a smaller town. When we had the team in CB we were on the front page of all the local newspapers. Than Acuff was pumped to have a new sport to cover,” she surmised. “In the summer, we had really amazing spaces to skate in, like Jorgensen rink in Gunnison and the Big Mine ice rink in CB.” Roller derby, for the uninitiated, is a sport played on rollerskates where two teams compete for points, which are earned by the “jammer” who racks up a point each time they are able to pass the opposing team’s “blockers” on the track.

Renée was born in Brunswick, Georgia, to a boat captain who raised her after her parents divorced when she was in third grade. “He’s captained many a tug boat, pushing barges up and down the Mississippi,” she tells. She and her two siblings relocated quite a bit for their father’s work, living on St. Simon’s Island off the coast of Georgia, then Florida, Virginia, Louisiana and ending up in Wilmington, North Carolina during her high school years. “I went to three different high schools just in my first semester of my freshman year. But we were lucky as kids of a boat captain because even though we moved a lot, it was always to a beach.” So for Renée that meant body surfing, boogie boarding and surfing, and of course, there was lot of boating. “We were free range kids. Dad worked a lot so there wasn’t much parental supervision,” although, she says, they spent a lot of time in New Orleans with grandparents.

After high school graduation, Renée attended the University of North Carolina at Wilmington. “I was always scientifically inclined, so I went to college for biology, initially to work with plants,” she says of her coastal botany focus.

She had a minor in both chemistry and French language, spending a semester in Marseilles her junior year and graduating in 2006. “I thought I’d teach high school because I’m a good teacher. I’m extroverted. But then I realized that high school children were terrifying,” she laughs. So of course, she waited tables after graduation, and was also running a large greenhouse of tropical plants in North Carolina.

The catalyst for Renée to leave was twofold: she had broken up with her boyfriend, and she decided to try to reconnect with her estranged mother, who lived in Gunnison. In 2010, she packed up her car and made the decision to head west to Colorado. Having only been as far west of the Mississippi as Las Vegas for roller derby tournaments, Renée had never seen mountains before. “I cried the first time I saw them, sunrise coming up through Trinidad and then coming up into Gunnison.” She adds that she’d never seen a real cowboy before either. Her first job was waiting tables at Mario’s. “The first time it snowed, I woke up and thought SNOW DAY!” Driving a car in the snow was a new thing for her and she admits, “It was a steep learning curve for me to move out here in the middle of winter.”

Renée was couching it at a friend’s in Mt. CB while still working Mario’s, which she phased out to take a job at the Rocky Mountain Biological Lab (RMBL) in Gothic during the summer of 2010. Things weren’t exactly working out with her mom and she almost left the valley, but her buddy, Travis Hunter, convinced her to stay for that summer. “Obviously, I fell in love with Crested Butte, and Travis, that summer.” Renée worked at RMBL as a research assistant for a study that focused on respiration rates of sub alpine meadows. “It’s how much carbon dioxide a plant takes in and how much oxygen it then puts out. I really got to see a lot of the valley in different ways than you’re otherwise capable of because I had access to the private lots and where we would station for the testing,” she recalls of her three-year dawn and dusk schedule. In between those hours during the day, Renée would clean houses. It was shortly after she started her position at RMBL that she became Montanya’s rum distiller.

“At the time it was just me and Brice Hoskin (owner with his wife, Karen); I’m now the head distiller with an assistant.” Her chemistry education played prominently in getting the position where she now runs not only the production side of the distillery, but all of the actual distilling, barrel aging, maintaining the rack house where all the full, aging barrels are stored, bottling, purchase orders, shipping the inventory including all the sugar cane and Louisiana molasses, and more. She’s also worked every other aspect of the company, from managing the bar, to helping execute distilling events, conferences and tasting events.

“Rum is made from some form of sugar cane. Sugar cane, molasses and yeast is fermented and then distilled and put into used whiskey barrels for a minimum of a year,” she says and explains that she has four batches of rum fermenting simultaneously. “Fermentation takes a week and distillation takes a day, about eight to 10 hours.” That produces about two barrels a week, which translates to about 800 bottles. They’re then distributed in 45 states as well as internationally. “But our biggest client, hands down, is Colorado. It’s been fun to be a part of that growth of the company.”

Now in her eighth year at Montanya’s, and in the valley for 11 years, Renée says, “It’s the longest time I’ve spent consecutively in one place.” However, Renée’s seeing the changes rapidly unfold in a town with non-existent affordable housing for its service workers. “It’s been tough to watch the changes. When I first moved here, there were places to live, a large selection of places to rent, and it wasn’t as easy to get a job, especially in off-season. Summer wasn’t a panic. We had open access to hiking and lakes and you could really be in the moment and enjoy yourself and not be completely swarmed by tourists. Don’t get me wrong, I understand why they want to come here. I think the balance should have happened four or five years ago, taking the Airbnb (predicament) seriously, having a plan for more local housing, a plan to address the impending problem. We were watching it happen all around us, in Vail, Aspen, Breckenridge, they were feeling that labor housing crunch before we were. It feels like no one was listening. I don’t think that the town council doesn’t care, it’s just that we’re so late in the game. Everyone’s just upset and I don’t think there’s an amicable way to get through it,” Renée feels.

“One of the things that made me fall in love with this place is being able to get outside, and being with yourself in nature, being able to ground without 12 Yukons and all the other cars at the trailhead. Summer’s so stressful now, everyone’s working so hard, so you’re not getting outside to enjoy the reason you’re living here. You’re pushed to the point of burnout all summer so it’s hard to remember why you’re here when you’re not getting to do those things you love without feeling suffocated.”
Renée still gets out into nature but she says, “I just find I enjoy it a lot less. Like going to a campsite and finding a fire still burning. I think the rate of tourists will slow down though because they don’t want to wait an hour and a half for breakfast and a lot of restaurants are closed during the week now on Tuesdays and Wednesdays,” she says of the staffing shortage due to the housing shortage crisis. “It just feels like it can’t continue like this.”

Renée is one of the fortunate ones who, with her friend, Scott McKenrick, invested before the real estate fever hit. “I feel I have found home. I bought a house in CB South before everything got so crazy. I haven’t given up hope. I don’t think the majority of us have given up hope yet. We live in a community with intelligent and talented people who won’t be inactive in helping to figure out solutions. As hard as we are on the tourists these days, it’s still a loving and accepting community. I’m proud to have become a part of that community and to have been allowed to put some roots down here.”