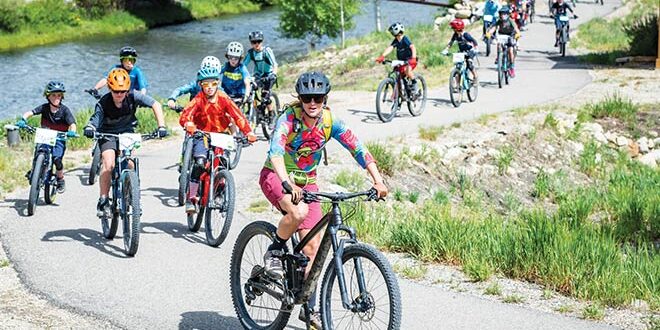 While there are plenty of kids bike races throughout the state and country, Crested Butte Devo (CB Devo) and executive director Amy Nolan took it to another level to put together Junior Bike Week June 21-27.

“We pulled it off, it was a trip,” says Nolan. “I can’t emphasize enough though, we’re only as good as our volunteers.”
The week was stuffed with activities such as movies, entertainment from a professional trials rider, pizza and ice cream parties in addition to racing races as Junior Bike Week was more than just about racing, it was also about having fun on bikes.

“What makes this festival special and unique is the balance of racing and still being a good fit for families and supporting bike culture. Being on a bike with your family,” says Nolan.

And the families and their kids showed up, more so than expected. For example CB Devo was hoping for as many as 50 kids to participate in their Triple Crown series of enduro, pump track and cross-country events and 150 to line up for the Junior Wildflower Classic cross-country race. In the end they exceeded both expectations with 89 kids entered and 63 finishing the Triple Crown and 204 lined up for the variety of age classes in the cross-country race.

“That was great and it exceeded our goal,” says Nolan. “I think part of that was due to COVID and everyone chomping to get back into it but also I think families were stoked to have a festival about their kids.”

The event wasn’t without its challenges, specifically the weather. Fortunately, Mother Nature cooperated for the most part with heavy rains coming before or after events, rarely during them. There was some extra effort needed to dry out the Bike Park prior to the pump track challenge and other events slated for that day at that location but puddles were pumped out and the venue was in great shape when it was time to hit the park.

Nolan believes a lot of the success comes from the overall layout with the Bike Park, Tommy V Field, school parking lot and gravel pit and Town Ranch providing the perfect headquarters for the week as well as partnering with other entities such as the Land Trust to pull off the cross-country race.

“I think what we have here in Crested Butte is a really special situation,” says Nolan. “There’s super special synergy between the community and the facilities to support the event.”

Nolan and CB Devo now look to the next Junior Bike Week June 20-26, 2022 and while success can facilitate growth, Nolan is committed to quality over quantity.

“It’s totally feasible to have 500 kids here but I don’t think it’s the right move,” says Nolan. “Bigger numbers can work against you. I really want to be able to provide a fun, safe and quality experience for the families to come to.”