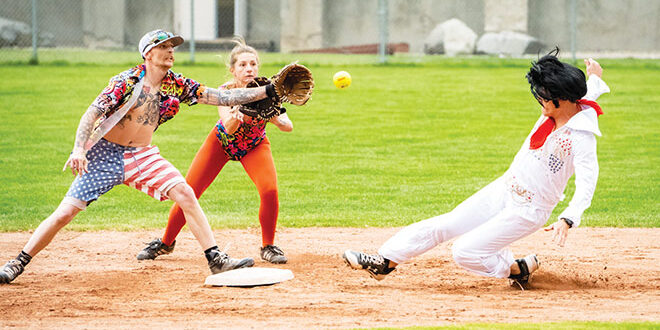 Wednesday night, the first thing I saw when I approached Gothic Field to cover the annual Pitas OG’s/CB Extreme costumed softball game, dubbed Viva Las Vegas this year, was a woman in a pinstripe suit offering up pulls from a bottle of tequila. Here in Crested Butte, that should be a solid yes.

In Las Vegas? Not so much.

In fact, when a concierge in Las Vegas tells you to take the family to check out Fremont Street but make sure you leave before it gets dark, do that. Because, if you don’t, which we didn’t, my child, and me too really, had the unfortunate experience of seeing a topless nun with a baby mask on, also handing out shots of liquor. I’ve seen some weird stuff but that was creepy weird. Who knows how that affected my child, she was 9 at the time, but I’m sure it will come out later in life.

Or, she got a glimpse of the weird and will be better prepared when she comes across it again, which she will.

Ultimately, her only question was, “why are men paying her to get their picture taken with her?”

Now here was an opportunity for a “teachable moment” and I could have taken the time right then to explain some things but when the topless nun baby (not to be confused with puppy monkey baby) sighting appeared to be tame compared to what I then saw over my daughter’s shoulder, I decided it was best to just leave.

But, like I said, say yes to a pull off a bottle of tequila at a Crested Butte softball game.

Speaking of tequila, it was all warm and fuzzy at the start of the Viva Las Vegas game with numerous people dressed for the occasion. Several men, and one woman, opted to go as Hunter S. Thompson, only a scant few dressed as Elvis and two came to the game as a wedding chapel couple among other assorted randoms who looked as if they just went with whatever fell out of their closet when they opened it prior to the game.

And in an effort to further facilitate the party atmosphere rather than a game, Stichter, who plays for CB Extreme, suggested the two teams share the same dugout, which they did. It was kumbaya all over the place, but as the evening continued, what started out as a party resulted in the best game of the year so far.

It took a while though, or some alcohol, to loosen up the players, as the two teams muddled through the first three and a half innings with CB Extreme taking a 2-0 lead into the bottom of the fourth.

Then the game came to life like Fremont Street after dark, except without a topless nun baby as the OG’s went off on CB Extreme scoring 14 runs in the next two innings.

Sam Reaman, Rayna Clark and Drew Grigsby started it off with a succession of RBI base hits. Pip Bailey, or Phillipa Bailey, followed with a RBI double and South American Monica Llavador, who just learned the game the week prior, tapped a RBI single.

The CB Extreme bats remained not-so-extreme and the OG’s continued to pour it on like a shot of tequila from a topless nun baby driving in eight more runs in the bottom of the fifth inning. Mallory Zimmerman led off with a single and then scored on a two-run home run from Reaman. Clark, Grigsby and Lisa Vukovich all singled to load the bases and Dakota Wiggins golfed a “weird area” two RBI double. Mike Yeager kept it going with a sac fly RBI, Lisa Geringer blooped a RBI single and Zimmerman capped it all off in her second trip to the plate with a two RBI double and a 14-2 lead.

Of note, my speculation that alcohol was the source of their success was affirmed when Wiggins said to me following their two-inning outburst. “I got the perfect ratio, three beers per guy and two per girl and we start hitting.”

But, then what? Because you can’t tell me when you’ve put down a couple of beers and you start winning that you are going to say, “Hey, I better quit while I’m ahead.”

Reminds me of another Las Vegas story when a friend came back to the room after an evening at the tables with pots of cash and said, “it’s so easy.” Only to return to the room the next morning near penniless.

And the same can be said for the OG’s as what appeared to be so easy soon turned into a pressure cooker of a battle as CB Extreme soon pulled back into the game.

It all started with what Dakota said and then went from there.

Andrew Tower got things going with a lead off double into the netting in left field. A walk put two ducks on the pond and Rhett Yarbrough cleared the bases with a three-run home run to right center. Drew Holbrook drove another run home with a triple, Jess Minkvestleopardpants stroked a RBI single and Stichter cracked a two-run shot off of the Town Hall roof in right to pull within five runs of the OG’s.

Yarbrough kicked it into high gear in the top of the seventh with a three RBI triple, Mick Demi singled to score another Extremer, Minkvestleopardpants connected for another RBI base hit and a couple more base hit RBIs had CB Extreme on top 17-16 heading into the bottom of the seventh.

Down to their last chip, the OG’s made one last bet in the bottom of the seventh inning and it paid out as Zimmerman led off with a double, Reaman scored with a double to tie the game and Grigsby walked to put the winning run on third base setting the stage for Vukovich. She stepped up and proceeded to slap a single scoring Reaman to salvage a horrid run at the table as the OG’s escaped with an 18-17 win. Topless nun baby would have been proud.