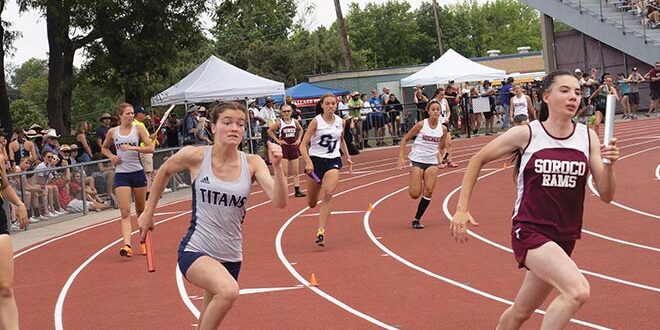 Titans track and field closes out season at state championships

Crested Butte Titans track coach Mitchell Robertson designed a training plan for his athletes and once the season’s end came to fruition, so did the plan. Nine Titans track athletes qualified for the 2A state championships Thursday through Saturday, June 24-26 and finished the three days of racing with two individual state titles as well as four other trips to the podium as nearly every Titan ran either a personal or season’s best time when it mattered most.

Robertson explains that some can train short and then long later in the season while others can train long at the start and then go with short training, i.e. speed and power, toward the end. And that’s what Robertson decided for his athletes as they ramped up speed and power training for the last three weeks of the season.

“I believe as the kids feel themselves getting faster, it boosts self-confidence and that’s number one,” says Robertson. “We ramped it up as it got close and everyone was peaking at the right time so everyone was where they needed to be.”

Crested Butte had one last meet prior to the state meet, the Last Chance at Jeffco Stadium on Saturday, June 19. While Connor Williams and Ruby Pendy had secured their spots at the state meet, both relay teams were on the cusp and needed one more meet to seal the deal.

“Our relays were right on the edge and I wanted to give them an opportunity to secure their spot, which they did,” says Robertson.

Then with the miles, speed and power work in and spots at the state championships officially secured, it was now up to the athletes to put their training to the test and they all came through.

Williams led the Titans coming into the state meet as he qualified for the 800 meters, the 1600 meters and as part of the boys’ 4×400-meter relay team and fresh off the training plan Robertson had laid out.

“He had that rolling into state and it showed,” says Robertson.

Williams doubled down in the 1600-meter run as he took the starting line seeded second, but considerably far back from the number one runner in the state, only to battle step for step with the number one ranked runner outkicking him to win the state title with a time of 4:19.99.

“He ran an excellent race and just broke that guy with 250 meters to go in the race,” says Robertson. “He was racing very confidently and it was nice to see aggressiveness, speed and confidence all pay off.”

Williams then joined Erik Wasinger, Davis McNeill and Porter Washburn to compete in the 4×400-meter relay. The four athletes placed fifth in the preliminaries to push into the finals and then ran their fastest time to date of 3:39.10 to place eighth.

“All of the boys ran well,” says Robertson.

Ruby Pendy is a burgeoning force on the distance scene among the girls statewide having really just committed to track and field after seeing success in cross-country and Nordic ski racing. Pendy entered the state meet ranked 10th but shed eight seconds off her previous best to run into ninth place and the final spot on the state podium.

“That’s a pretty significant PR (personal record),” says Robertson. “We just had to teach her confidence in speed. As a sophomore the next two years could be exciting.”

The girls’ 4×200-meter team of Ellie Duryea, Sam Merck, Hayes Freeman and India Nornes made the cut to the state meet as the 14th seed and while they did post a personal best time in their preliminary heat, they fell short of making it into finals.
“Anytime you PR at a race, it’s encouraging,” says Robertson. “They all ran really well and I think getting them to build confidence in what they are capable of is encouraging.”

Merck also made it to the state meet in the high jump and while she didn’t reach near her personal best height, she jumped high enough to finish in eighth place for her own trip to the podium.

“Overall, it was a good ending to a very short and odd season,” says Robertson. “I think, as a whole, we had some big realizations what it takes to be able to compete at a level they want to compete.”

While the results were positive and the finish strong for a handful of Titans with several athletes buying into Robertson’s plan and passion for the sport, he also appreciated the work and commitment of Freeman who was the captain of the team this season.

“She was missing one or two aspects of what it takes to be a captain when the season started and she really developed that and stepped into the role,” says Robertson. “I don’t know if I could have gone through the season without her help.”

Robertson also points out the effort and accomplishments of Pendy and Williams as well as the development of the program overall.

“I think the kids are getting it,” says Robertson. “We’re at the point where the kids want to commit and we need community support to help them. We’re at a crossroads. It’s exciting times and the community needs to match the energy.”